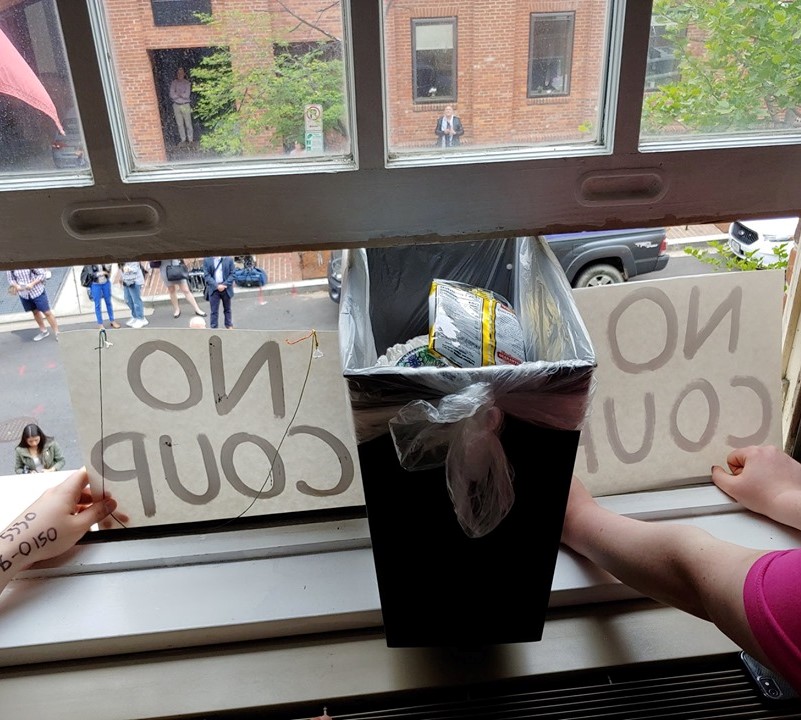 Members of the Embassy Collection Protective have written phone numbers of their attorneys on their arms.

By Pat Elder, World BEYOND War

It is Thursday evening and I am reporting from a meeting of the Embassy Protection Collective in the ambassador’s conference room in the Venezuelan embassy in Washington.

Determined activists are currently discussing the logistics of their continued struggle to retain possession of the embassy. They have managed to overcome a host of challenges since responsibility for the embassy was officially turned over to them when Venezuelan diplomats who represent the legitimate government of Nicolas Madero were forced out of the U.S. last week.

Activists are currently unable to enter the building. When members of the collective arrive at the embassy, Guaido supporters, right-wing extremists, sound an ear-piercing alarm, similar to the blaring sound of an emergency vehicle, to rally opposition folks to physically block activists from entering and to seize the opportunity to storm the compound. Meanwhile, Secret Service Police explain to the barred activists that they’re precluded from entering because they don’t have authorization from the “legitimate authorities,” meaning representatives from the Guaido government.

The dozen or so Secret Service officers seem to have bonded with a few dozen pro-coup forces who have displayed outrageous, unruly behavior like the blaring bullhorns that are sounded a few inches from the faces of anti-coup folks, many of whom had been in the embassy but left and were precluded from re-entering the building. The angry, combative counter-protesters have bullied the highly-disciplined peace activists and covered the ground floor windows with pro-Guaido literature.  The Guaido folks have been free to bang on the exterior doors while the police stand idly by. They have destroyed exterior surveillance cameras and destroyed embassy property.

Legitimate Venezuelan authorities with the Maduro government in Caracas say the possible takeover of the embassy in Washington by Guaido’s people represents a “grave violation” of the United States’ responsibilities and violates international law. Venezuelan diplomats gave the keys to the embassy to the activists with permission to remain until a permanent protectorate can be found.  President Maduro is aware of the situation and extends his support to the Embassy Protection Collective.

On Thursday afternoon, the Secret Service allowed in some food and medicine while the State Department has granted a meeting with members of the Embassy Protector Collective: Code Pink co-founder, Medea Benjamin, DC attorney Mara Verheyden-Hilliard, and ANSWER Coalition Director Brian Becker. As of Thursday evening, that meeting had not yet taken place. Meanwhile, activists in the compound are hopeful they can retain possession of the premises.

Verheyden-Hilliard slammed the Secret Service and the DC Metropolitan Police in a letter earlier Wednesday. She wrote, “Your officers are acting as aiders, abettors, encouragers, and joint tort-feasors in the assaultive, menacing, threatening and at times violent conduct against the lawfully present peace activists at the embassy by a mob of right-wing thugs,”

The activists in the embassy understand this is an historic moment. Adrienne Pine, an Anthropology Professor at American University, is among the members of the collective in the embassy. She echoed a theme among the activists that Americans generally have a poor grasp of history.  She explained her presence, “The 2009 U.S.-supported coup in Honduras led to a murderous, neoliberal fascist dictatorship. The subsequent U.S.-backed legislative coup that ousted Dilma Rousseff in Brazil led to Bolsonaro’s openly fascist regime, which threatens the survival of the entire planet. There is no way I could not be here, knowing what I do about where this coup—if successful—would inevitably lead.”