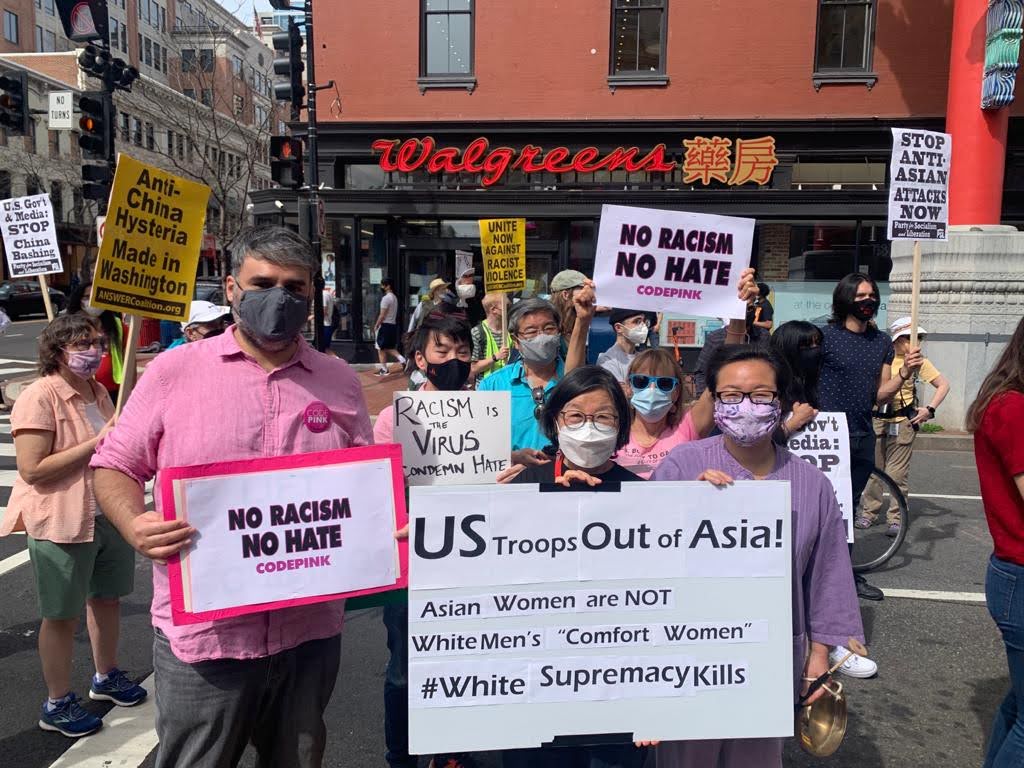 On Saturday, March 27th, activists rallied in over 60 cities and towns (including cities outside the U.S.!) for a National Day of Action against anti-Asian violence and China-bashing. This day of multiracial solidarity was a continuation of the Virtual National Day of Action and Healing on Friday, March 26th. Following the racist, misogynistic Atlanta, Georgia shootings and thousands of other reported instances of anti-Asian violence, CODEPINK and over 70 organizations joined the ANSWER coalition in standing in solidarity with the Asian & Pacific Islander community. The demonstrations drew significant coverage from mainstream media both nationally and locally. Saturday Night Live’s Weekend Update anchor Colin Jost even mentioned the National Day of Action, stating, “Across the country, rallies are being held to condemn the rise of anti-Asian hate crimes,” before a segment with cast member Bowen Yang.

Asian Americans, Pacific Islanders, and allies of all races and creeds came together in solidarity to collectively mourn and honor the victims of anti-Asian violence, including the six Asian women who were tragically murdered at three Atlanta spas on March 16th. A uniquely intergenerational Day of Action, the demonstrations included many first-generation Asian Americans and elders who were galvanized to come out for their first protest. Many speakers acknowledged and remembered the U.S’s long history of racism and xenophobia against Asian Americans, including the anti-Japanese discrimination in the U.S. during WWII and the scapegoating of Chinese migrant laborers in the Chinese Exclusion Act of 1882. 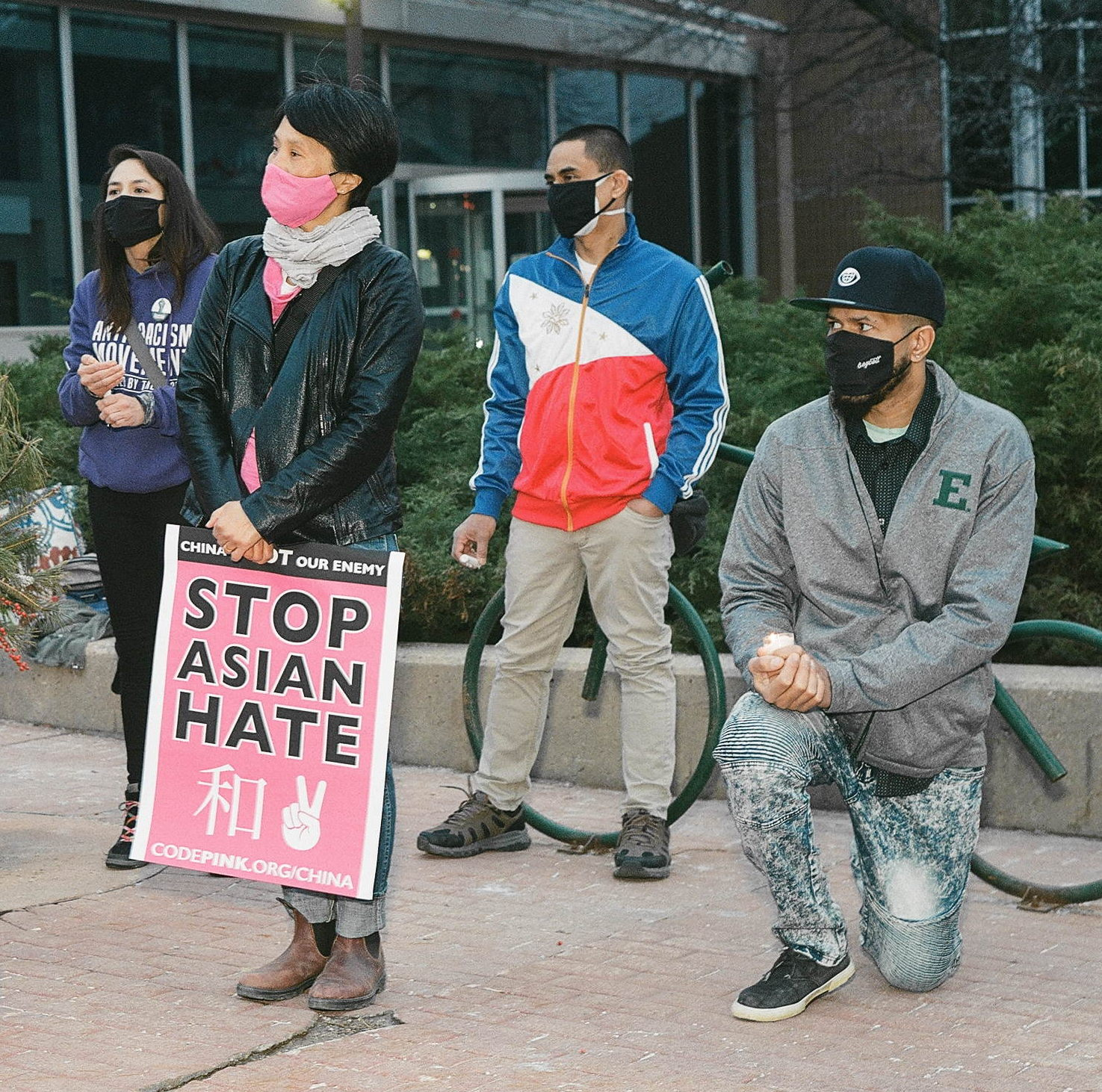 Activists and coalition members stressed through speeches they delivered that the increasing incidence of anti-Asian violence in the U.S. stems not only from the Sinophobic scapegoating of China by U.S. officials, but also from the ongoing legacy of U.S. imperial conquests in Asia.

"What is the justification on the part of the West for Asian hate?" Party for Socialism and Liberation member Alan Kim, asked, in conversation with The Houston Chronicle at a rally in Houston on Saturday. "Of course, it is a conception of us as the Yellow Peril…the Communist threat," Kim said. "If our massacre can be justified by the U.S. as the fight against whatever, I say: 'Do not play their game.'"

U.S. State Department attempts to dehumanize a group of people in order to justify a U.S. military intervention are certainly not novel: we have seen the same methods used to manufacture consent for the war in Iraq, and we have seen the same targeted violence against marginalized communities in the form of Islamophobia. Racism and imperialism are inseparable from each other and, in fact, reinforce each other.

Reporter Asia Tabb of CBS News affiliate WHP-TV tweeted videos of one rally in Lancaster, Pennsylvania, in which demonstrators can be heard chanting: "When they say more war, we say no more," and "the people, united, will never be defeated."

Sheila Xiao, co-founder of Pivot to Peace and ANSWER coalition member, reflected back on the events of the 27th, stating, "The national day of action against racist anti-Asian violence and China-bashing mobilized thousands of people across the country. It was clear as day that people of all diverse backgrounds, and of all generations stood in solidarity with the Asian American & Pacific Islander community." Xiao said demonstrators "understood the age-old divide and conquer tactics used by the government to keep us fighting each other rather than the system that perpetuates that violence. But most importantly, people rejected the war propaganda designed to create an enemy of China, which is the root cause of the uptick in violence against Asians."

The overwhelming consensus throughout the rallies on Saturday was one of deep concern over the life-threatening domestic and international consequences of the U.S.’s anti-China rhetoric and Cold War aggression. Asian American organizers were clear that in order to stop anti-Asian violence at home and abroad, the U.S. needs to first abandon its military presence in the Pacific and accept that China Is Not Our Enemy. Highlights from select cities below. 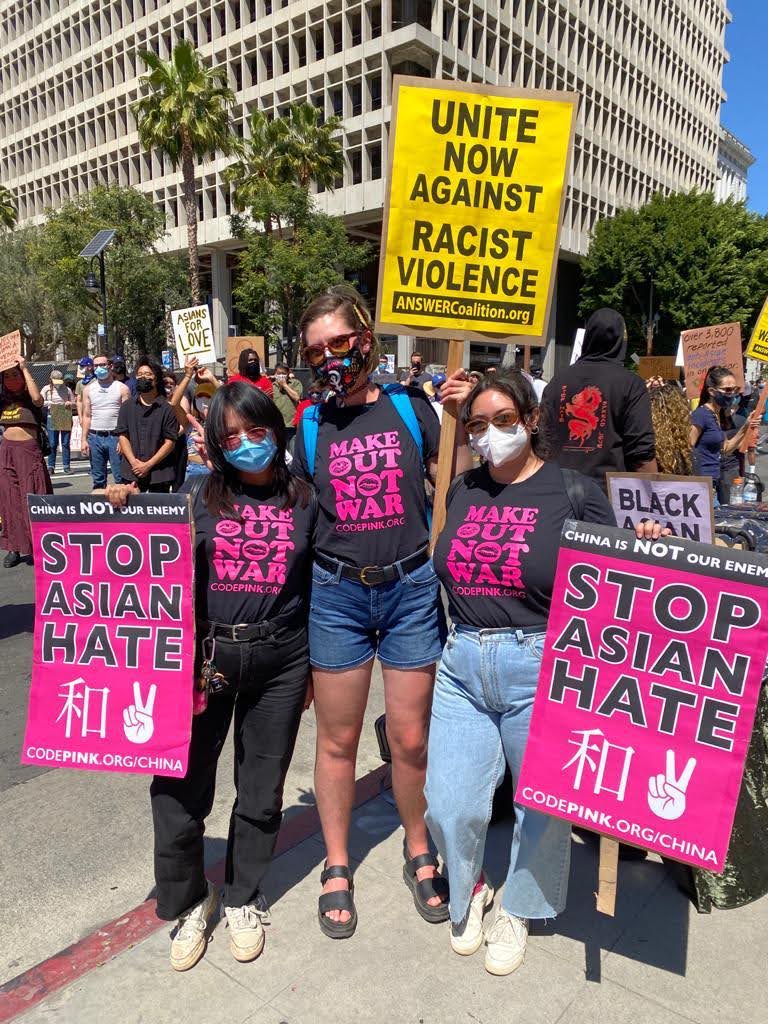 Over 1,000 protesters gathered at Los Angeles City Hall and marched from City Hall to the Chinese American Museum, with a stop at the Japanese American National Museum. CODEPINK’s own Maxine Garcia spoke in condemnation of Secretary of State Blinken and the Biden administration’s scapegoating of China as justification for an increase in military force against China. Sheila Xiao delivered an address, referencing the dangers of the fetishization of Asian women by white supremacists and honoring the Asian migrants who died building U.S. railroads.

Aside from downtown Los Angeles, hundreds of demonstrators also rallied at the intersections of Santa Monica and La Cienega Boulevards in West Hollywood, where cars passing by honked and chanted along in support.

Hundreds rallied beneath the Friendship Archway in Chinatown, including activists from ANSWER, the PSL, Anakbayan DC, Butterfly for Peace, and student groups representing Black and Asian and Pacific Islander students at the University of the District of Columbia Law School. Butterfly for Peace’s Hyunsook Cho connected the murders in Atlanta with U.S. imperialism and the sexual exploitation of Asian women by U.S. troops at their hundreds of military bases in the Pacific. 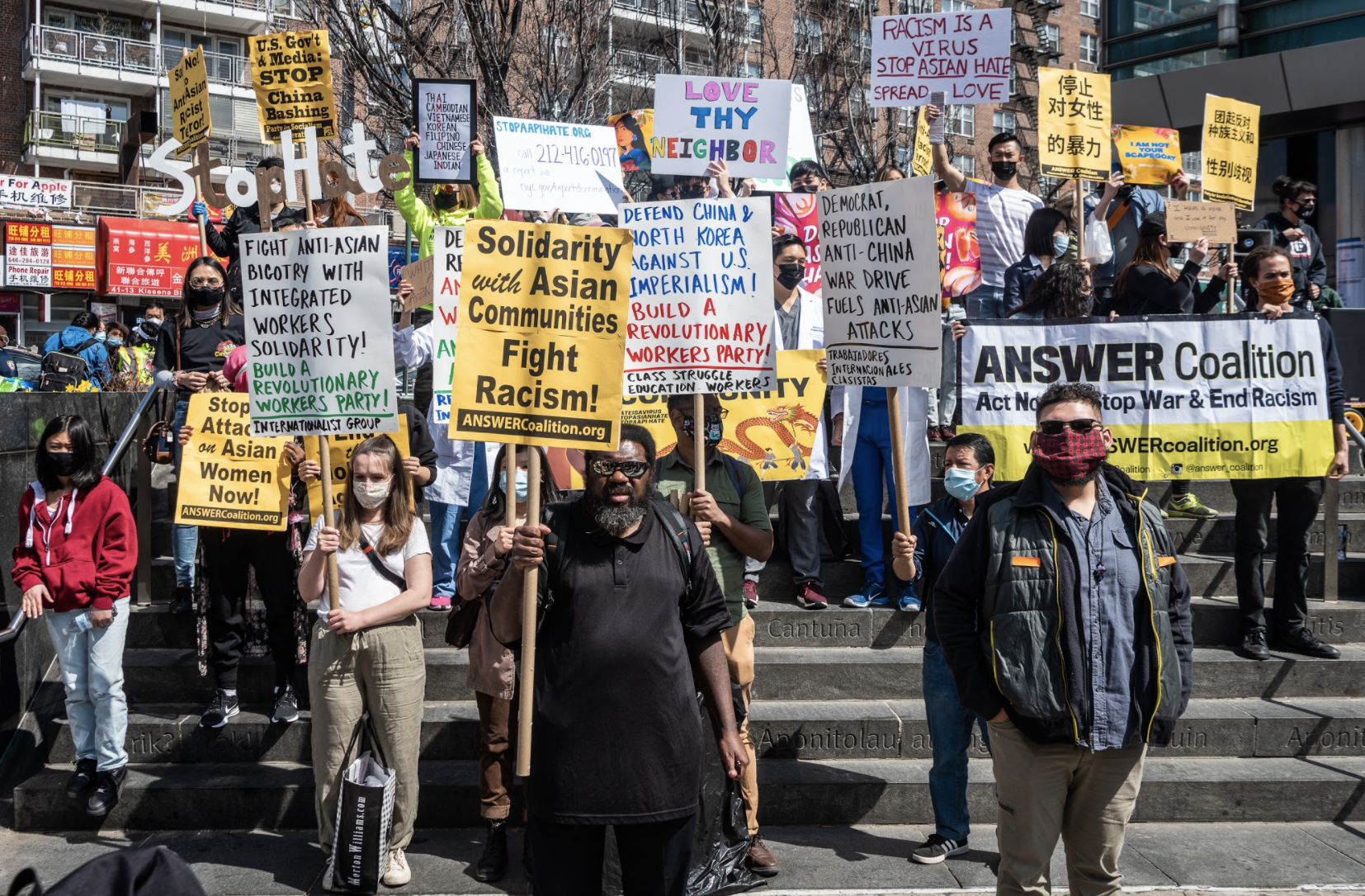 Demonstrators with signs in front of the Queens Public Library in New York. (Photo by Gabriele Holtermann)

In Flushing, activists and family members marched and uplifted the story of Christian Hall, a 19-year-old adoptee from China who was shot seven times and killed by Pennsylvania State Troopers on Dec. 30, 2020 while enduring a mental health crisis. Hall’s cousin, Nicole Henriquez-Otero, delivered an address as his parents and other family members stood in support.

Over 1,000 demonstrators marched in central Auckland, NZ, as well. (Video by Daryl Wong)

One year into the pandemic, the ongoing opportunistic scapegoating and demonization of China by the U.S. government has driven and reinvigorated a widespread sentiment of Sinophobia in the country. Witnessing this increase in U.S.-led anti-China rhetoric and its atrocious effects on Asians & Pacific Islanders in the U.S. and abroad, CODEPINK started its China Is Not Our Enemy campaign a year ago. Since then, the China Is Not Our Enemy campaign has been working steadily to challenge the U.S. propaganda around China and to advocate for U.S. cooperation and diplomacy, not competition and conflict, in its relations with China. The tide is turning, as last Saturday’s National Day of Action turnout demonstrated, and more and more Americans are expressing their outrage at the short and long term consequences of the U.S.’s latest attempts to stoke a global conflict with China.

Madison Tang is the China Is Not Our Enemy campaign coordinator at CODEPINK, a women-led grassroots organization dedicated to ending U.S. wars and militarism. Click here to sign CODEPINK’s petition to Secretary Blinken asking him to stop anti-Asian hate abroad and at home by ceasing U.S. aggression toward China.