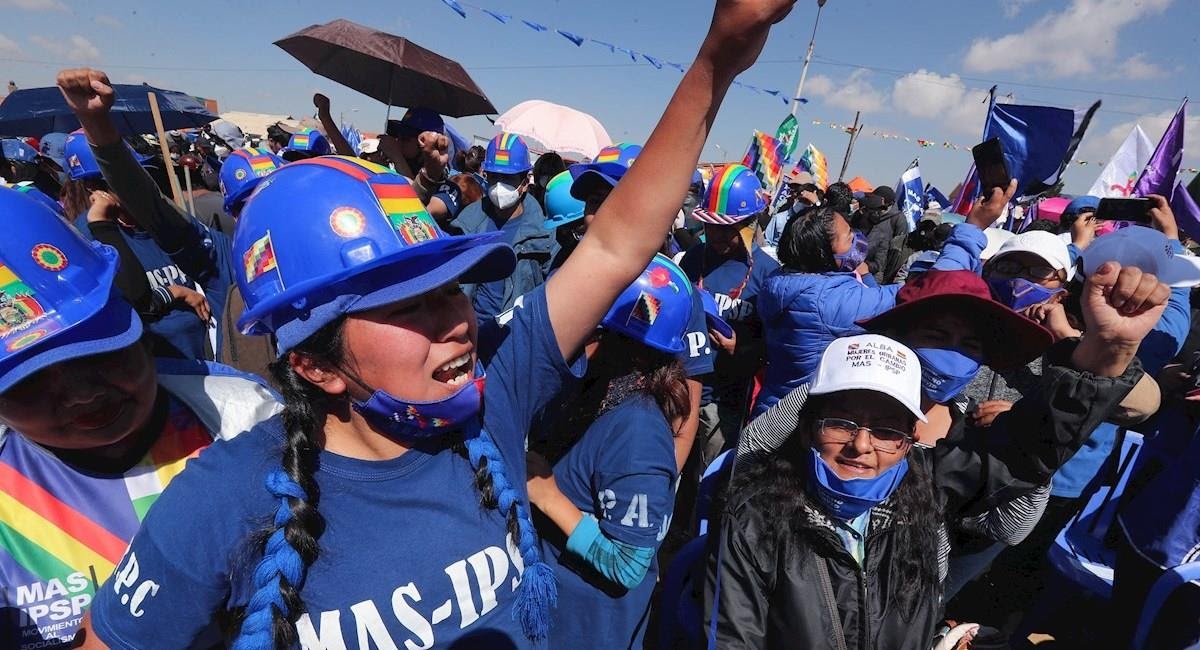 Tens of thousands of people took to the streets in Bolivia on November 8 to celebrate the inauguration of President Luis Arce. They would celebrate again the next day, as former president Evo Morales re-entered the country almost a year to the day after his government was overthrown in a coup backed by the Organization of American States (OAS). Almost a month ago, on October 18, the Bolivian people delivered a resounding 26-point electoral victory to the Movement Towards Socialism (MAS) party. They voted against the neoliberalism represented by candidate and former president Carlos Mesa and his Comunidad Ciudadana (Citizen’s Community), as well as against the fascism and white nationalism of candidate Luis Fernando Camacho and his Creemos (We Believe) party.

The most important victory, however, did not come at the ballot box, but rather on the streets. After the coup regime of Jeanine Añez had postponed elections multiple times in 2020, hundreds of thousands of Bolivians protested last summer to demand a fixed election date. Even after authorities set a date, protests continued, calling for justice for those murdered by the regime, insisting that those who had been jailed be freed, and denouncing the regime’s corruption and malfeasance. Had it not been for that massive display of people’s power against a coup government known for “summary executions and widespread repression”, Bolivians may have not even had the opportunity to vote.

América Maceda of the Bolivian collective Abya Yala Communitarian Feminism, interviewed by CODEPINK's electoral observation delegation, explained why people were willing to risk everything: “Although on the one hand there was terror and fear, on the other there was hope and struggle, fundamentally by social organizations, to recover democracy and deepen the Bolivian process of change.”

This process of change can be traced to 1998, when Evo Morales and others founded the IPSP (Political Instrument for the Sovereignty of the Peoples) in an attempt to have a political party work in conjunction with social movements and labor unions. Banned from competing in elections, in 1998 the IPSP merged with the MAS, then a fringe party with virtual zero membership. By 2005, Morales was elected to the presidency under the MAS-IPSP banner, which began the country’s transformation and remains the official name of the party.

The call for creating a political instrument came in the late 1980’s from a conference that included five of the country’s biggest unions and social movements. Bolivian sociologist Juan Carlos Pinto explained that “the idea from the start was that a party is division, a party isolates some and separates others, it creates bosses and owners. The people are the revolutionary axis, and we needed [the IPSP] to enable us to fight for the revolution.”

Both Pinto and social leader Maceda noted an imbalance between the party and the social movements that comprise it in the years prior to the coup. As the party grew stronger following repeated electoral victories, social movements became bureaucratized and the IPSP became an afterthought. Despite the continued presence of “capitalism, patriarchy and colonialism… one couldn’t protest against a brother president [Morales],” Maceda mentioned in explaining the challenges for social organizations of having an ally in office.

This bureaucratization and demobilization would prove costly in the wake of the October 2019 election in which Evo Morales was elected but the OAS declared the election fraudulent. People were anxious to get out onto the streets to defend their democracy from the coming coup, but were prevented from doing so by state and party officials who urged restraint. “These errors were paid for by the Bolivian people,” she said.

There is some resentment towards the MAS leadership, Evo Morales included, for the fact that he and others fled or hid in embassies, while average citizens were gunned down by the coup regime. There is also the idea that the coup may not have happened had Morales chosen not to run for a controversial third term.

Yet Morales remains broadly popular and has a “mystique”; even those within the movement who are his harshest critics speak of him with a certain reverence. As the nation’s first indigenous leader after 500 years of colonial, then white settler rule, Morales will continue to have significant influence within the country, yet he has rejected the possibility of joining the government in any official capacity. He is still the president of the Six Federations of the Trópico, a grouping of agrarian unions in the department of Cochabamba and “the most important social movement in Bolivia,” according to journalist Ollie Vargas.

There is speculation that Morales might become the next president of UNASUR (Union of Southern American Nations), the multilateral organization that saved Bolivia from a possible coup in 2008. Following a failed recall referendum to remove then President Morales from office, there was an attempt to destabilize and delegitimize the Morales government as right-wing groups took over government buildings. UNASUR called an extraordinary meeting, declared its support for the Bolivian government, and subsequently investigated and condemned a massacre committed by right-wing civic groups. In the years prior to the 2019 coup, there was a concerted effort by the U.S. and its allies to weaken the institution, as Chile, Brazil and Colombia withdrew from its constitutive treaty. President Arce has already committed to rebuilding UNASUR and someone with the stature of Morales would grant it significant influence.

Among the grassroots, however, there is hope that he will dedicate himself to political education. Speaking about the important progress made by Bolivia under Morales, including a 42% drop in poverty and a 60% reduction in extreme poverty, Maceda noted that “material conditions for the people improved, [yet] this was not accompanied by a process of political education, consciousness and self-criticism.”

Despite the criticisms, the overwhelming MAS-IPSP victory is a sign that social movements will not abandon the party. Furthermore, the results of this year’s election are the final nail in the coffin for claims of fraud in the October 2019 vote, particularly since comparisons by CEPR (Center for Economic Policy Research) and CELAG (Latin American Strategic Center for Geopolitics) of last year’s tally sheets to this year’s in precincts with alleged “irregularities” show the MAS-IPSP getting equal or greater support. Morales won cleanly last year; arguments to the contrary are baseless and should finally be put to rest.

The immediate future for Bolivia is complex; the new government will be saddled with the coup regime’s mishandling of the economy (including taking on a $300 million loan from the IMF that was unauthorized by the Senate), and the economic downturn from the pandemic. There is also a question about accountability: although President Arce has promised not to seek vengeance for the regime’s crimes, he will not be able to ignore the clamor for justice.

This accountability should extend beyond the key members of the coup regime and include one of the key players in the 2019 coup: OAS Secretary-General Luis Almagro. Almagro has ignored questions about the OAS response to the 2019 elections made by four U.S. representatives. Immediately after the 2020 elections confirmed a MAS victory, President Arce, Morales and others in Bolivia called on Almagro to resign. They have been joined in this by the Puebla Group, an organization that includes some of the region’s most prestigious politicians, including former presidents Dilma Rousseff (Brazil), Ernesto Samper (Colombia), Rafael Correa (Ecuador) and Fernando Lugo (Paraguay). Additionally, Bolivian social movements and others throughout the hemisphere are demanding Almagro resign, including CODEPINK.

As Morales said, Almagro “should resign. His hands are stained with blood. He has no moral authority. If he does not [resign], I ask that OAS member states carry out his removal for causing irreparable damage to the Bolivian people.”

Leonardo Flores is a political analyst and Latin America Campaign Coordinator with CODEPINK. He was in Bolivia for the elections as part of an observation delegation.