A Tax Day Peace Offering to the Tea Party 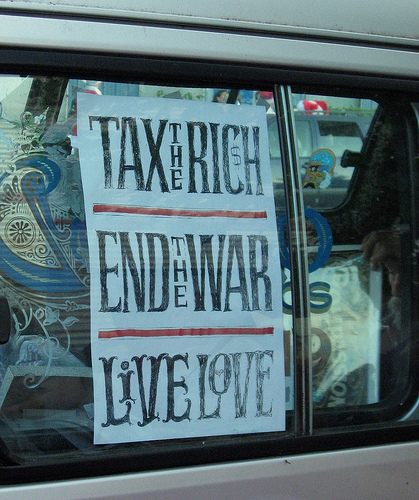 On Tax Day, Tea Party members from around the country will descend on the nation's capitol to "protest big government and support lower taxes, less government and more freedom. CODEPINK, a women-led peace movement advocating an end to war and militarism, will be sending some representatives. While we come from the opposite end of the political spectrum and don't support the goals and tactics of the Tea Party, there is an area where we are seeking common ground: endless wars and militarism.

As Tea Partiers express their anger at out-of-control government spending and soaring deficits, we will ask them to take a hard look at what is, by far, the biggest sinkhole of our tax dollars: Pentagon spending. With the Obama administration proposing the largest military budget ever, topping $700 billion not including war supplementals, we are now spending almost as much on the military as the rest of the world combined.

Perhaps the Tea Party and peace folks--unlikely allies--can agree that one way to shrink big government is to rein in military spending. Here are some questions to get the conversation going:


We are not naïve to think that it would be easy for the Tea Party and the peace movement to work together. Our core values are different. We have had our battles in the past. We would certainly part ways in terms of how to redirect Pentagon funds, with progressives wanting more government investment in healthcare, jobs, clean energy and education--which is exactly what the Tea Party opposes.

But building peace means reaching out to the other side and trying to find common ground even with those people whose beliefs contradict so many of our own.  If the Tea Party is really against runaway government spending, then certainly we can work together to cut a slice out of the military pork that is bankrupting our nation. In extending the olive branch to talk about war, the conversation can hopefully be enlightening on other issues as well, such as banks run amok and undue corporate control of our government.

Don't relax on tax day. Your country needs you to start this conversation now.

Who knows what kind of potent brew could emerge when folks on the left and the right--both alienated by a two-party system that doesn't meet our needs--sit down for tea?