A Doubtful Proposition: A reflection on the trial of the Kings Bay Plowshares 7 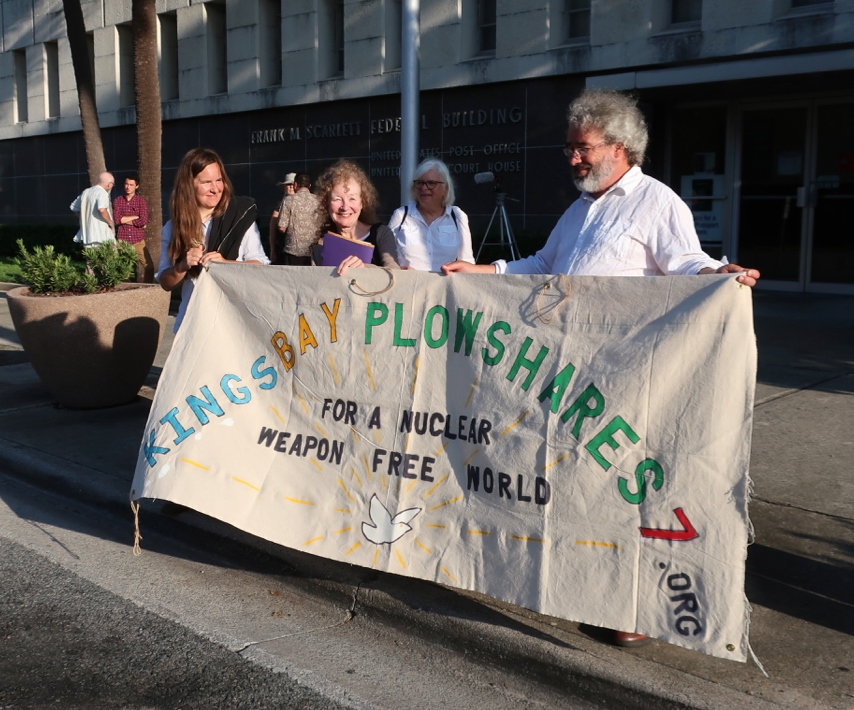 “Whether nuclear weapons are actually illegal under international or domestic law (a doubtful proposition) is not relevant or an appropriate issue to litigate in this case,” so ruled Judge Lisa Godbey Wood of the US District Court for the Southern District of Georgia, late on Friday October 18. This last-minute order, restricting the defense of seven antinuclear activists at a trial that began Monday morning the 21st, made a short trial a foregone conclusion. It also, more than any evidence that the yet to be impaneled jury would eventually hear, made their convictions all but certain.

On trial were seven Catholics, who on April 4, 2018 -the 50th anniversary of Martin Luther King’s assassination- cut through a fence and entered the Kings Bay Naval Submarine Base in Georgia, homeport for six Trident nuclear submarines, where in an act of symbolic disarmament, they poured bottles of their own blood onto military plaques and hammered statues of nuclear missiles. In a previous August 26 ruling on the activists claim that their actions were protected under the Restoration of Religious Freedom Act (RFRA) Judge Wood agreed that the “Defendants' actions at Kings Bay were exercises of their sincerely held religious beliefs that they should take action in opposition to the presence of nuclear weapons at Kings Bay,” and that their actions were “‘religious exercises’ within the meaning of RFRA.”

“The laws at issue put ‘significant pressure’ on Defendants to not exercise their religion as they did at Kings Bay” Judge Wood continued. She also noted they “were substantially burdened by the laws at issue.” Judge Wood nevertheless decided that the government has a “compelling interest” to have nuclear weapons which overshadows any other consideration.

At trial, activists were allowed to explain to the jury “their subjective beliefs about religion and the immorality and illegality of nuclear weapons,” but, she warned, too much “testimony and argument on these topics creates the danger of unfair prejudice, confusing the issues, misleading the jury, undue delay, wasting time, or needlessly presenting cumulative evidence.” In effect, the defendants were allowed to give evidence of their own subjective beliefs that nuclear weapons are illegal but not allowed to explain the facts that inform those beliefs.

One of the expert witnesses that Judge Wood decided would confuse and mislead the jury was Professor Francis Boyle of the University of Illinois who had submitted an extensive legal declaration in defense of the activists, noting that US treaties, including the Geneva Conventions banning weapons of mass destruction and the condemnation of nuclear weapons by the International Court of Justice among many others, are part of international law to which the US government and its citizens are bound to obey.

Also disqualified as a witness was Professor Jeannine Hill Fletcher, a theologian from Fordham University. She was not allowed to testify that the activists’ actions were based on sincerely held religious beliefs in the context of their Catholic faith. The jury was allowed to hear only about the defendants’ subjective beliefs about their Church’s teachings on war and nuclear weapons, but what those teachings actually are or whether the defendants’ subjective beliefs are well informed, was deemed irrelevant.

At trial, the jurors had no knowledge of Judge Wood’s order but they were clearly confused by its bearing on the testimony they heard, as shown by the notes that they passed to the judge for clarification. “Is it true that there are nuclear missiles kept at Kings Bay?” one juror wanted to know, a question that went unanswered as irrelevant.

The fact that the defendants left this and other decisive questions up in the air and unanswered could easily have given the impression to the jury that they simply did not know what they were talking about, that they were not acting on known facts about Kings Bay and the danger of nuclear weapons, but on rumor, conjecture or propaganda by our country’s enemies, if not paranoid delusion. Defendant Carmen Trotta could tell the jury, “One-fourth of the US nuclear arsenal is deployed out of Kings Bay, the single most sophisticated weapon on our planet. If used, they will destroy all life on the planet. They can’t be legal,” but he was not allowed to say why he believed this to be true.

Martha Hennessy was able to speak of the Catholic social teaching she learned from her grandmother, Dorothy Day, and her belief that “We, our country, many countries, replace God with these weapons. We don’t put our trust in God. We need to study Christian teachings; it is idolatry to trust these weapons,” but the jury was not allowed the context to discern whether her belief, however “sincerely held,” proceeded from established and systematic teachings of her Church, or her own personal and possibly misguided conviction.

The government prosecutors took advantage of the gag order that limited the defendants’ testimony. At times they seemed to goad them up to the line of what was allowed, only to have something to object to. One prosecutor badgered Clare Grady in an attempt to make her look arrogant, suggesting that she set herself above the law, claiming the right to run red lights if she felt like it, arrogating herself “the power to overrule 320,000,000 who have elected Congress to make laws.” “You think that your personal opinion is the supreme law of the land!” he challenged her. While the prosecutor spoke freely about the supreme law of the land, Clare and other witnesses for the defense could not. Had he been allowed to testify, Professor Boyle could have explained to the jury that the term “supreme law of the land” is not an abstract or malleable notion and that the supreme law of the land that Clare was acting in obedience to was not her own personal whim of the moment, but is something clearly defined in article VI of the US Constitution, “all Treaties made, or which shall be made, under the Authority of the United States, shall be the supreme Law of the Land; and the Judges in every State shall be bound thereby, any Thing in the Constitution or Laws of any State to the Contrary notwithstanding.”

In less than 90 minutes, the jury convicted all seven on four felony counts each. They are facing up to 25 years in prison.

Judge Wood’s determination regarding irrelevant testimony is concerning enough, but her parenthetical judgement that the illegality of nuclear weapons is “a doubtful proposition,” shows an irrational and dangerous bias that, by itself, should have disqualified her from hearing this case, at least. The illegality of making, maintaining and threatening to use nuclear weapons is firmly and unequivocally established as the “supreme Law of the Land; and the Judges in every State shall be bound thereby, any Thing in the Constitution or Laws of any State to the Contrary notwithstanding.”

Three months before I was in the courtroom in Brunswick, Georgia, where this miscarriage of justice occurred, I was in Europe, camping outside (and occasionally making an unauthorized visit inside) a German Air Force Base at Buechel. There, 20 B61 nuclear bombs are maintained by a US Air Force squadron, ready to be loaded on German fighter bombers upon orders from both the US and German governments.

The US maintains that the prohibitions of the NPT and the other disarmament treaties and agreements only count in peace time. The logic is that, if there is a nuclear war, the NPT by that point will have failed to keep the peace and so is null and void. In the meantime, the nuclear weapons stored at Buechel and on bases in five other NATO countries are in the possession of the US.

It seems absurd on its face- disarmament agreements in force only in peace time is like being a vegetarian between meals. On the other hand, it is true that if (when?) the order is given to load these US nuclear bombs onto German planes to be dropped on predetermined targets, by that time any notion of law, of agreements and cooperation between nations, of human kindness and simple decency, is done and over. No one will be protected and no one held responsible for the chaos and destruction to follow. There will be no Nuremburg trials after World War III.

Clare Grady testified in court in Georgia that “we used the word ‘omnicide,’” describing a banner she helped hang at Kings Bay. Omnicide, she explained, is “a word that didn’t exist before the nuclear age—the death of all living things. We put up crime scene tape because Trident is the biggest crime we know.” Judge Wood’s doubt over the illegality of nuclear weapons, her suggestion that the means of the destruction of all living things is legal and to be protected, shows, at best, a culpable ignorance of the law, if not outright contempt for it. If, on the other hand she is right and the killing of everything is legal and actions to avert omnicide are criminal, is the institution of law any good at all? If Judge Wood is correct and objection to the destruction of the whole of creation and the killing of everyone is the irrelevant and subjective belief of some Christians, and not a constitutive and essential obligation of our faith, than of what use is Christianity?

These are among the crucial, but hopefully not the final, questions that Lisa Godbey Wood raised for us in the courtroom in Brunswick. I pray that she, and all of us, attend to them with the diligence and courage shown by the Kings Bay Plowshares 7 on April 4, 2018.

Brian Terrell, [email protected], is a co-coordinator of Voices for Creative Nonviolence