"YOU CAN'T BOMB THE WORLD TO PEACE!" 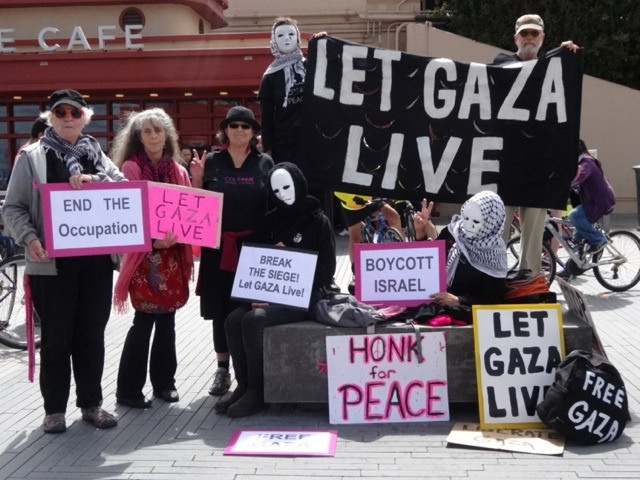 Last month we brought our peace messages to the Golden Gate Bridge at the height of the Israeli assault on GAZA.  We were greeted and thanked by numerous foreigners on the bridge from countries all across the globe.  Early on in the walk a young Turkish woman with head scarf, approached me in tears and thanked us for our effort.  Later in the march, numerous women with head coverings from multiple muslim nations showed expressions of solidarity, appreciation and support, as did many others.  We converged in the middle of the bridge, as usual, for a silent vigil, and finished our group march with a rally on the SF side, commemorating the victims by reading dozens of the names and ages of the 2,000 + killed in GAZA.  As Fred and I returned to the Marin side, I held a sign that said:"LET IRAQ LIVE"  (alternating with the LET GAZA LIVE side)......a young 13 yr. old boy passed me,  walking alone, while clapping his hands in support.  I turned and asked him where he was from.  "Kurdistan," he said.  I asked him where in Kurdistan. "Iraq," he replied.

The Golden Gate Bridge is one of the best places to "Propagate Peace."  Hundreds of visitors from all around the world come to the bridge.  Help us break the silence and show them that "the people" say NO WAR!  During this somber week, as the US government continues to expand its bombing and drone campaign on the world, more lives continue to be threatened.  Syria, Iraq, Somalia, Afghanistan, Pakistan, Yemen.  Please join us tomorrow as we continue to break the silence.