Pave Paradise, Put Up a Naval Base: South Korean Activists’ Extraordinary Struggle to Save Jeju Island 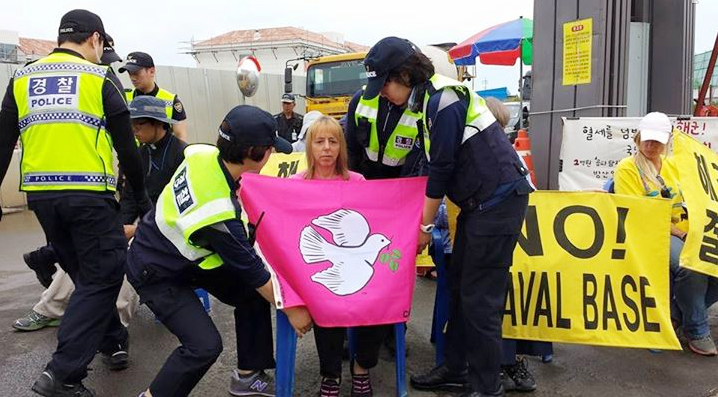 South Korea’s Jeju Island is a popular tourist destination full of spas, resorts, golf courses, sandy beaches, waterfalls and hiking trails.  But if you really want to get rejuvenated, skip the tourist hotspots and go directly to the village of Gangjeong to support the extraordinary community that has been opposing the building of a naval base since 2007. You’ll get your morning exercise at 7am bowing 100 times facing the base, praying for an end to its construction. You’ll get spiritual nourishment from the noon mass outside the base (no religion necessary). And if you really want to feel like royalty, join the activists in their daily ritual of sitting in plastic chairs blocking the base entrance, then having the police gently lift you up in your chair and cart you away so the cement trucks and traffic can flow in and out of the base. When the traffic ebbs you grab your chair and scurry back in place—starting the ritual all over again. Want aerobic exercise? Join in the jubilant dancing and drumming that liven up the protests. Want good food? The village cooks at the communal kitchen make fantastic, healthy meals with heaps of fresh vegetables and homemade kimchi.

After a long journey to cross the DMZ from North to South Korea with a group of 30 peace women, some of us—including Nobel Prize winner Mairead Maguire and retired Colonel Ann Wright—stopped on Jeju Island and fell in love with this community of farmers, fisherpeople, city officials, small shop owners, florists, artists, poets, students and grandmothers. Over the years they have attracted peace activists from the mainland and internationals, including members of the Catholic Workers, Veterans for Peace, Amnesty International, and prominent figures like Gloria Steinem, Oliver Stone and Korean-American activist Christine Ahn.

The struggle dates back to 2007, when the South Korean government began construction of a $970 million naval base in Gangjeong, a village of less than 2,000 people on the southern tip of Jeju island. The government had tried to build the base in two other villages but was thwarted by widespread protests—especially by the haenyeos, the island’s women divers renowned for spending hours in the chilly waters harvesting conches, abalones, and other marine wildlife, as well as for their history of fierce resistance to Japanese occupation.

So the Korean government secretly cut a deal with the Gangjeong mayor at that time, who, to secure village “consent,” set up a little-publicized meeting that only 87 residents attended.

When the rest of the villagers discovered what happened, they began to protest. Thousands have participated in sit-ins and blockades. The more radical folks chained themselves to heavy machinery to halt construction or surrounded the base with kayaks. About 700 people have been arrested and charged with hefty fines that amount to over $400,000, fines that they cannot or will not pay. Many have spent days or weeks or months in jail, including a well-known film critic Yoon Mo Yong who spent 550 days in prison after committing multiple acts of civil disobedience. “The only thing that kept me from utter despair during my long imprisonment and hunger strikes,” he told us, “was the global outpouring of support I received.”

While the number of villagers involved has decreased over time, with people exhausted or resigned or won over by government promises of economic gain, there is still an extraordinary resistance community bursting with positive energy. Three generations work together, sharing their wisdom and the unique contributions. Their activities are infused with ritual, art, dance, music—and lots of joy and laughter. Artists create magnificent exhibits, murals, banners, puppets and sculptures. Poets, writers and filmmakers produce works that have drawn worldwide attention to the struggle. Mainland writers have been so inspired that they raised funds to build an elegant library, brimming with donated books, where local children whose parents are divided on the issue (pro- and anti-base) can study and play together.

The group has a deep spiritual component that comes from Catholics (including priests like lifelong activist Father Moon, Benedictine sisters and visiting US Catholic Workers), Buddhists and goddess worshipers, but secular people are embraced.

Despite the dedication, creativity, persistence and sacrifice of the activists, they have not succeeded in stopping the base. It is scheduled to be completed by the end of 2015 but will probably take another year due, in part, to the protests. The immense complex is designed to accommodate 20 warships, nuclear-armed submarines, and two 150,000-ton vessels. While the government—to sweeten the pot—says the base will also have civilian uses, like the docking of cruise ships, the primary purpose is military.

The South Korean government denies that the US will have access to the base, but under the terms of its Status of Forces agreement, Washington can deploy its military forces at any South Korean military facility. Activists say the base is designed to accommodate Aegis destroyers that will likely become part of an integrated missile defense system under US command.  They think the US directed South Korea to build the base to intimidate both North Korea and China, and to protect US economic interests. “This increased militarization is not making the region more secure, as the South Korean government claims,” said activist Jungjoo Park as she gave us a tour of the island, “but more tense, unstable and unsafe.”

Villagers also fear the rape, prostitution, and drugs associated with naval bases and their operating personnel, and decry the waste of $1 billion that could have been put to useful purposes.

They also see the base as a violation of their pristine environment, which is a UNESCO World Heritage site. Farmers and fisherpeople worry that the pollution generated by the base will destroy their livelihoods. Gangjeong’s coral reefs and estuaries, home to many endangered species, have already been destroyed. Particularly painful to the activists is the destruction of the Gureombi rockbed, which was a stretch of unique topography that was home to a diversity of life forms. In 2012 it was blasted to pieces and replaced by a massive concrete floor. “This was a sacred site, a dwelling place of the gods, a place where people gathered to picnic, swim, play and pray,” said Tera Kim, who spent nine months living on the rockbed trying to save it. Every year the villagers hold Gureombi Remembrance Day to mark the anniversary of its destruction.

As our group of visitors stood by the base looking out at the ocean, we saw the women divers in the distance, divers who over decades have been swimming alongside schools of dolphins and maintaining a harmonious relationship with the ocean and coral reefs. The concrete hulks of the base facilities, the ugly walls topped with concertina wire, are a desecration of the island’s stunning beauty and moved us to tears.

“Some say we are fighting a losing battle,” said Father Moon, a Catholic priest with a flowing white beard. “But for the sake of our ancestors and future generations, we must resist. This place should be a sanctuary for peace, not the site of a future military confrontation.”

“Maybe mother nature herself will help us,” Yong-beom Choi, vice mayor of the village, told us half-jokingly “Jeju is famous for huge typhoons. Maybe mother nature will unleash a very localized typhoon that will wipe away this monstrosity and allow us to live in peace.”

But the activists themselves are a powerful force of nature. Rather than waiting for a typhoon, you can support their efforts by going there or sending a donation to this heroic community of peacemakers.

Medea Benjamin is the co-founder of the peace group CODEPINK and the human right organization Global Exchange. Follow her on twitter at @MedeaBenjamin.