#OWS: Hats Off To The Agents Of Disruption

#OWS: Hats Off To The Agents Of Disruption
By Nancy Mancias

There's a wave of political disruptions taking the 1% by storm causing known figures such as Dick Cheney, Condoleezza Rice and former Goldman Sachs CEO Henry Paulson to take refuge and causing others like Karl Rove to simply "lose his mind". The 99% has moved its persistency against social and economic inequality and greed from outside the urban camps to inside convention rooms and university auditoriums, flexing their new voices for real change.

Former and current politicians along with CEOs travel across the country with some earning six-figures in cash to speak to large groups representing the 1%. Wisconsin Governor Scott Walker was at one such event, speaking to members at the exclusive Union League Club of Chicago. Walker is well-known for his union busting tactics of eliminating collective bargaining rights for public employees in Wisconsin, which sparked a workers uprising where citizens occupied the State Capitol earlier this year. Walker's visit to Chicago did not go unnoticed by the teacher's union and community groups. Inside the event, the human microphone "mic check", used in the Occupy movement, boisterously stated, "Governor Walker has vilified unions and insulted the 99%...."

While politicians are on the campaign trail selling books or raising funds from the 99% to be the next big honcho, the Occupy movement has too been hot on the trail. The Washington Post newspaper reports members of Occupy Minnesota purchased books at a Michele Bachmann book signing on Black Friday to have the opportunity to speak with her directly at the Mall of America. Bachmann just as Governor Walker was "mic check'd" at a previous event. President Barack Obama hasn't gone unscathed by the disruptions. At a high school in Manchester, New Hampshire, the Occupy movement brilliantly "mic check'd" Obama highlighting the issue of the over 4000 peaceful protesters who have been arrested across the country and even handing him a note. 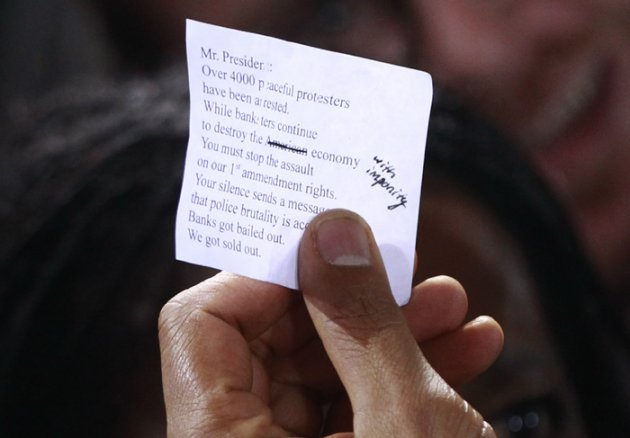 Although Bachmann and Barack handled the disruptions to the best of their abilities, Karl Rove took a different approach and engaged the audience in a shouting match, belittling the efforts of the movement. Occupy Baltimore staged a "mic check" at John Hopkins University where Rove was to address an audience, calling on his history as the architect of the Iraq war.

CODEPINK is no stranger to disrupting key events, spending time in jail and shaking the pillars of power when addressing war criminals and members of Congress at public hearings on the Hill. After years of disruptions, it's refreshing to have a movement take on the reins of a tactic that requires nerves of steel to address those who should not be feted in a country with high unemployment, high foreclosures, expensive health insurance, expensive tuition and skyrocketing homeless communities.

So, hats off to the agents of disruption! We love the 99%!