'Courage in women is often mistaken for insanity.' 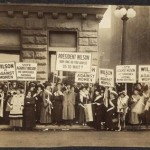 A wonderful e-mail has been circulating today. It describes how Alice Paul, Lucy Burns and other women of the 1900s -- two generations after Susan B. Anthony and Elizabeth Cady Stanton -- were beaten, jailed, trashed in the newspapers and taunted by crowds when they snuck into private venues, stood in lines illegally, chained themselves to the White House, and more, all to get the right to vote. Now praised, then they were considered crazy, obnoxious, rude, loud, and weird. Why couldn't they just be quiet? Why couldn't they just politely voice their opinion through the (unjust, sexist) system? Hmm. Funny, CODEPINK women hear the exact same questions today!

Nearly each day, someone informs a CODEPINK member to her face, in an e-mail or by comment (cough cough), that our attempts to stop the war, to stop all future wars, to demand our great nation invest in diplomacy, health care, education and infrastructure rather than destruction are crazy. We are rude, we are weird, we are obnoxious. Sometimes -- most times -- these tauntings are laced with misogynstic, ageist and homophobic epithets -- "old hags" "lesbians" (as if that's a bad thing), "prudes" etc. And in places like the Democratic and Republican conventions, where free speech and dissent should be protected, we are locked out from public events, taunted by onlookers, pushed back by police and, sometimes, arrested.

It happened to our foremothers, the suffragettes, too. From this incredibly powerful e-mail:

"Remember, it was not until 1920 that women were granted the right to go to the polls and vote.

The women were innocent and defenseless, but they were jailed nonetheless for picketing the White House, carrying signs asking for the vote...

It is jarring to watch Woodrow Wilson and his cronies try to persuade a psychiatrist to declare Alice Paul insane so that she could be permanently institutionalized. And it is inspiring to watch the doctor refuse. Alice Paul was strong, he said, and brave. That didn't make her crazy.

The doctor admonished the men: 'Courage in women is often mistaken for insanity.'" (Read the rest, and see brilliant photos, here).

Peace work and activism is not easy. We face incredible systems of power, and all of those people benefitting from them, and everytime we threaten them, we face the tauntings. The arrests. The abuse. But Alice Paul and other women prevailed after nealy 100 years of work. Can we stand another 100 years of war?