As widows of 9/11, both women received a great deal of financial and emotional support from their friends, families, and many others and were well taken care of during their pregnancies and afterward. Susan and Patti, both residents of Boston-area suburbs, met several months after 9/11 and bonded over the loss of their husbands. They became friends and when Susan felt the need to start an organization to help the Afghan widows whom she had come to feel a strong connection with and concern for, she turned to Patti for help. In 2003, they founded Beyond the 11th. 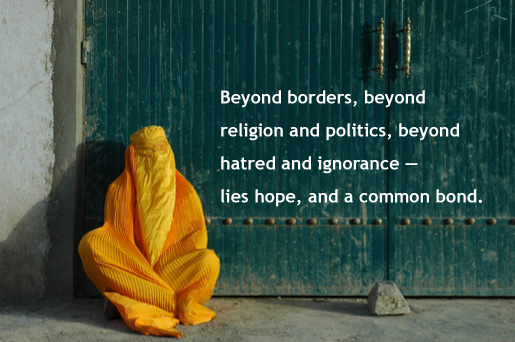 The two hoped to lend the same compassionate helping hand that they had been offered as 9/11 widows in the US to widows in Afghanistan who could never dream of recovering from their losses without strong outside support. Beyond the 11th empowers Afghan women by offering grants focused on helping women achieve literacy, receive job training, and start small businesses. In 2006, Susan and Patti traveled to Afghanistan to meet the women receiving assistance from Beyond the 11th. The film Beyond Belief documented their journey.

While Patti resigned from Beyond the 11th in 2005 to pursue education efforts focused on Afghan girls, Susan has continued her work with Beyond the 11th. Just this August, President Obama recognized her work by awarding her with a Citizen's Medal. Now, that's inspirational.

Susan is one amazing shero and her story of meeting grief and adversity with courage, compassion, and creativity has inspired millions. Though she is one heck of a rock-star humanitarian and inspirational speaker, her words are humble and her sentiments are straightforward:

"More jobs means less violence. It would be naive to think that we can change the country, but change has to start somewhere. If we can provide a skill for a woman so that she can provide for her family going forward, then that's one person or five people who will have a roof over their head, food in their bellies, and a chance for education."

Help spread the word about Susan Retik and Beyond the 11th's inspiring work by tweeting the message below:

Let's hear it for shero Susan Retik, a 9/11 widow who founded an organization working for peace, jobs, justice in Afghanistan! http://bit.ly/9JzrmL