On the 50th Anniversary of the Non-Proliferation Treaty: An Exercise in Bad Faith 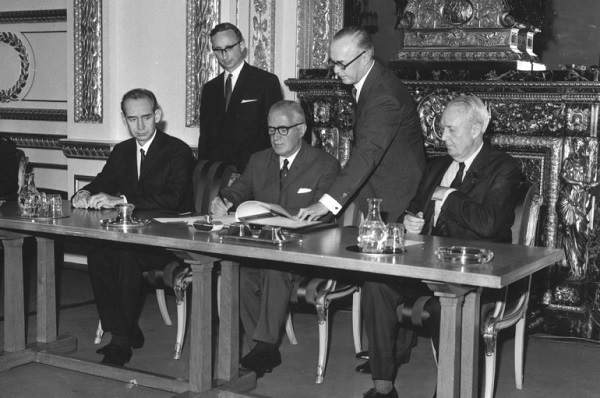 On July 1, the 1968 Nuclear Non-Proliferation Treaty (NPT) turns 50 years old. In that agreement, five nuclear weapons states— the US, Russia, UK, France, and China—promised, a half a century ago, to make “good faith efforts” to give up their nuclear weapons, while non-nuclear weapons states promised not to acquire them. Every country in the world agreed to join the treaty except for India, Pakistan, and Israel which then went on to develop their own nuclear arsenals. To sweeten the pot, the NPT’s Faustian bargain promised the non-nuclear weapons states an “inalienable right” to so-called “peaceful” nuclear power. Every nuclear power reactor is a potential bomb factory since its operation produces radioactive waste which can be enriched into bomb-grade fuel for nuclear bombs. North Korea developed its promised “peaceful” nuclear technology and then walked out of the treaty and made nuclear bombs. And it was feared that Iran was on its way to enriching their “peaceful” nuclear waste to make nuclear weapons as well, which is why Obama negotiated the  “Iran deal” which provided more stringent inspections of Iran’s enrichment activity, now under assault by the US with the election of Donald Trump.

Despite the passage of 50 years since the NPT states promised “good faith” efforts to disarm, and the required Review and Extension conference 25 years ago, which since then has instituted substantive review conferences every five years as a condition for having extended the NPT indefinitely rather than letting it lapse in 1995, there are still about 15,000 nuclear weapons on our planet. All but some 1,000 of them are in the US and Russia which keep nearly 2,000 weapons on hair-trigger alert, poised and ready to fire on each other’s cities in a matter of minutes. Only this month, the Trump administration upped the ante on a plan developed by Obama’s war machine to spend one trillion dollars over the next ten years on two new nuclear bomb factories, new weapons, and nuclear-firing planes, missiles and submarines. Trump’s new proposal for a massive Pentagon budget of $716 billion, an increase of $82 billion, was passed in the House and now in the Senate by 85 Republicans and Democrats alike, with only 10 Senators voting against it! When it comes  to gross and violent military spending, bi-partisanship is the modus operandi! And the most radical aspect of the budget is a massive expansion of the US nuclear arsenal, ending a 15-year prohibition on developing “more usable” low-yield nuclear warheads that can be delivered by submarine as well as by air-launched cruise missiles. “More usable” in this case, are bombs that are at least as destructive as the atom bombs that wiped out Hiroshima and Nagasaki, since the subsequently developed hydrogen bombs in the US arsenal are magnitudes more devastating and catastrophic.

Putin, in his March 2018 State of the Nation Address, also spoke of new nuclear-weapons bearing missiles being developed by Russia in response to the US having pulled out of the 1972 Anti-Ballistic Missile Treaty and then planting missiles in eastern Europe. He noted that:

Back in 2000, the US announced its withdrawal from the Anti-Ballistic Missile Treaty. Russia was categorically against this. We saw the Soviet-US ABM Treaty signed in 1972 as the cornerstone of the international security system. Under this treaty, the parties had the right to deploy ballistic missile defence systems only in one of its regions. Russia deployed these systems around Moscow, and the US around its Grand Forks land-based ICBM base.

Together with the Strategic Arms Reduction Treaty, the ABM Treaty not only created an atmosphere of trust but also prevented either party from recklessly using nuclear weapons, which would have endangered humankind, because the limited number of ballistic missile defence systems made the potential aggressor vulnerable to a response strike.

We did our best to dissuade the Americans from withdrawing from the treaty. All in vain. The US pulled out of the treaty in 2002. Even after that we tried to develop constructive dialogue with the Americans. We proposed working together in this area to ease concerns and maintain the atmosphere of trust. At one point, I thought that a compromise was possible, but this was not to be. All our proposals, absolutely all of them, were rejected. And then we said that we would have to improve our modern strike systems to protect our security.

Ironically, this week the US Department of State, under the heading “Diplomacy in Action”, issued a joint statement with US Secretary of State Pompeo and the Russian and UK Foreign Ministers, extolling the NPT as the “essential foundation for international efforts to stem the looming threat—then and now—that nuclear weapons would proliferate across the globe…and has limited the risk that the vast devastation of nuclear war would be unleashed.”

All this is occurring against the stunning new development of the negotiation and passage of a new Treaty for the Prohibition of Nuclear Weapons, the culmination of a ten-year campaign by the International Campaign to Abolish Nuclear Weapons (ICAN), which succeeded in lobbying for 122 nations to adopt this new treaty which prohibits nations from developing, testing, producing, manufacturing, transferring, possessing, stockpiling, using or threatening to use nuclear weapons, or allowing nuclear weapons to be stationed on their territory. Just as the world has banned chemical and biological weapons, as well as landmines and cluster bombs, the new treaty to ban nuclear weapons closes the legal gap created by the NPT which only requires “good faith efforts” for nuclear disarmament, and doesn’t prohibit them.

At the last NPT review in 2015, South Africa spoke eloquently about the state of nuclear apartheid created by the NPT where the nuclear “haves” hold the rest of the world hostage to their devastating nuclear threats which provided even more impetus for the successful negotiation of the ban treaty. ICAN won the Nobel Peace Prize for their winning campaign and is now engaged in lobbying for ratification by the 50 states required by the ban treaty to enter into force. To date, 58 nations have signed the treaty, with 10 national legislatures having weighed in to ratify it (see www.icanw.org). None of the nine nuclear weapons states or the US nuclear alliance nations in NATO, as well as South Korea, Australia, and surprisingly, Japan, have signed the treaty and all of them boycotted the negotiations, except for the Netherlands because a grassroots campaign resulted in their Parliament voting to mandate attendance at the ban negotiations, even though they voted against the treaty. Grassroots groups are organizing in the five NATO states that host US nuclear weapons—Germany, the Netherlands, Belgium, Italy, Turkey—to remove these weapons from US bases now that they are prohibited.

There is a vibrant new divestment campaign, for use in the nuclear weapons states and their allies sheltering under the US nuclear umbrella, www.dontbankonthebomb.com. There is also a parliamentary pledge for legislators to sign who live in nuclear weapons states or allied states at http://www.icanw.org/projects/pledge/ calling on their governments to join the ban treaty. In the US, there is a campaign to pass resolutions at city and state levels in favor of the new treaty at www.nuclearban.us. Many of these nuclear divestment campaigns (such as World BEYOND War) are working in cooperation with the new Code Pink Divest from the War Campaign.

It remains to be seen whether the NPT will continue to have relevance in light of the evident lack of integrity by the parties who promised “good faith” efforts for nuclear disarmament, and instead are all modernizing and inventing new forms of nuclear terror.   The recent detente between the US and North Korea, with proposals to sign a peace treaty and formally end the Korean War, after a 65 year cease-fire since 1953, and the proposed meeting between the two nuclear gargantuans, the US and Russia, together with the new nuclear ban treaty, may be an opportunity to shift gears and look forward to a world without nuclear weapons if we can overcome the corrupt forces that keep the military-industrial-academic-congressional complex in business, seemingly forever!

Alice Slater serves on the Coordinating Committee of World Beyond War.