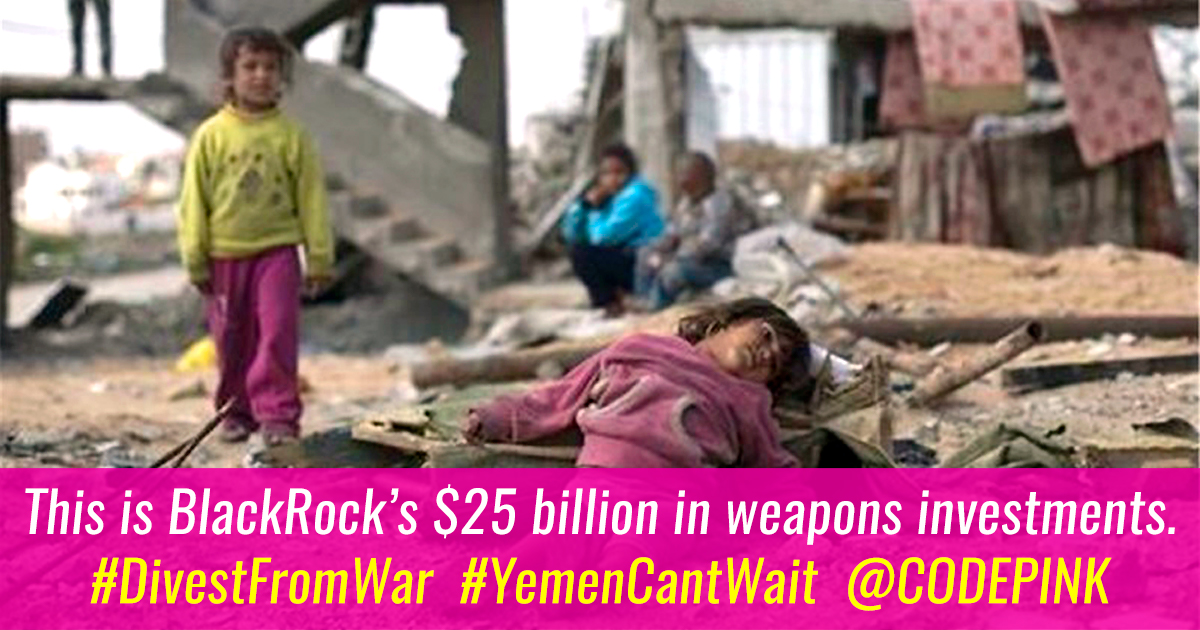 You’re not going to believe this, but it’s true. Every 10 minutes a child in Yemen dies from war-related hunger and disease—a humanitarian crisis of epic proportions. Meanwhile, US weapons companies, and the financial firms like BlackRock that invest in them, make billions of dollars from this war. And now for the kicker... A group that works to save the lives of these suffering Yemeni children, the International Rescue Committee (IRC), is giving their annual humanitarian award to the CEO of BlackRock, Larry Fink, a man who profits from that very same war.

Won’t you join us in asking the International Rescue Committee to find a better honoree than a man whose company has invested over $23 billion in the weapons manufacturers Boeing, General Dynamics, Lockheed Martin, Northrop Grumman and Raytheon?

On Thursday, the U.S.-backed Saudi coalition struck again in Yemen. This time, they dropped bombs on a Yemeni hospital and killed at least 26 people in the port city of Hodeidah, the main entry point for food in a country teetering on the brink of famine and another cholera outbreak.

Meanwhile, BlackRock and its CEO, Larry Fink, are making a killing on the killing in Yemen. Despite his role in this death and destruction, the International Rescue Committee is giving Fink a humanitarian award. You can't be a humanitarian while profiting from famine and war. Join us in sending IRC a message.

Today, two-thirds of the Yemeni population is at risk of starvation, with a million people gripped by a deadly cholera outbreak. While Larry Fink enjoys his morning cereal, the companies he funds are selling machine guns, automatic rifles and guided missiles to those waging this gruesome war. Ignoring the suffering—and capitalizing on it—is not a profile in humanitarian courage.

Tell the IRC that Larry Fink does not deserve a  "Humanitarian" Award. Because at the very moment Fink collects his award from the IRC, he'll be raking in millions as a war profiteer.