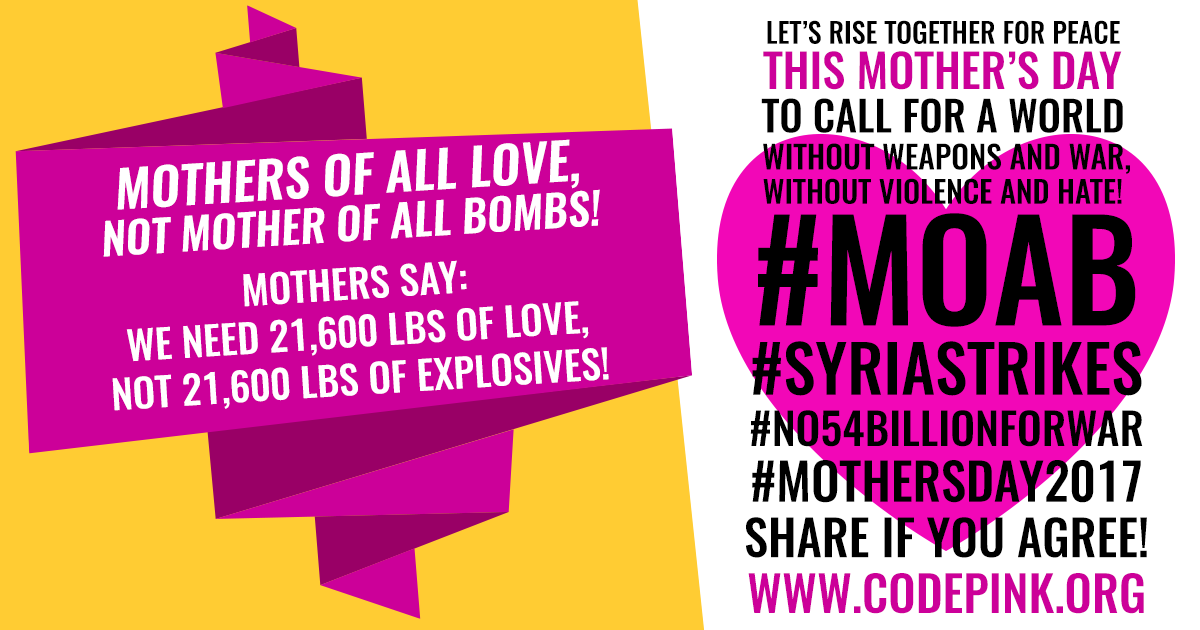 Yesterday, the Afghan people suffered the effects of the largest non-nuclear bomb ever dropped. The Massive Ordnance Air Blast Bomb (MOAB) is 21,600-pounds of explosive. And you know what’s also massive about this bomb? It cost $16 million just to kill 36 individuals!

Nicknamed by the military as Mother of all Bombs, the MOAB is a mother’s worst nightmare. This Mother’s Day, let’s celebrate the giving and loving of life that mothers bring. Instead of increasing military spending by $54 billion to drop massive bombs, we need massive increases in love, health, greenery, education, good food, peace and all the other things mothers need for their children.

Join us on May 14 in D.C. in front of the White House and in NYC for a Mother’s Day stroll with the Granny Peace Brigade. If you cannot make it to D.C. or NYC, contact Mariana to organize a Mother’s Day march or action in your city.

What can you do locally? Use our toolkit to get your city to pass a resolution opposing Trump’s $54 billion for war.

Mother's Day originally started in 1872 after the Civil War when Julia Ward Howe called for a "Mother's Day for Peace” in protest of all the carnage caused by a war that had taken away our mothers’ children. Today, more than ever, we must heed Julia Ward Howe’s call to "Disarm, Disarm!" Whether it is the $59 million Tomahawk missiles into Syria last week or the dropping of the $16 million “Mother of all Bombs” in Afghanistan this week, we know that military intervention will only bring more death, destruction, and heartbreak.

Join us May 14 in D.C., in NYC, or contact Mariana to organize a Mother’s Day peace event in your city and check out our toolkit to get your city to pass a resolution opposing Trump’s $54 billion increase for war. And share the image at the top of this email on your Facebook and Twitter accounts.

Let’s rise together for peace this Mother’s Day to call for a world without weapons and war, without violence and hate, without bans and walls, where our tax dollars are spent on programs that support life rather than war.

Toward a world where no mother loses her child to bombs, guns or war!
Ann, Ariel, Jodie, Mariana, Mark, Medea, Nancy, Paki, Paula, Taylor and Tighe