Keep Torture Apologists Out of the Biden Cabinet! D22 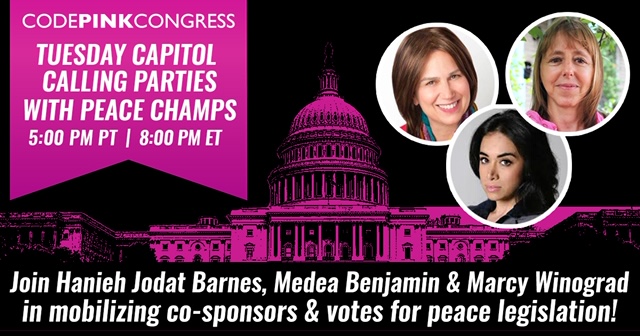 Register in advance for this meeting here!

After registering, you will receive a confirmation email containing information about joining the meeting.

Zoom w/a former CIA officer who blew the whistle on waterboarding & wants to keep torture apologists out of the White House!

Meet John Kiriakou as he blasts Biden’s possible nomination of Mike Morell as CIA Director and nomination of Avril Haines as Dir. of National Intelligence.

JOIN OUR CODEPINK CALLING PARTY, TOO.

At the end of our Zoom we will host a CODE PINK CALLING PARTY to urge US Senators to reject torture apologists in Biden’s cabinet—say #No2Morell for CIA and #NOtoHaines for Intelligence. Together, in real time, we’ll leave messages for Senators to stand with CODE PINK in speaking out against cabinet positions for torture defenders and apologists.

Become a CODE PINK SUPER VOLUNTEER—MAKE CALLS WITH US ON TUESDAY.

John Kiriakou is a former CIA officer, former senior investigator for the Senate Foreign Relations Committee, and former counterterrorism consultant for ABC News. He was responsible for the capture in Pakistan in 2002 of Abu Zubaydah, then believed to be the third-ranking official in al-Qaeda. In 2007, Kiriakou blew the whistle on the CIA’s torture program, telling ABC News that the CIA tortured prisoners, that torture was official U.S. government policy, and that the policy had been approved by then-President George W. Bush. He became the sixth whistleblower indicted by the Obama administration under the Espionage Act — a law designed to punish spies. He served 23 months in prison as a result of the revelation.