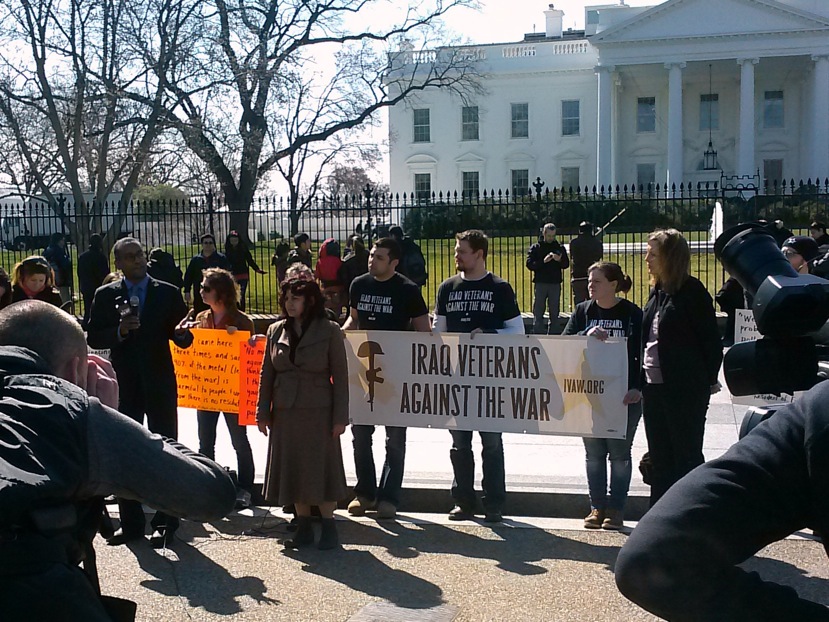 Marking the 10th anniversary of the “Shock and Awe” invasion of Iraq, U.S. Veterans, Iraqi human rights organizations and their allies launched the Right to Heal initiative today in front of the White House.

Speakers, which included both U.S. veterans and Iraqis, focused on the rights of everyone on all sides of this conflict, especially women, to heal. One in three women in the U.S. military are sexually assaulted, and women face discrimination in filing for disability when they return home. Many Iraq veterans enlisted during peacetime, or were misled by our government with lies about weapons of mass destruction. These lies have cost the lives of U.S. soldiers and Iraqis alike. Survivors continue to live with Post-Traumatic Stress, Traumatic Brain Injury, and Sexual Trauma. In Iraq, depleted uranium and other chemical weapons have increased the rates of birth defects and cancer. The war has destroyed much of the infrastructure and many Iraqis are without water or electricity. While US officials used the rhetoric of women’s liberation to justify the invasion, women’s rights in Iraq have suffered a major blow due to the war.

Everyone deserves a chance to heal from this war that our government led us into. We must demand full health care and services for veterans, and reparations for Iraq proportional to the amount of damage we have caused. We cannot undo our crimes, but we can take the steps to make amends.

Finally, as talk increases about war with Iran, let us do everything we can to prevent more devastation. We have the opportunity now to prevent these same mistakes and atrocities from happening again. Please, contact your senators now and urge them to commit to diplomacy.