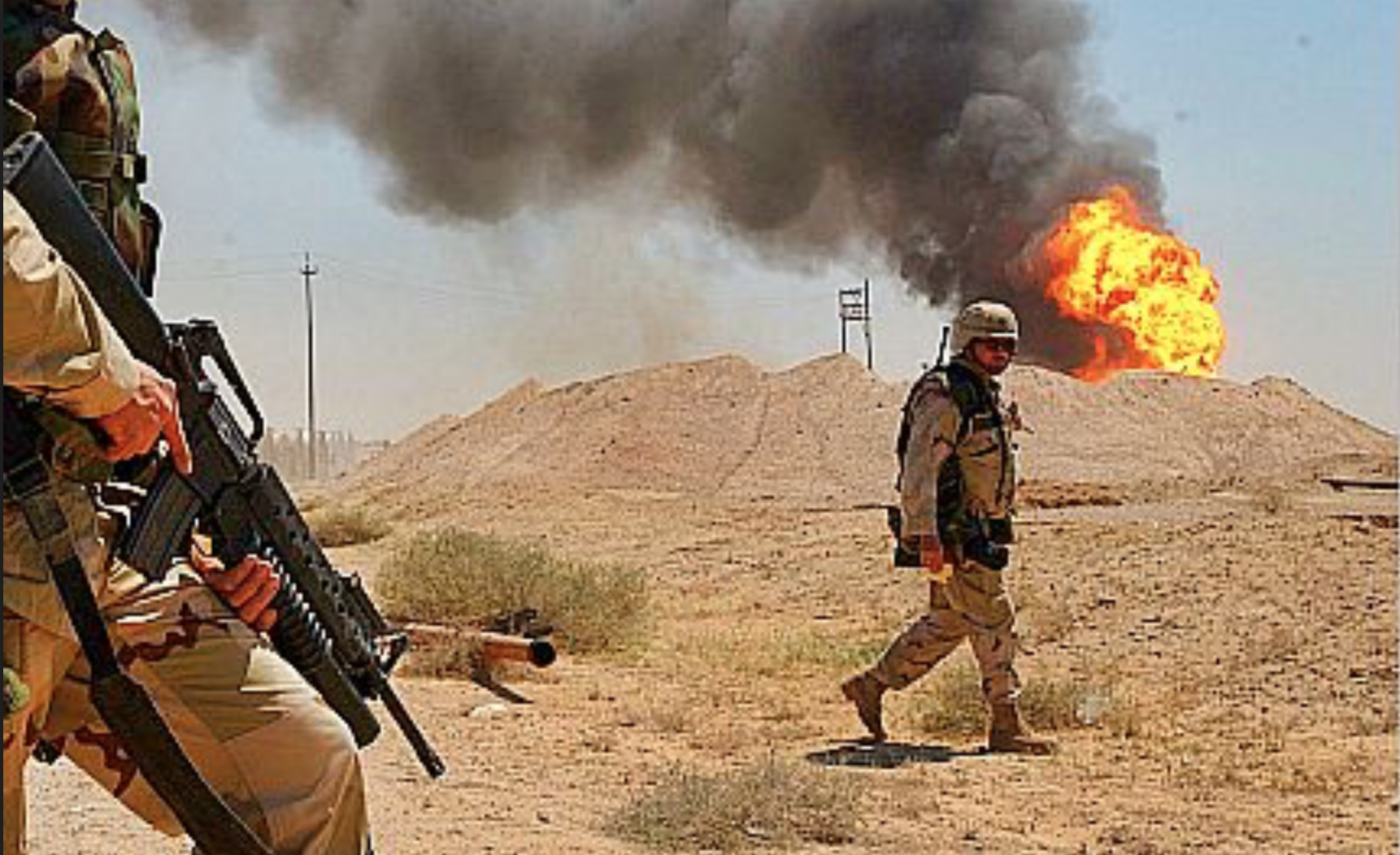 The environmental justice movement that is surging globally is intentionally intersectional, showing how global warming is connected to issues such as race, poverty, migration and public health. One area intimately linked to the climate crisis that gets little attention, however, is militarism. Here are some of the ways these issues--and their solutions--are intertwined.

1. The US military protects Big Oil and other extractive industries. The US military has often been used to ensure that US companies have access to extractive industry materials, particularly oil, around the world. The 1991 Gulf War against Iraq was a blatant example of war for oil; today the US military support for Saudi Arabia is connected to the US fossil fuel industry’s determination to control access to the world’s oil. Hundreds of the  US military bases spread around the world are in resource-rich regions and near strategic shipping lanes. We can’t get off the fossil fuel treadmill until we stop our military from acting as the world’s protector of Big Oil.

2.  The Pentagon is the single largest institutional consumer of fossil fuels in the world. If the Pentagon were a country, its fuel use alone would make it the 47th largest greenhouse gas emitter in the world, greater than entire nations such as Sweden, Norway or Finland. US military emissions come mainly from fueling weapons and equipment, as well as lighting, heating and cooling more than 560,000 buildings around the world.

3. The Pentagon monopolizes the funding we need to seriously address the climate crisis. We are now spending over half of the federal government’s annual discretionary budget on the military when the biggest threat to US national security is not Iran or China, but the climate crisis. We could cut the Pentagon’s current budget in half and still be left with a bigger military budget than China, Russia, Iran and North Korea combined. The $350 billion savings could then be funnelled into the Green New Deal. Just one percent of the 2019 military budget of $716 billion would be enough to fund 128,879 green infrastructure jobs instead.

4. Military operations leave a toxic legacy in their wake. US military bases despoil the landscape, pollute the soil, and contaminate the drinking water. At the Kadena Base in Okinawa, the US Air Force has polluted local land and water with hazardous chemicals, including arsenic, lead, polychlorinated biphenyls (PCBs), asbestos and dioxin. Here at home, the EPA has identified over 149 current or former military bases as SuperFund sites because Pentagon pollution has left local soil and groundwater highly dangerous to human, animal, and plant life. According to a 2017 government report, the Pentagon has already spent $11.5 billion on environmental cleanup of closed bases and estimates $3.4 billion more will be needed.

5. Wars ravage fragile ecosystems that are crucial to sustaining human health and climate resiliency. Direct warfare inherently involves the destruction of the environment, through bombings and boots-on-the-ground invasions that destroy the land and infrastructure. In the Gaza Strip, an area that suffered three major Israeli military assaults between 2008 and 2014. Israel’s bombing campaigns targeted sewage treatment and power facilities, leaving 97% of Gaza’s freshwater contaminated by saline and sewage, and therefore unfit for human consumption. In Yemen, the Saudi-led bombing campaign has created a humanitarian and environmental catastrophe, with more than 2,000 cases of cholera now being reported each day. In Iraq, environmental toxins left behind by the Pentagon’s devastating 2003 invasion include depleted uranium, which has left children living near US bases with an increased risk of congenital heart disease, spinal deformities,  cancer, leukemia, cleft lip and missing or malformed and paralyzed limbs.

6. Climate change is a “threat multiplier” that makes already dangerous social and political situations even worse. In Syria, the worst drought in 500 years led to crop failures that pushed farmers into cities, exacerbating the unemployment and political unrest that contributed to the uprising in 2011. Similar climate crises have triggered conflicts in other countries across the Middle East, from Yemen to Libya. As global temperatures continue to rise, there will be more ecological disasters, more mass migrations and more wars. There will also be more domestic armed clashes—including civil wars—that can spill beyond borders and destabilize entire regions. The areas most at risk are sub-Saharan Africa, the Middle East, and South, Central and Southeast Asia.

7. US sabotages international agreements addressing climate change and war. The US has deliberately and consistently undermined the world’s collective efforts to address the climate crisis by cutting greenhouse gas emissions and speeding the  transition to renewable energy. The US refused to join the 1997 Kyoto Protocol and the Donald Trump’s withdrawal from the 2015 Paris Climate Accord was the latest example of this flagrant disregard for nature, science, and the future. Similarly, the US refuses to join the International Criminal Court that investigates war crimes, violates international law with unilateral invasions and sanctions, and is withdrawing from nuclear agreements with Russia. By choosing to prioritize our military over diplomacy, the US sends the message that “might makes right” and makes it harder to find solutions to the climate crisis and military conflicts.

8. Mass migration is fueled by both climate change and conflict, with migrants often facing militarized repression. A 2018 World Bank Group report estimates that the impacts of climate change in three of the world’s most densely populated developing regions—sub-Saharan Africa, South Asia, and Latin America—could result in the displacement and internal migration of more than 140 million people before 2050. Already, millions of migrants from Central America to Africa to the Middle East are fleeing environmental disasters and conflict. At the US border, migrants are locked in cages and stranded in camps. In the Mediterranean, thousands of refugees have  died while attempting dangerous sea voyages. Meanwhile, the arms dealers fuelling the conflicts in these regions are profiting handsomely from selling arms and building detention facilities to secure the borders against the refugees.

9. Militarized state violence is leveled against communities resisting corporate-led environmental destruction. Communities that fight to protect their lands and villages from oil drills, mining companies, ranchers, agribusiness, etc. are often met with state and paramilitary violence. We see this in the Amazon today, where indigenous people are murdered for trying to stop clear-cutting and incineration of their forests. We see it in Honduras, where activists like Berta Caceres have been gunned down for trying to preserve their rivers. In 2018, there were 164 documented cases of environmentalists murdered around the world. In the US, the indigenous communities protesting plans to build the Keystone oil pipeline in South Dakota were met by police who targeted the unarmed demonstrators with tear gas, bean-bag rounds, and water cannons—intentionally deployed in below-freezing temperatures. Governments around the world are expanding their state-of-emergency laws to encompass climate-related upheavals, perversely facilitating the repression of environmental activists who have been branded as “eco-terrorists” and who are subjected to counterinsurgency operations.

10. Climate change and nuclear war are both existential threats to the planet. Catastrophic climate change and nuclear war are unique in the existential threat they pose to the very survival of human civilization. The creation of nuclear weapons—and their proliferation--was spurred by global militarism, yet nuclear weapons are rarely recognized as a threat to the future of life on this planet. Even a very "limited" nuclear war, involving less than 0.5% of the world's nuclear weapons, would be enough to cause catastrophic global climate disruption and a worldwide famine, putting up to 2 billion people at risk. The Bulletin of the Atomic Scientists has set its iconic Doomsday Clock to 2 minutes to midnight, showing the grave need for the ratification of the Treaty on the Prohibition of Nuclear Weapons. The environmental movement and the anti-nuke movement need to work hand-in-hand to stop these threats to planetary survival.

To free up billions of Pentagon dollars for investing in critical environmental projects and to eliminate the environmental havoc of war, movements for a livable, peaceful planet need to put “ending war” at the top of the “must do” list.

Medea Benjamin is cofounder of CODEPINK for Peace, and author of several books, including Inside Iran: The Real History and Politics of the Islamic Republic of Iran. For a full understanding of the intersection between war and the climate, read Gar Smith’s War and Environmental Reader.