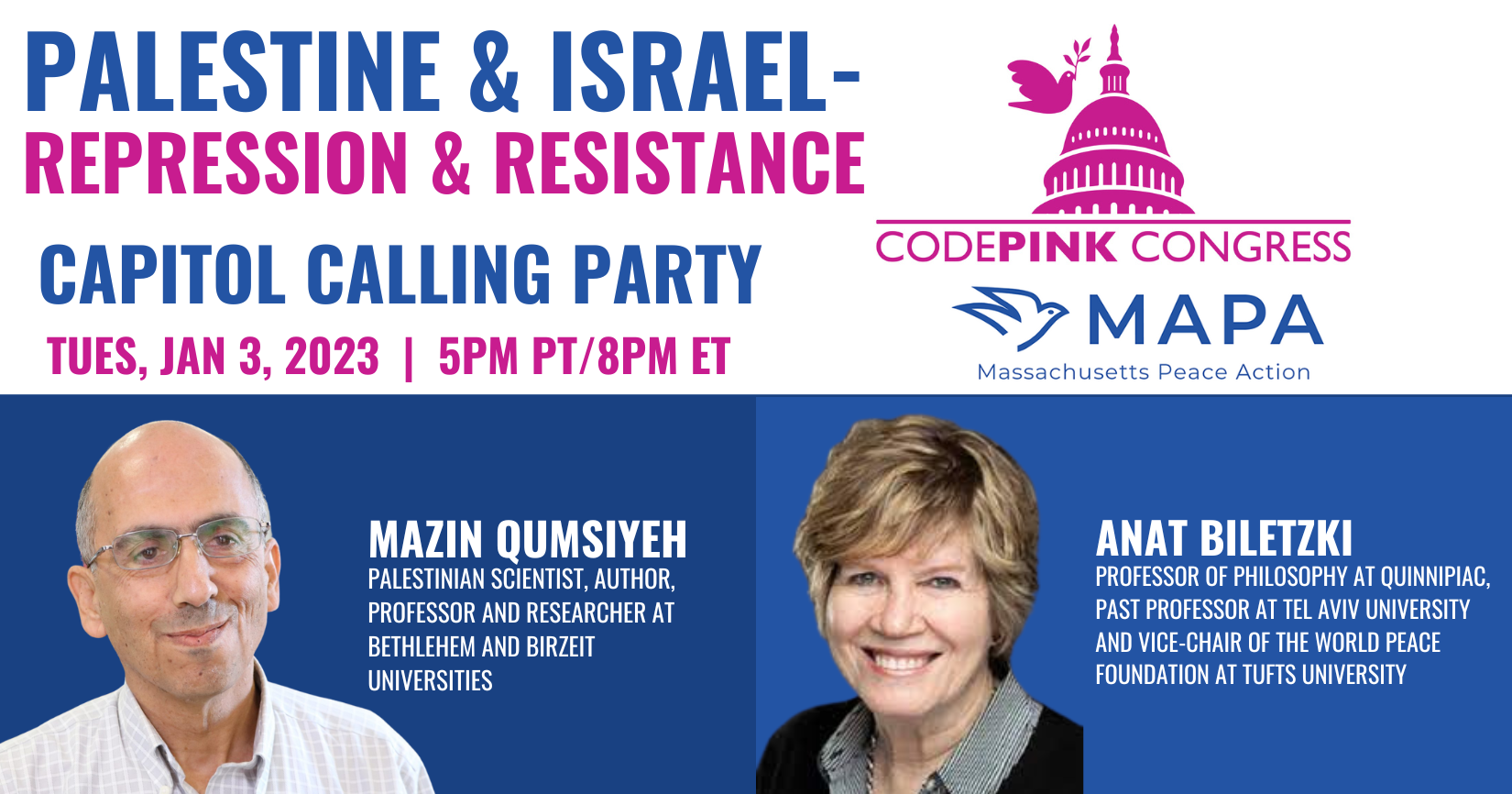 On Tuesday, January 3rd, join CODEPINK Congress for the next Capitol Calling Party on Israel and Palestine.

Israeli settler violence against Palestinians escalated in 2022, with West Bank settlers on the rampage, defiling mosques, vandalizing shops and assaulting Palestinians in Hebron and other Palestinian cities. Instead of stopping the settlers, the Israeli military turned on Palestinians, adding to the year’s death toll: 150 Palestinians killed, 33 of them children. Meanwhile, the most racist Israeli government returns to power with former prime minister Benjamin Netanyahu – under criminal indictment – set to serve his sixth term. This new ultra-nationalist government stands in explicit – no longer implicit – opposition to a Palestinian state and threatens to strip the courts of their power.

US Secretary of State Blinken insists the US commitment to apartheid Israel is ironclad, despite whispers last month the Biden administration might refuse to meet with some of the most reactionary members of the new Israeli government.

Join us as we detail the situation on the ground in Palestine and examine US congressional and grassroots efforts to end US complicity in Israeli crimes.

Mazin Qumsiyeh Mazin Qumsiyeh is an activist, environmentalist and author. He is founder and director of the Palestine Institute for Biodiversity and Sustainability (PIBS) at Bethlehem University.  He served on the faculties of the University of Tennessee, Duke University and the Yale University, and now researches and teaches at Bethlehem university. He is the author of hundreds of articles and several books including Sharing the Land of Canaan and Popular Resistance in Palestine.

Anat Biletzki is a professor of philosophy at Quinnipiac and past professor at Tel Aviv University. She is a steering committee member of FISP – The International Federation of Philosophical Societies. She also serves as Vice-Chair of the World Peace Foundation at Tufts University, and is co-founder and co-director of the Program for Human Rights and Technology at MIT. Born in Jerusalem, she was Chair of the Board of B’Tselem, the Israeli human rights NGO, from 2001 to 2006, having served as a B'Tselem Board member for several years before. Her most recent book is Philosophy of Human Rights: A Systematic Introduction (2019).

Hassan El-Tayyab is FCNL’s legislative director for Middle East policy, and the former co-director of the national advocacy group Just Foreign Policy. His writings and commentaries have been featured in numerous news outlets, including CNN, BBC World News, Politico, The Hill, Al Jazeera, The Huffington Post, The Intercept and more.