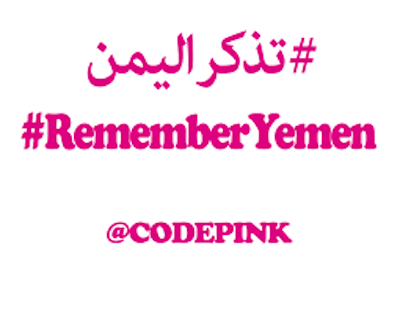 WASHINGTON — CODEPINK issued the following statement about the Senate March 20 vote on S.J.Res 54 to end US involvement in the Saudi-led war on Yemen:

Today 44 Senators voted in favor of ending US support for the Saudi-led war on Yemen that has caused the greatest humanitarian disaster on earth.

The US is providing ongoing support for Saudi Arabia’s devastating war on Yemen. The war has resulted in a massive cholera outbreak and malnutrition so severe that a Yemeni child dies every 10 minutes from hunger.

Thanks to the bipartisan efforts of Senators Sanders, Lee and Murphy, and an enormous grassroots mobilization, the US’s unauthorized role in the war on Yemen’s was brought to a Senate vote today.

We commend the 44 Senators, Democrats and Republicans alike, who voted today for peace and an end to the suffering of the people of Yemen. Those who voted against the resolution voted to keep the war going. They are responsible for the ongoing suffering. The blood of Yemeni children is on their hands.

We also thank the many thousands of CODEPINK activists and activists with other organizations who took the time to meet, call and write their Senators.

Today, as we also mark 15 years since the US disastrous war in Iraq, a war built on lies for which the Iraqi people continue to suffer, we rededicate ourselves to the struggle for peace and negotiations. This war in Yemen will only end through dialogue; it’s time to start the talks and stop the fighting.

We are inspired by the strong message sent today by 44 Senators that the US-supported Saudi-led war on Yemen must end. We will continue to make this demand in the streets and in the halls of congress.