Why I started Under the Hood in Killeen, TX 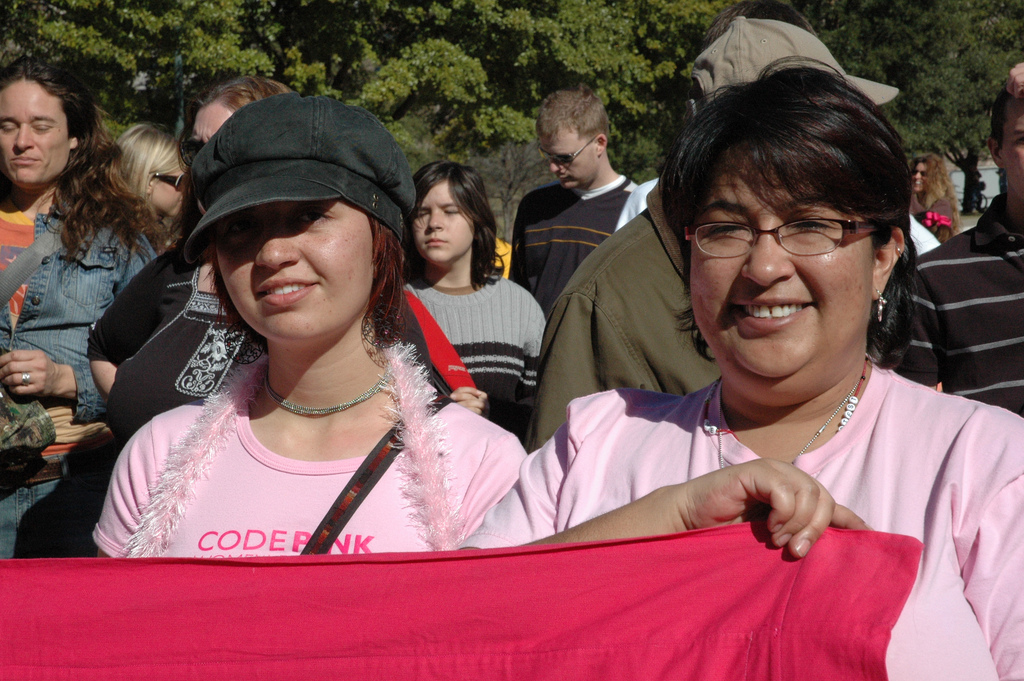 In 2005 my husband was severely wounded in Iraq and the Army labeled him "undeployable." But, in 2007, they deployed him again. That is when I began to realize that I could no longer support the war and and started looking for the comfort and support of others who felt as I did. One day I was looking at Rosie O'Donnell's website and I saw a picture of a woman confronting Condeleeza Rice with bloody hands. My first thought was "that is so ballsy!" I wanted to know who this was so I read Rosie's blog and learned that she was with CODEPINK I googled and found the national website and immediately joined. Then, I began to look for a local chapter. Of course, there wasn't one in Killeen, Texas, but, I did find the website for CODEPINK Austin. I showed up at their next meeting with my two daughters all in pink and found not only the comfort I had been seeking, but, also the opportunity to take action.

Through CODEPINK Austin, I heard about Iraq Veterans Against the War and became connected to members in the Austin and Fort Hood areas. In the spring of 2008 the Fort Hood chapter of IVAW was contacted by a longtime activist who had been at the Oleo Strut during the Vietnam days, and who wanted to offer his fundraising abilities to help start a similar coffeehouse for Iraq veterans. Fort Hood IVAW members recognized the value and importance of having such a hangout for GIs, but, they did not feel that they could organize or operate it. So, they came to me for help. I contacted Alice Embree and Fran Hanlon, two CODEPINK women who are now board members, and in May of 2008 we sat down with IVAW members to discuss the creation of what is now Under the Hood Cafe and Outreach Center.

For the soldiers who visit regularly, Under the Hood has become a home and we have become family. They return to base and tell their buddies about us. They come and hang out because they can relax and talk openly with us. They tell us about their hardships, they ask for help, they seek information about their rights, and sometimes they find the strength to say NO to war.

Thank you, CODEPINK for your support. This is what keeps me going. Living in the military culture in Killeen is not easy. Hearing the stories and witnessing the pain these wars have caused these young people is very difficult. When I need to be re-inspired or re-motivated, I go to Austin and join my CODEPINK friends in action. It gives me the strength to come back to Fort Hood and continue the struggle.

Here is a personal story from SPC Victor Agosto, Afghanistan War Resister:
"I lived a miserable existence since I turned against the war in Iraq in 2007. I have frequented Under the Hood Café since its grand opening in March of 2009. The café has become my refuge from a closed-minded and dehumanizing military culture. I have seen it bring joy to every soldier and civilian that has become a regular here. The civilian staff is dedicated to helping soldiers deal with personal and legal issues. I have attained a sense of purpose that I have never had in my life. I am now committed to the success of both Under the Hood and the anti-war movement. I have spent countless hours discussing and thinking about ways to end these wars. The support I have received from my family at Under the Hood has helped me take the liberating leap from obedient soldier to war resister. I cannot remember the last time I was this happy. Under the Hood has changed my life forever."
BREAKING NEWS: Read CODEPINK's statement on the tragedy at Ft. Hood here.
CODEPINK Austin coordinator and Under the Hood board member Fran Hanlon, and Ret. Col. Ann Wright, were quoted in this piece in the Washington Post regarding the shootings at Ft. Hood.
See more photos of Under the Hood here.

See Under the Hood online at http://www.underthehoodcafe.org/.

There are only a few coffee houses for GIs throughout the country.  Another coffee house is
Coffee Strong in Olympia, WA (givoice.org, coffeestrong.com).

You can read about the Grand Opening of Under the Hood Cafe on our website here.

News Articles about the plight for veterans of war:
War objector gets out of jail
By Rebecca LaFlure
Killeen Daily Herald  Sunday, Aug. 30 2009
http://www.kdhnews.com/news/story.aspx?s=35497

Anti-war cafe opens in the shadow of Fort Hood
By Jeremy Schwartz
Off-post, soldiers can let down their guard and open up about the war at Under the Hood cafe.
AMERICAN-STATESMAN STAFF
August 15, 2009

Art as Resistance
by Dahr Jamail
September 7th, 2009
http://dahrjamailiraq.com/art-as-resistance
"Soldiers returning from Iraq and Afghanistan have tough truths to tell, and it has been well demonstrated that the establishment media does not want to broadcast these. Given the lack of an outlet for anti-war voices in the corporate media, many contemporary veterans and active-duty soldiers have embraced the arts as a tool for resistance, communication and healing."

GI Resistance under the radar
By Sarah Lazare, Courage to Resist for Truthout. August 3, 2009

OUR TROOPS AND IRAQIS ARE STILL DYING
An Open Letter to the Peace/Anti-War Movement from Iraq Veterans Against the War, Military Families Speak Out, and Veterans For Peace
March 19, 2009

NY TIMES on women with PTSD