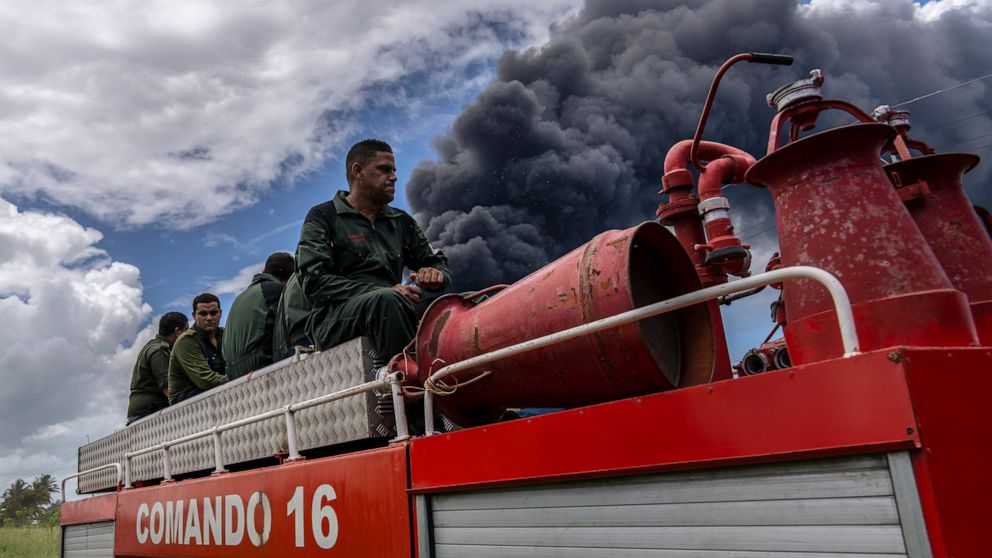 By now, the images of the oil explosion that erupted in the Cuban province of Matanzas on Friday, August 5 and continues blazing have become international news. When lightning struck an oil tank in Cuba’s largest oil storage facility, it quickly exploded and began to spread to nearby tanks. As of now, four of the eight tanks have caught fire. Dozens of people have been hospitalized, over 120 have been reported injured, at least 16 firefighters are still reported missing and one firefighter has died.

This latest disaster - the largest oil fire in Cuba’s history - comes at a time when Cuba is currently undergoing an energy crisis due to soaring global fuel costs, as well as over-exploited and obsolete infrastructure. The raging fire will undoubtedly further exacerbate the electricity outages that Cubans are suffering from as a result of the ongoing energy crisis that is occurring in the middle of one of the hottest summers on record globally.

Almost immediately, the Cuban government requested international assistance from other countries, particularly its neighbors that have experience in handling oil-related fires. Mexico and Venezuela responded immediately and with great generosity. Mexico sent 45,000 liters of firefighting foam in 16 flights, as well as firefighters and equipment. Venezuela sent firefighters and technicians, as well as 20 tons of foam and other chemicals.

The U.S., on the other hand, offered technical assistance, which amounted to phone consultations. Despite having invaluable expertise and experience with major fires, the U.S. has not sent personnel, equipment, planes, materials, or other resources to its neighbor that would actually help minimize the risk to human life and the environment. The U.S. Embassy in Havana instead offered condolences and stated on day four of the blazing fire that they were “carefully watching the situation” and that U.S. entities and organizations could provide disaster relief. They even posted an email, [email protected], for people who want to help, saying “our team is a great resource for facilitating exports and donations of humanitarian goods to Cuba or responding to any questions.” But people who have contacted that email for help receive an automated response in return, telling people to look at their fact sheet from a year ago.

Contrast this to Cuba’s response to Hurricane Katrina in 2005, when the Cuba government offered to send to New Orleans 1,586 doctors, each carrying 27 pounds of medicine—an offer that was rejected by the United States.

While the U.S. government pays lip service to helping in Cuba’s emergency, the truth is that U.S. sanctions on Cuba create real and significant barriers to organizations trying to provide assistance to Cubans, both in the United States and abroad. For example, Cuba sanctions often require U.S. organizations to get Commerce Department export licenses. Another obstacle is the lack of commercial air cargo service between the U.S. and Cuba, and most commercial flights are prohibited from carrying humanitarian assistance without a license. Cuba’s inclusion in the State Sponsor of Terrorism List means that banks, in both the United States and abroad, are reluctant to process humanitarian donations. And while donative remittances (which can be sent for humanitarian purposes) have been recently re-authorized by the Biden administration, there is no mechanism in place to send them, as the U.S. government refuses to use the established Cuban entities that have historically processed them. Moreover, payment and fundraising platforms such as GoFundMe, PayPal, Venmo and Zelle, will not process any transactions destined or related to Cuba due to U.S. sanctions.

In any case, the response to this disaster should come primarily from the U.S. government, not NGOs. An Obama-era Presidential Policy Directive specifically mentions U.S. cooperation with Cuba “in areas of mutual interest, including diplomatic, agricultural, public health, and environmental matters, as well as disaster preparedness and response.”  Despite the 243 sanctions imposed by the Trump administration - and overwhelmingly maintained by the Biden White House - the Policy Directive appears to remain in effect.  In addition, Cuba and the United States signed a bilateral Oil Spill Preparedness and Response Agreement in 2017 prior to Trump taking office, which the U.S. noted means both countries “will cooperate and coordinate in an effort to prevent, contain, and clean up marine oil and other hazardous pollution in order to minimize adverse effects to public health and safety and the environment.”  The agreement provides a roadmap for bilateral cooperation to address the current humanitarian and environmental disaster.  In addition, the Office of Foreign Disaster Assistance, which is part of USAID, “is responsible for leading and coordinating the U.S. government’s response to disasters overseas,” including sending technical experts as they have in more than 50 countries. Neither OFDA nor any other part of USAID, which spends approximately $20 million annually in regime change funding in Cuba (primarily to Florida-based groups), have offered humanitarian aid thus far.

As Congress takes important steps to advance legislation to address climate change and disasters, the Biden administration is watching a potential ecological disaster 90 miles from the U.S. coastline without offering meaningful assistance to contain it, both to protect the Cuban people but also to mitigate any potential marine damage to the narrow strait that separates the two countries.

Withholding assistance at this critical time indicates to Cubans, Cuban Americans and the world that the Biden Administration is not really interested in the well-being of the Cuban people, despite statements to the contrary. This is an opportunity to show compassion, regional cooperation, environmental responsibility, and, overall, to be a good neighbor. It is also an opportunity for the Biden administration to finally reject the toxic Trump administration policies towards Cuba and restart the broad bilateral diplomatic engagement that was so successfully initiated under the Obama administration.

Natasha Lycia Ora Bannan is a human rights lawyer and has written extensively about the principles of self-determination, democratic norms and gender justice. She is on the steering committee of ACERE (Alliance for Cuba Engagement and Respect).

Medea Benjamin is co-founder of Global Exchange, CODEPINK: Women for Peace and ACERE (Alliance for Cuba Engagement and Respect). She is the author of several books, including No Free Lunch: Food and Revolution in Cuba Today.