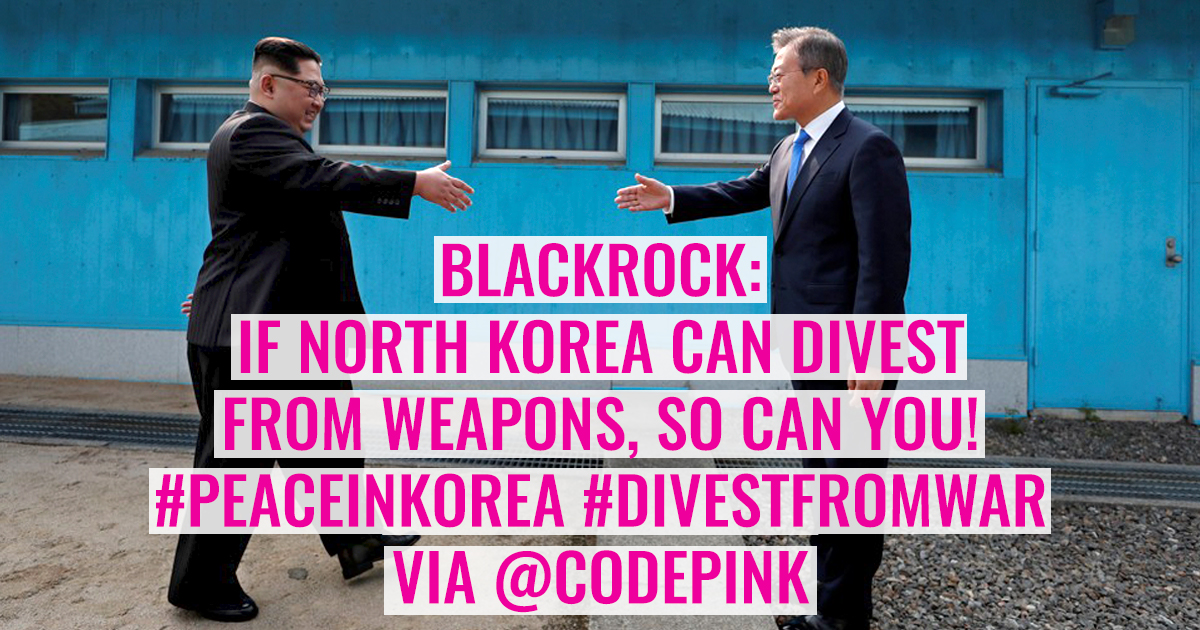 On Friday, as I watched North Korean leader Kim Jong-un gently take the hand of South Korean President Moon Jae-in to walk back and forth across the line that has signified the divide between their two countries for 74 years, I was in tears.  It was just three years ago that 30 international women, drawn together by Christine Ahn, crossed the DMZ with a call for the peace on the Korean peninsula. Medea, Ann Wright, and I were there. We saw the insanity of the separation, a line drawn in Washington D.C. in 1953 that tore apart families, separating parent from child, brother from sister. At that time the leadership of South Korea was not talking to North Korea, and the idea of them meeting was a distant dream. Three years later, the two leaders met and produced a joint peace declaration!

The North and South Korean leaders have laid out a path toward a comprehensive peace. They have agreed to phase denuclearization; a peace treaty; reuniting families; connecting rail and roads, and transforming the DMZ into a peace zone. The agreement between these two nations exemplifies the breadth and depth of what truly peaceful relations would look like. Now we all have to ensure that the United States will also move forward and make the necessary compromises to establish peace on the Korean Peninsula.

After the announcement in Korea, the stocks of U.S. weapons manufacturers plummeted. In just one day, the big five companies lost $10 billion, even though non-military stocks around the world either went up or stayed neutral. Peace is bad business for the weapons makers and their investors. BlackRock is the largest investment firm in the world. It controls trillions of dollars and has billions invested in weapons manufacturers. Join us in calling for BlackRock to divest from war, and redirect their investments towards the enrichment of our communities and conditions conducive to life.

I am still overwhelmed with joy. We have a real chance for peace in Korea when just months ago we were holding our breaths in fear of a nuclear war. While there’s much work to be done, let’s celebrate peace and the peacemakers, and let’s stop those who profit from war.

Holding hands and creating peace together,
Jodie Evans and the entire CODEPINK Team