Week 6 at the Saudi Arabian Consulate in Los Angeles 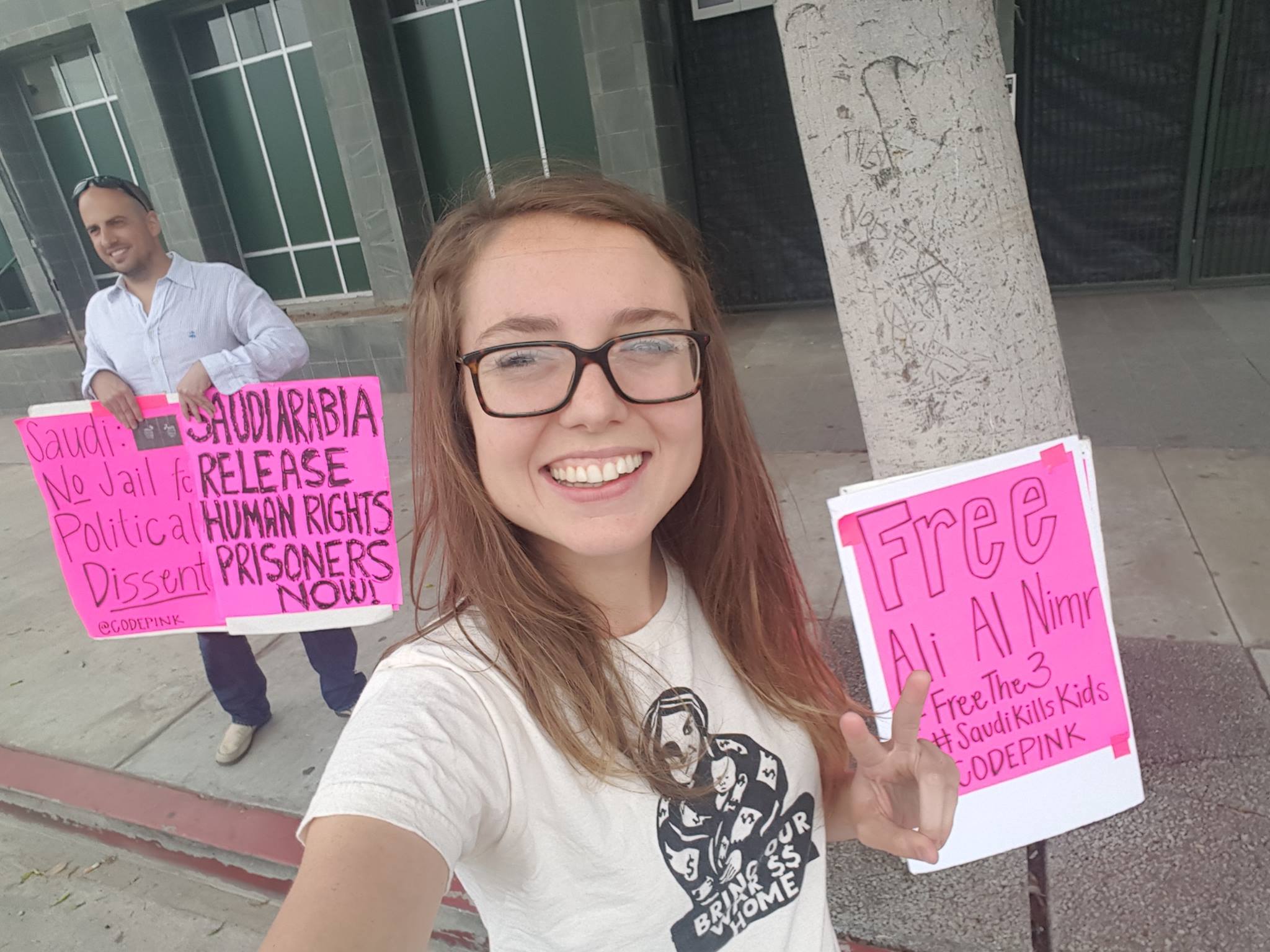 This marks the 6th week of our ongoing demonstration at the Saudi Arabian consulate on the westside of Los Angeles. This effort demonstrates opposition to the continued US-Saudi alliance despite the many human rights violations at work in Saudi Arabia and calls for the release of three young Saudi boys who face execution for their political dissent.

After some challenging interactions last week with consulate staff and two Saudi mothers walking by, I went into this week better equipped to engage in challenging conversation, only to remain a fairly non-interactive space for the hour we were present. The demonstration did receive a good amount of supportive honks and thumbs up from the traffic passing by but did not elicit conversation with any pedestrian traffic nor the Consulate staff itself.

I was joined in this action by Steve Haase, who said this was his first political demonstration! Steve is working on a tool called CareMob which would serve activists by extending the reach of a localized action through the generation of a digital action alerting users to join in real time. A heat map would be generated based on user activity demonstrating the actual reach of the action, linking up communities of support on a global scale. 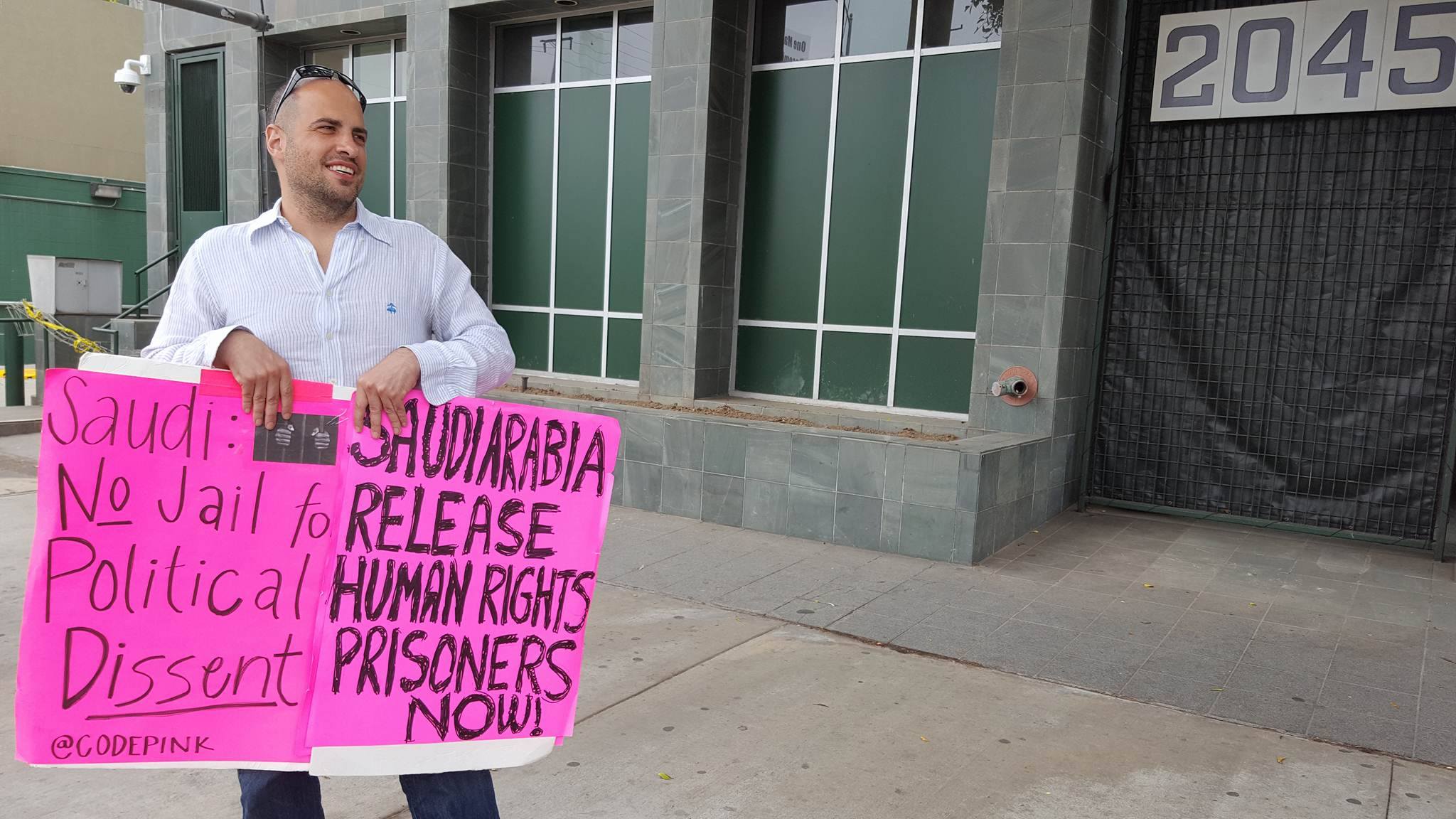 I am really energized by the possibilities presented through thoughtful application of technology in movement spaces and really glad to be working with Steve and CODEPINK to devise a unique strategy for bringing this tool into our work. Given the sprawling nature of both CODEPINK’s issue areas and activated activist community, I believe tools like this can help us more successfully leverage our resources, amplifying the effectiveness and impact of our message. Stay tuned for more information to come about CareMob!

The word is starting to get out there that these demonstrations are happening in Los Angeles on a weekly basis. Notices have appeared in the LA Progressive, as well as the KPFK community calendar, with more to come! With pressure mounting on the Obama administration to release the final 28 pages of the 9/11 report, along with legislation moving forward to halt the sale of cluster munitions to Saudi Arabia, who has used these illegal weapons of war on civilians in Yemen, it is my hope that the month of June turns out a new batch of supportive activists and we continue to inspire people to question and challenge this wrongfully normalized US alliance to Saudi Arabia. We are continuing to develop strategy and constantly thinking of ways to further education and awareness efforts around these issues and certainly welcome your input.

Chelsea is a political organizer and community strategist. She has trained thousands of student leaders in organizing, lobbying and advocacy skills for the betterment of public education. In 2014, Chelsea was awarded the Community Ally award from Northern Arizona Pride Association for her work advancing LGBT issues. A member of National Women's Political Caucus and a Vagina Warrior, Chelsea works towards gender equity and advocates on behalf of feminist leadership. She works with the rebel-rousers at Beautiful Trouble to coordinate a creative action training program and supports campaigns for peace and demilitarization with CODEPINK: Women for Peace. An advocate for the women's self-determination, Chelsea is passionate about intersectionality politics, capacity building, and creative engagement.