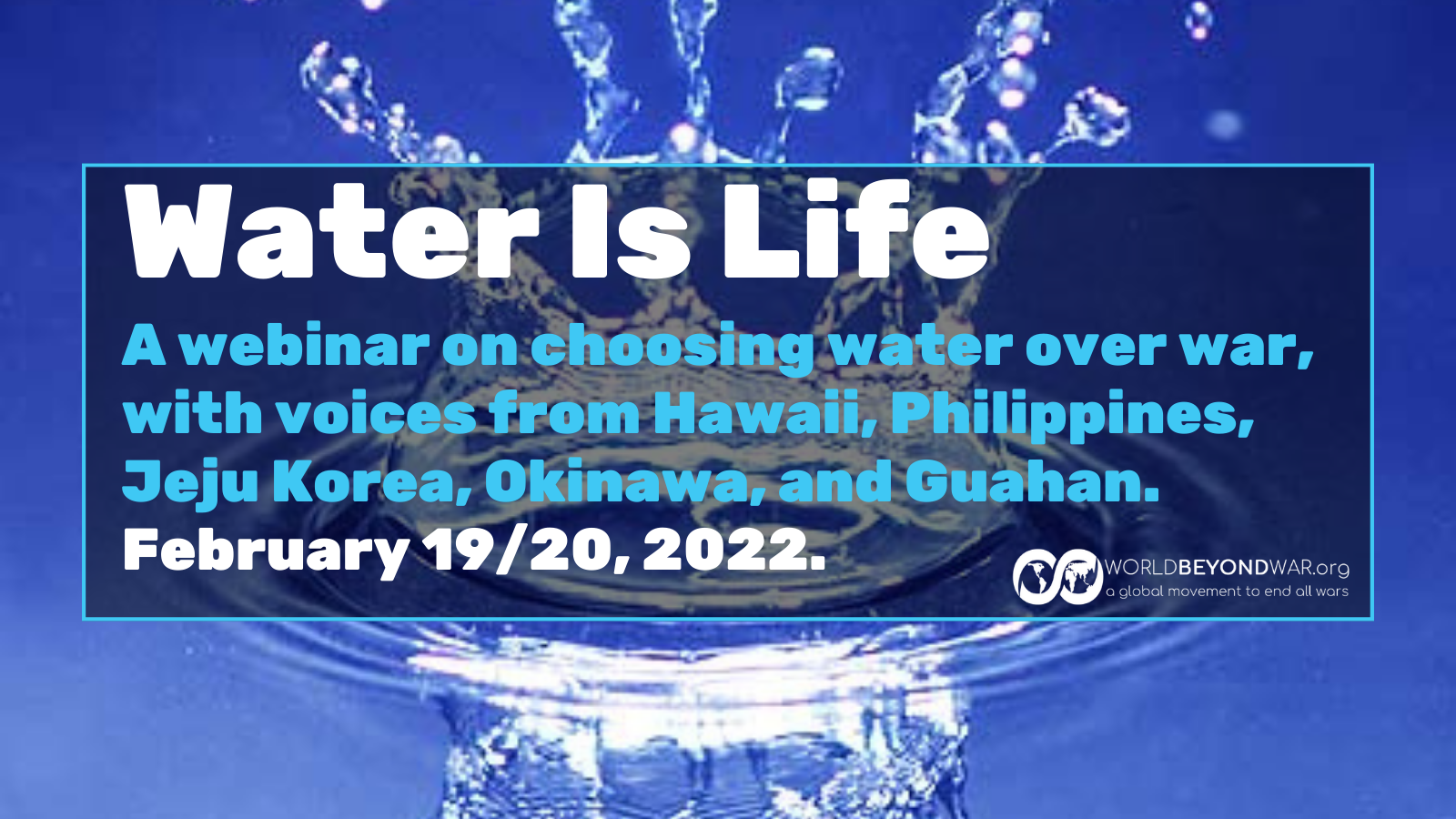 Water Is Life: A Webinar on Choosing Water Over War.

This free, public webinar will present the voices of those choosing water over war in Hawaii, Philippines, Jeju Korea, Okinawa, and Guahan. 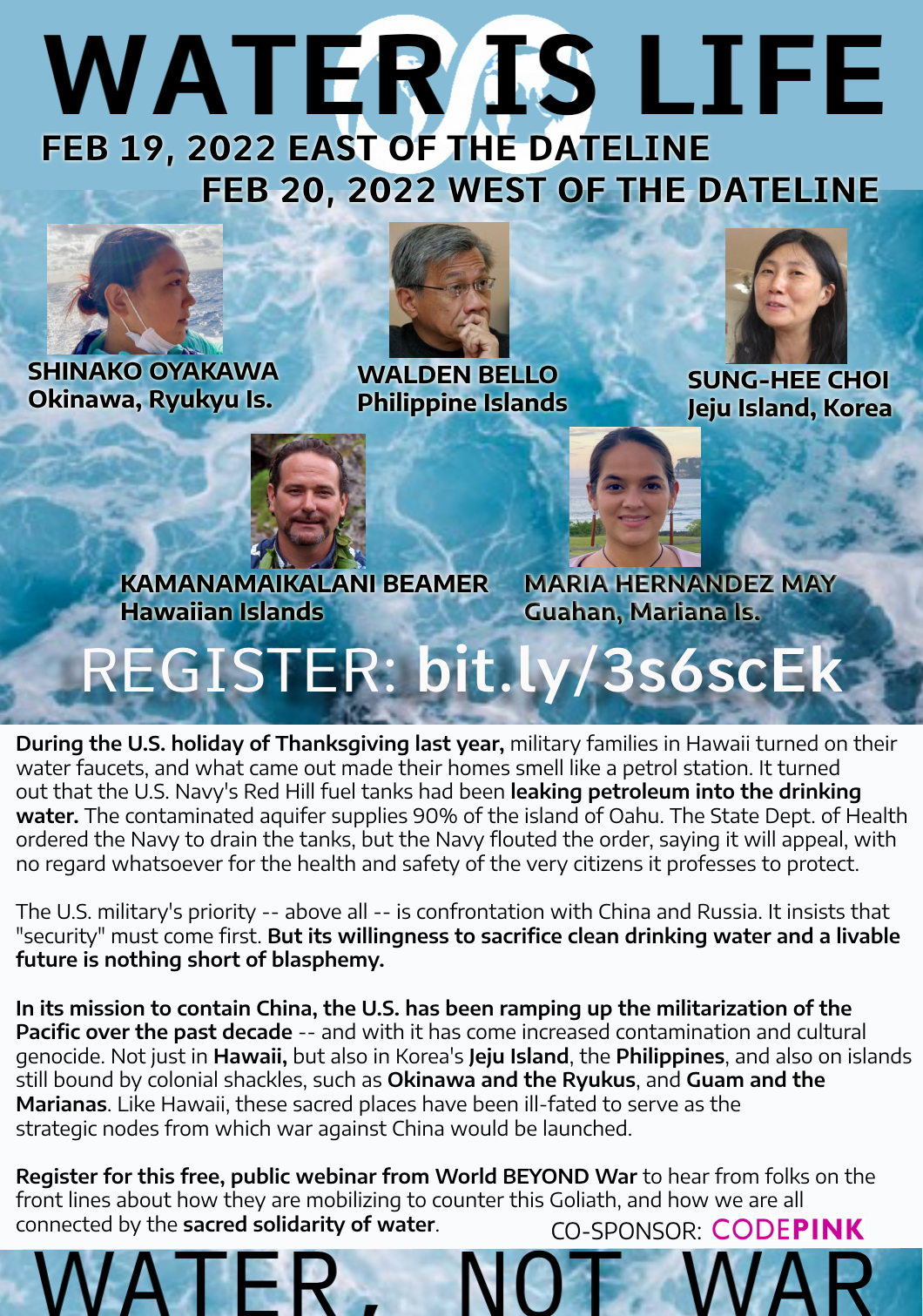 Speakers:
Walden Bello (Philippines)
Sung-hee Choi (Jeju Island)
Dr. Kamanamaikalani Beamer (Kanaka Maoli, Hawaii)
Shinako Oyakawa (Uchinaanchu/Okinawa)
Maria Hernandez (CHamoru, Guahan)
Moderator:
Koohan Paik-Mander (Pacific-American)
During the U.S. holiday of Thanksgiving last year, military families in Hawaii turned on their water faucets, and what came out made their homes smelled like a petrol station. It turned out that the U.S. Navy's Red Hill fuel tanks had been leaking petroleum into the drinking water. The contaminated aquifer supplies 90% of the island of Oahu. The State Dept. of Health ordered the Navy to drain the tanks, but the Navy flouted the order, saying it will appeal, with no regard whatsoever for the health and safety of the very citizens it professes to protect.
The U.S. military's priority -- above all -- is confrontation with China and Russia. It insists that "security" must come first. But its willingness to sacrifice clean drinking water and a livable future is nothing short of blasphemy.
In its mission to provoke China, the U.S. has been ramping up the militarization of the Pacific over the past decade -- and with it has come increased contamination and cultural genocide. Not just in Hawaii, but also in Korea's Jeju Island, the Philippines, and also on islands still bound by colonial shackles, such as Okinawa and the Ryukus, and Guam and the Marianas. Like Hawaii, these sacred places have been ill-fated to serve as the strategic nodes from which war against China would be launched.
Register for this free, public webinar to hear from folks on the front lines about how they are mobilizing to counter this Goliath, and how we are all connected by the sacred solidarity of water.

The event will include presentations, followed by Q&A, from these presenters:

Kamanamaikalani Beamer (Hawaii) is the Dana Naone Hall Chair in Hawaiian Studies, Literature, and the Environment at the University of Hawai‘i at Mānoa. He is the author of the award-winning No Mākou Ka Mana—Liberating the Nation and the forthcoming Islands and Cultures: How Pacific Islands Can Influence How We Understand the World (with Peter Vitousek and Te Maire Tau). He previously served as executive director of the Kohala Center, director of ‘Āina-Based Education at Kamehameha Schools, and director of Stanford University’s First Nations Futures Institute. He is a co-founder of ʻĀina Aloha Economic Futures.

Walden Flores Bello (Philippines) is a Filipino academic, environmentalist, and social worker who served as a member of the House of Representatives of the Philippines. He is an international adjunct professor at Binghamton University, professor of sociology and public administrationat the University of the Philippines Diliman, and executive director of regional policy think-tank Focus on the Global South. Bello is also the founder and chairperson of the left-wing alliance Laban ng Masa. (lit. Struggle of the Masses)

Sung-Hee Choi (Jeju, Korea) is a peace activist and one of the key organizers within the Jeju naval base resistance. She works tirelessly to demilitarize Jeju. Sung-Hee is a member of the board of advisors at the Global Network Against Weapons and Nuclear Power in Space. In 2011 she was imprisoned for her role in the Save Jeju effort.

Shinako Oyakawa (Okinawa) is a native Okinawan mother, activist, writer, co-director of Association of Comprehensive Studies for Independence of the Lew Chewans (ACSILs) and part time lecturer of Okinawa University. She also run after school kids programs in Naha. Shinako specializes in language revitalization, de-militarization and de-colonization of the Ryukyu islands. Shinako has attended UN Permanet Forum on Indigenous Issues (UNPFII) and Expert Mechanism on the Rights of Indigenous Peoples (EMRIP) to report colonized situation of the Ryukyu islands.

Maria Hernandez May (Guahan) is a CHamoru mother of three, environmental and cultural rights activist, and interim executive officer of indigenous CHamoru women-led non-profit Prutehi Litekyan: Save Ritidian (PLSR), which aligns with organizations throughout the Mariåna Islands to protect sacred native lands and advocate for the rightful return of ancestral lands. Maria is a 2022 Bertha Foundation Fellow investigating the relationships between politics and profit and the ways they contribute to the degradation of Guåhan’s (Guam) main fresh water aquifer and the contamination of the island’s coastal waters. Maria has a B.A. in Literature and M.S. in Business Administration, as well as a background in journalism, strategic communications and marketing.

Koohan Paik-Mander (Hawaii) is a Member of the Board of Directors of World BEYOND War. She is also a board member of the Global Network Against Weapons and Nuclear Power in Space, is part of the CODEPINK working group “China is Not Our Enemy,” and is on the advisory committee of the Global Just Transition project at Foreign Policy in Focus. She formerly served as campaign director of the Asia-Pacific program at the International Forum on Globalization. She is co-author of The Superferry Chronicles: Hawaii’s Uprising Against Militarism, Commercialism and the Desecration of the Earth, and has written on militarism in the Asia-Pacific for The Nation, The Progressive, Foreign Policy in Focus, and other publications.

-- "If we make no effort to change direction, we will end up where we are heading."
-- Chinese Proverb