Was it a Thumbs Up Sign or a Finger Gun Pointing at Us? 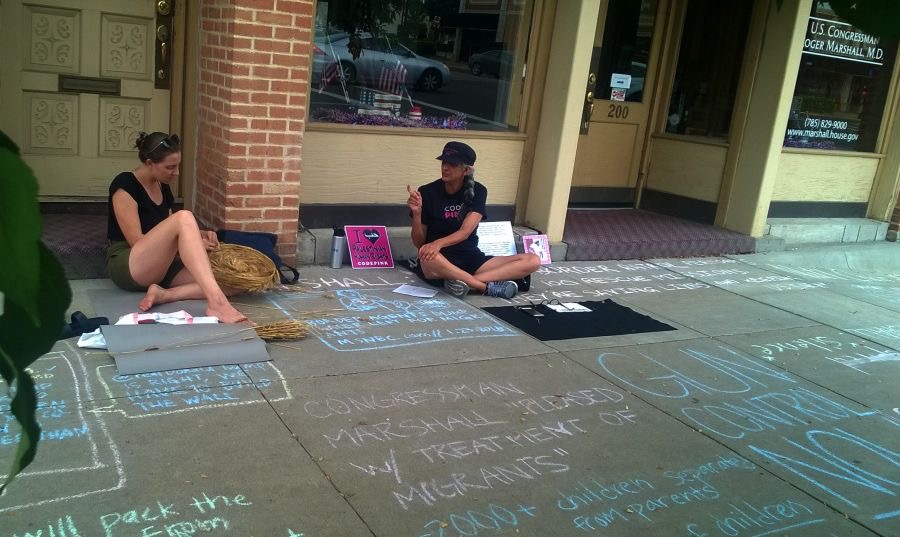 I have to say it doesn’t take very long for Kansas’ 1st district Rep. Roger Marshall and his staff to feel like as though they are the victims of their constituents’ concerns and not the other way around.

This time it started on Sunday, August 4 with some singing and chalking on Rep. Marshall’s sidewalk. The chalking included images as well as text such as

“Providing water to refugees is not a crime”

“‘I think the country is safer today than it was three years ago’ —Roger Marshall” (This was the weekend of the El Paso and Dayton shootings.)

A car drove by with people hanging their heads out and shouting obscenities and something about how “gun control won’t fix it.” And I thought to myself, they’re right. It’s not enough. The problem is much deeper and needs a cultural shift away from social, political and economic injustice as a whole.

The next day, I went as usual to SMoC, my “Sidewalk Museum of Congress” studio, and just as I was getting ready to lay down my work mat, out of the corner of my eye I see a figure inside Marshall’s office come toward the door. For a second I thought the staff person was coming to talk to me, but nothing happened. Did she come to lock the door? Maybe she was intimidated by our chalking from the previous day, and when she saw me coming, was further intimidated and quickly locked the door. But I’m not sure.

Five minutes later my fellow-artist friend Rena joined me, and as she was laying her stuff out, I told her what I thought just happened. After a few minutes ,we decided to go in and submit a few questions we had hammering at our brains for Marshall about the recent mass shootings.

Marshall’s office has two doors, one of which is behind where I usually sit. It has an old curled up paper sign on it telling visitors to use the other door, around the corner. That’s the door that Marshall used to make a quick getaway, a year ago August 8, when we were protesting some of the same stuff we are today and demanding to meet him.

We haven’t seen him since. (Well, he did have a town hall meeting in Salina on April 20, but the local community access TV posted on Facebook saying “This is Easter weekend, so the crowd wasn't large due to a lot of family activities around town this weekend.”)

Here Rena and I were again, our questions ready, my phone video on, and as we knocked on the door, Marshall’s staff person opened it and, seeing my phone, told me to please stop recording. I turned the phone off and we tried to voice our two questions for Marshall to a very defensive staff person as she typed them into her computer. Then we went outside to continue working.

I am a native of India, and you know it’s a small world in which government policies affect minimum wage workers, day laborers, farmers, peasants and their families halfway across the globe when your own Kansas member of Congress makes it into one of your native country’s newspapers. The Hindu reported on August 6, “US Congressman Roger Marshall said once again, Trump is doing exactly what he said he would do with China, now in regard to their currency. ‘US producers, workers and consumers have waited long enough for an administration who would stand up to China. I’m thankful it’s finally happening,’ he said.”

Recent severe weather and market uncertainty have impacted Kansas farmers. So on the day that the Hindu reported Marshall’s thankfulness for the tariffs, we decided to write an all-caps message at SMoC using some Kansas crops —soybean, wheat, corn and sorghum. Rena came up with a good one: TRUMP HARMS FARMS.

As we started to fill our palms with the grains to plant them on the concrete, I thought I saw someone nearby taking our picture. Then he walked by us and disappeared around the corner only to appear a little later with Marshall’s staff person, who was smiling and shaking his hand. The scene happened very fast, and only I saw it; Rena’s back was to them. Then the guy got into his car (oddly, with Florida plates) and drove off. Almost immediately, Rena got an email from Marshall’s office regarding our questions (see below.)

We sat back down to continue with what we were doing, and a few minutes later a pedestrian wearing sunglasses just walked right into me, stepping on our “TRUMP HARMS FARMS” slogan and saying, “I’m sorry, I’m hard of seeing.”

Seconds earlier, another guy in a passing car had blown his horn; Rena looked up at him and her eyes went dark. My back was to the street, so I was sitting there wondering what she’d seen when the guy in sunglasses crashed into me.

As we tried once again to finish the work we’d come there to do, Rena told me about the driver who blew the horn. Gesturing with her hand, she said that she couldn’t be sure if it was a thumbs-up sign he’d given her or a “finger gun”.

Fortunately, we had perched my phone on a little tree on the sidewalk to record the making of our grain slogan in time lapse. Rena patted the tree gently and exclaimed: “Thank you tree.” (Wehad not been thankful for our phone experience inside Marshall’s office the previous day.) You can see for yourself part of the strange sequence of events that interrupted our SMoC studio work that day. Coincidence? Paranoia? What just happened?

One of my questions for Marshall the previous day was whether he still believed himself when he’d said, “I think the country is safer today than it was three years ago,” and whether he was ready to take that statement back.

This is the response we got back from his office while we were planting TRUMP HARMS FARMS on Marshall’s sidewalk:

“Thank you for stopping by Congressman Roger Marshall's District Office in Salina, Kansas yesterday. This email is to advise that your opinion was filed with Congressman Marshall and our legislative team in Washington, D.C.”

My “opinion?” It was a question. Once again Roger the Dodger is living up to his reputation and ignoring his constituents’ concerns.

I shouldn’t have to go into my Congressman’s office with my video camera in hand to begin with. But let’s face it, I’m paranoid that in the shadow of whatever is left of our democracy, artists like Rena and me are an exposed sidewalk target.

SMoC diary to be continued…

Please go here to see a SMoC experience from October, 2018. By the way, the Republican campaign headquarters that featured in that incident is now a CBD shop lol!