For the WING team, the second week of October was full of powerful, creative direct action in Washington DC, fueled by calls for the World Bank and the International Monetary Fund to cease their predatory financial practices that lock in a future of fossil-fueled poverty and war. Chants for world financial leaders to “CANCEL THE DEBT” of Global South countries echoed down DC’s wide streets and marble façades for nearly a week straight. Alongside local Black liberation groups, national climate chapters, and the global Debt4Climate movement, CODEPINK’s War Is Not Green campaigners worked in solidarity to push for an equitable and resilient future in the face of petrocapitalism and imperialism. The coalition included ShutDownDC, Arm in Arm For Climate (Washington DC), Debt for Climate, Extinction Rebellion (Washington DC, Philadelphia, New York City), Democratic Socialists of America-Metro DC, GreenFaith, Justice is Global, and Public Citizen Trade Watch. Among calls for climate-change denier and World Bank president David Malpass to step down, the coalition also demands that these institutions end their investment in fossil fuels, cancel the debt they claim Global South countries owe, and pay climate reparations.

On Tuesday, WING organizers Olivia DiNucci and Nancy Mancias both disrupted the Debt Restructuring meeting at the IMF/World Bank annual gathering in Washington D.C. The two were ejected from the meeting after they unfurled a banner that read “IMF/World Bank: CANCEL ALL DEBTS. They continued to shout "cancel all debt, reparations now!" as they were escorted out of the meeting and building. The disruption and demand comes at a time when financial and climate crises are devastating and destroying vulnerable countries in the Global South. “The IMF and World Bank are loan sharks trapping countries into debt. We need localization and ecological sustainability for the people, planet, and peace,” states Nancy Mancias, CODEPINK campaign organizer. “We are calling on the IMF and World Bank to end its debt trap monetary practices which are causing countries to sink further down into economic crises. We are calling on them to cancel all debts.” 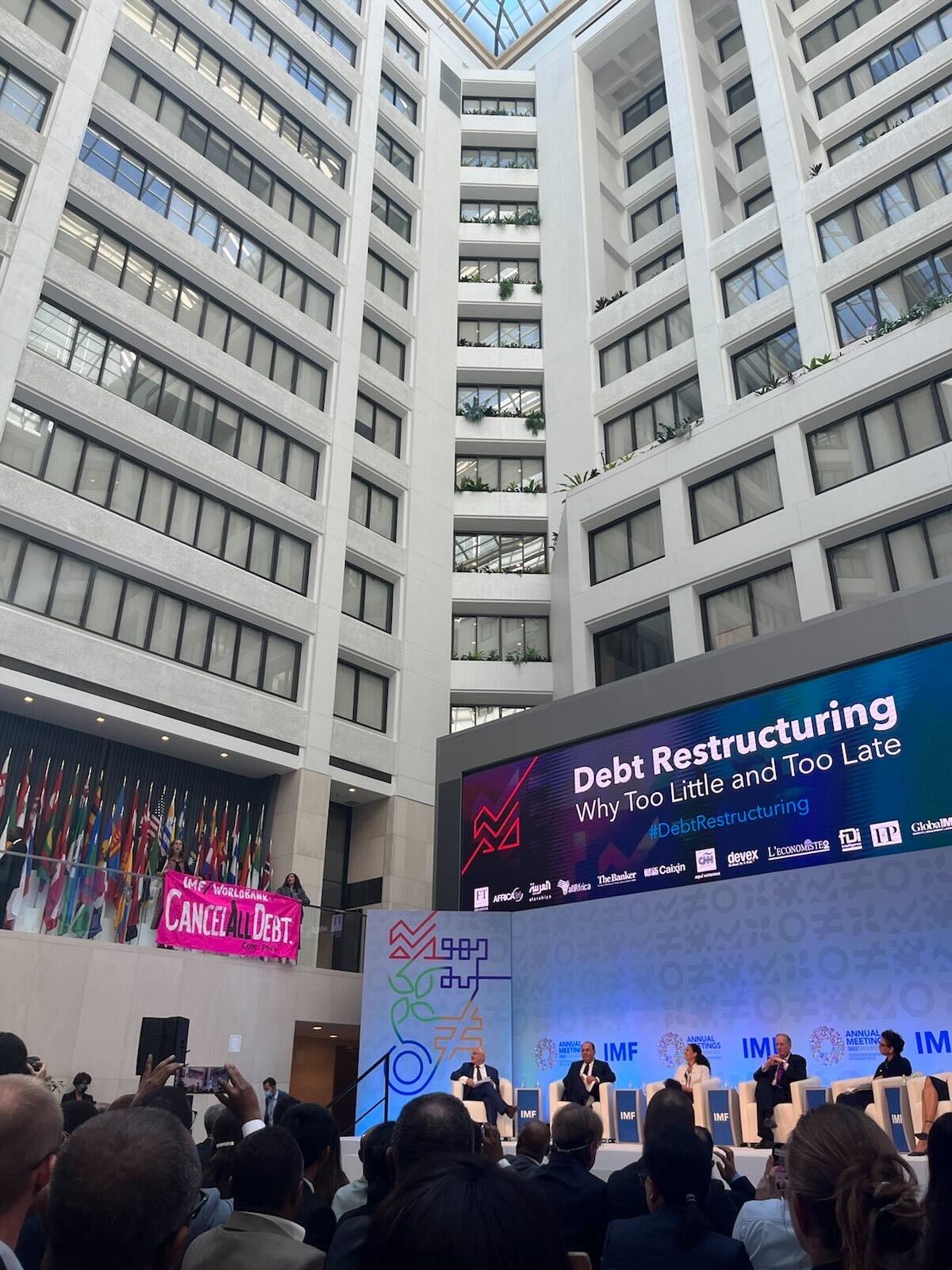 The solution to stabilizing the global economy is not going to be found in debt restructuring but rather from debt cancellation. The path to economic sovereignty for the Global South is not through the predatory loans offered by the IMF/World Bank, but instead through reparations of all wealth and resources that have been stolen from countries through colonization, illegal invasions, occupations, and extraction of oil, gas, and coal.

CODEPINK was back in action again on Wednesday, as WING Campaigner Olivia Dinucci and CODEPINK Co-Founder Medea Benjamin  disrupted the “AUSA Contemporary Military Forum: Partners in Army Climate Resilience.” From the stage, Olivia and Medea demanded to know from the panelists, “How can you have this conference?” Holding a banner that read: STOP MAKING A KILLING OFF OF KILLING, Olivia reminded the audience that the “US Pentagon is the biggest polluter in the world.” She called the conference a “greenwashing” event. Both Olivia and Medea were removed from the stage while trying to state the facts regarding the major role the U.S. military plays in climate change. 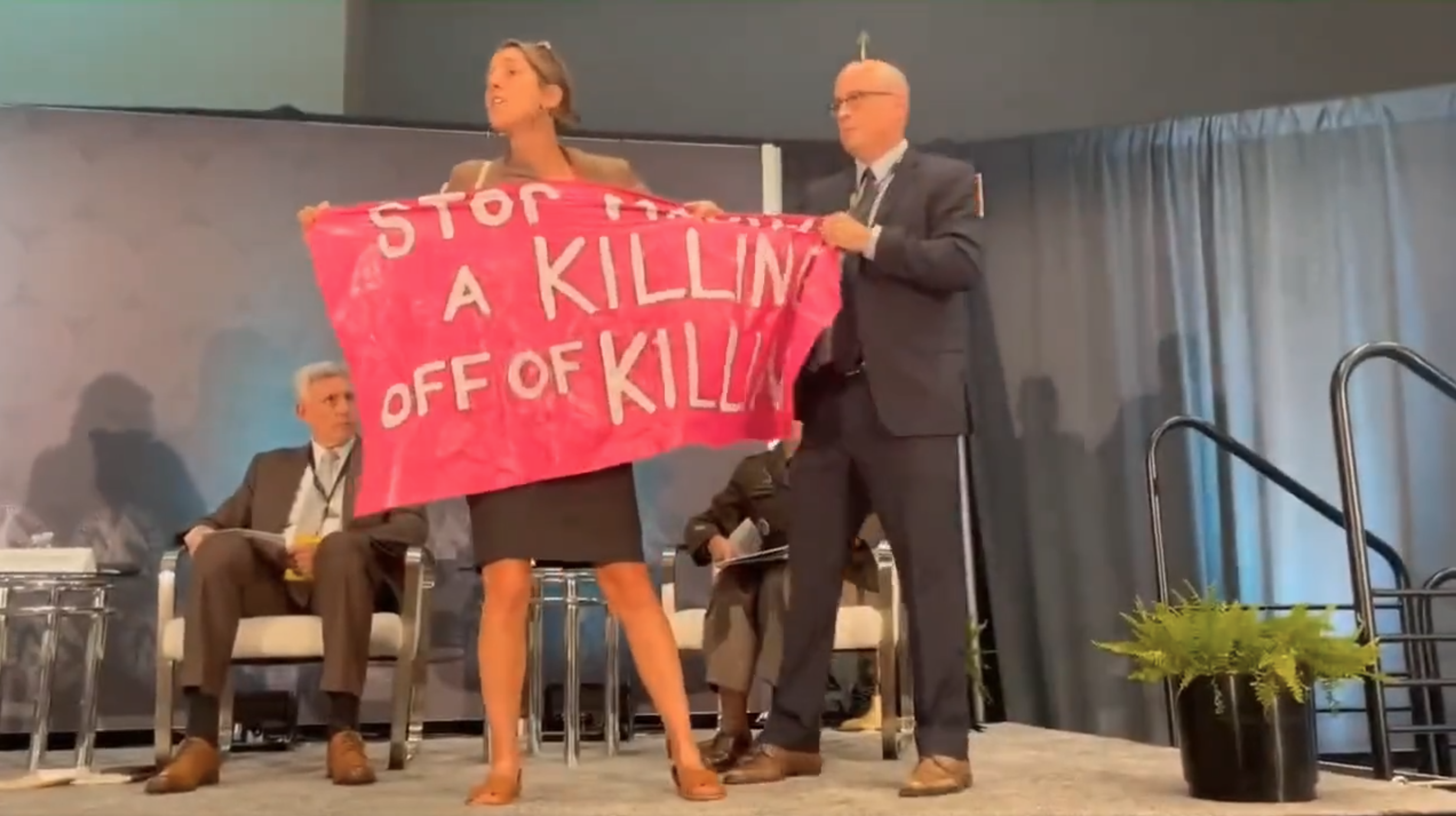 Again on Wednesday, over 100 bicycle protesters took to the streets to delay attendees of the annual G20 World Bank dinner. Cyclists with ShutdownDC and more than 10 allied groups protested the World Bank and IMF’s failing response to the climate crisis. Taking over the streets between the World Bank headquarters and the G20 dinner, bicycle activists bearing flags and banners called on World Bank/IMF leaders and G20 finance ministers to stop funding fossil fuels, cancel the debt they claim is owed by Global South countries, and pay those countries climate reparations. This took place amid controversy over World Bank President David Malpass’s climate change denial and calls from the Biden Administration for the

Bank to do more on the climate crisis. "The World Bank has poured $15 billion into fossil fuels since the Paris climate accord, and the IMF imposes a global economic order that favors corporate power over human needs. It's fitting that people on bicycles, on wheelchairs, on foot, and other forms of non-motorized transport are confronting them as they try to celebrate. It's a beautiful metaphor of people power versus fossil-fueled corporate power,” said Basav Sen, member of ShutDown DC and Arm in Arm DC. “The International Monetary Fund (IMF) and the World Bank prey on countries needing monetary loans. Attached to the loans are the harshest lending conditions, driving countries into a debt trap. The IMF and World Bank hijack and erode democracies and economic agendas. They put profit, before people and the planet. This is why CODEPINK stands in solidarity with all organizations protesting the IMF/World Bank. “We demand the IMF and World Bank decolonize their practice for the people, the planet, and peace,” said Melissa Garriga of CODEPINK.

“With the backdrop of compounding climate and ecological crisis, the IMF and World Bank continue to push policies of austerity on the countries of the Global South, costs borne by the Global South of a world system of expropriation that benefits fossil fuel corporations. We stand with those demanding debt cancellation, the end of fossil fuel finance, and climate reparations to those countries that have contributed the least to global emissions but bear the most immediate effects,” said the DSA International Committee. 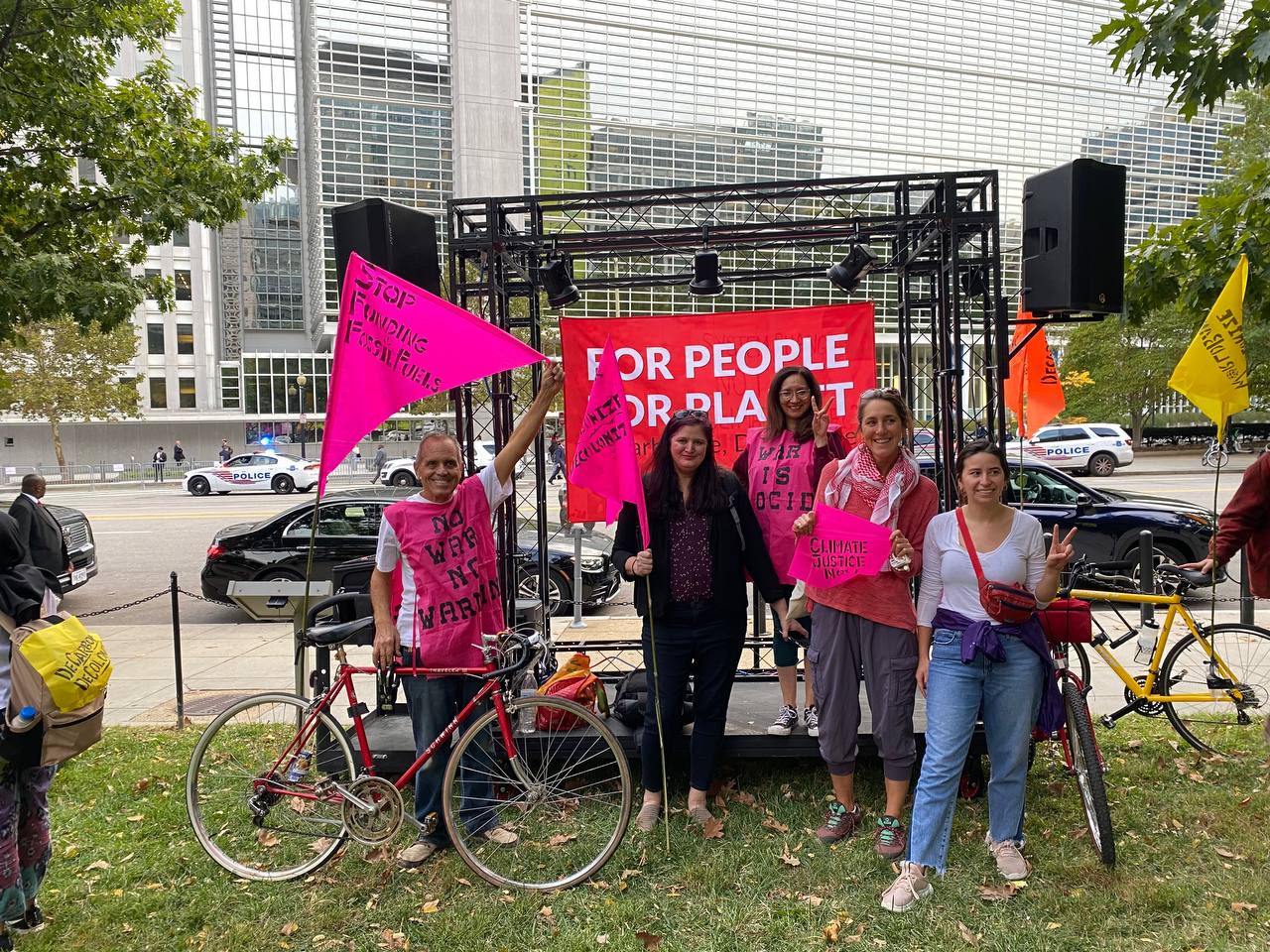 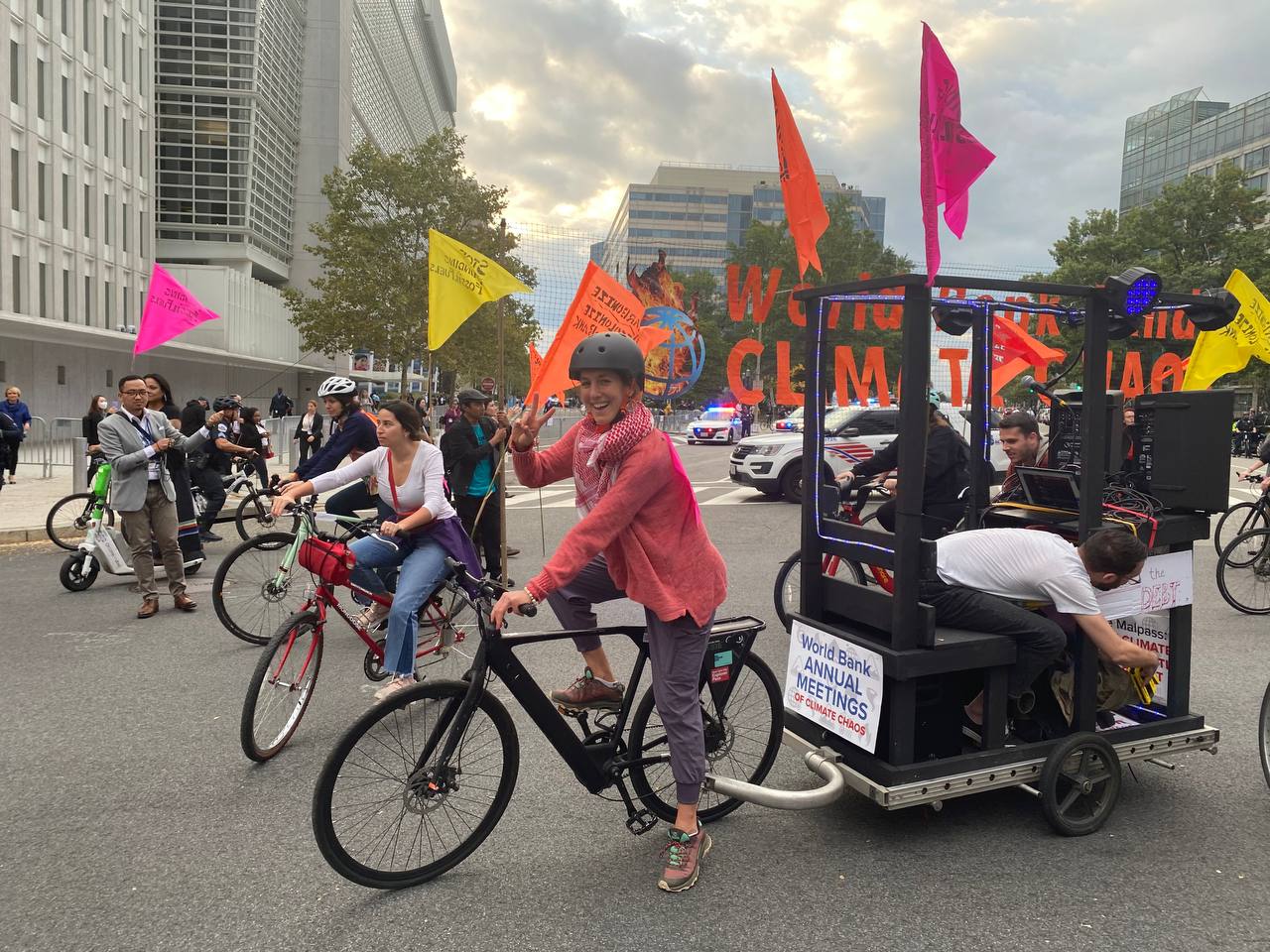 On Thursday, as the World Bank and IMF meetings came to a head, climate activists protested around the institutions’ headquarters to call on world leaders to stop funding fossil fuels, cancel Global South debt, and pay climate reparations. Olivia DiNucci and WING Coordinator Teddy Ogborn participated in civil disobedience, first blocking doors inside the IMF by gluing their hands to the floor, then blocking IMF delegates on the sidewalk outside the meetings. 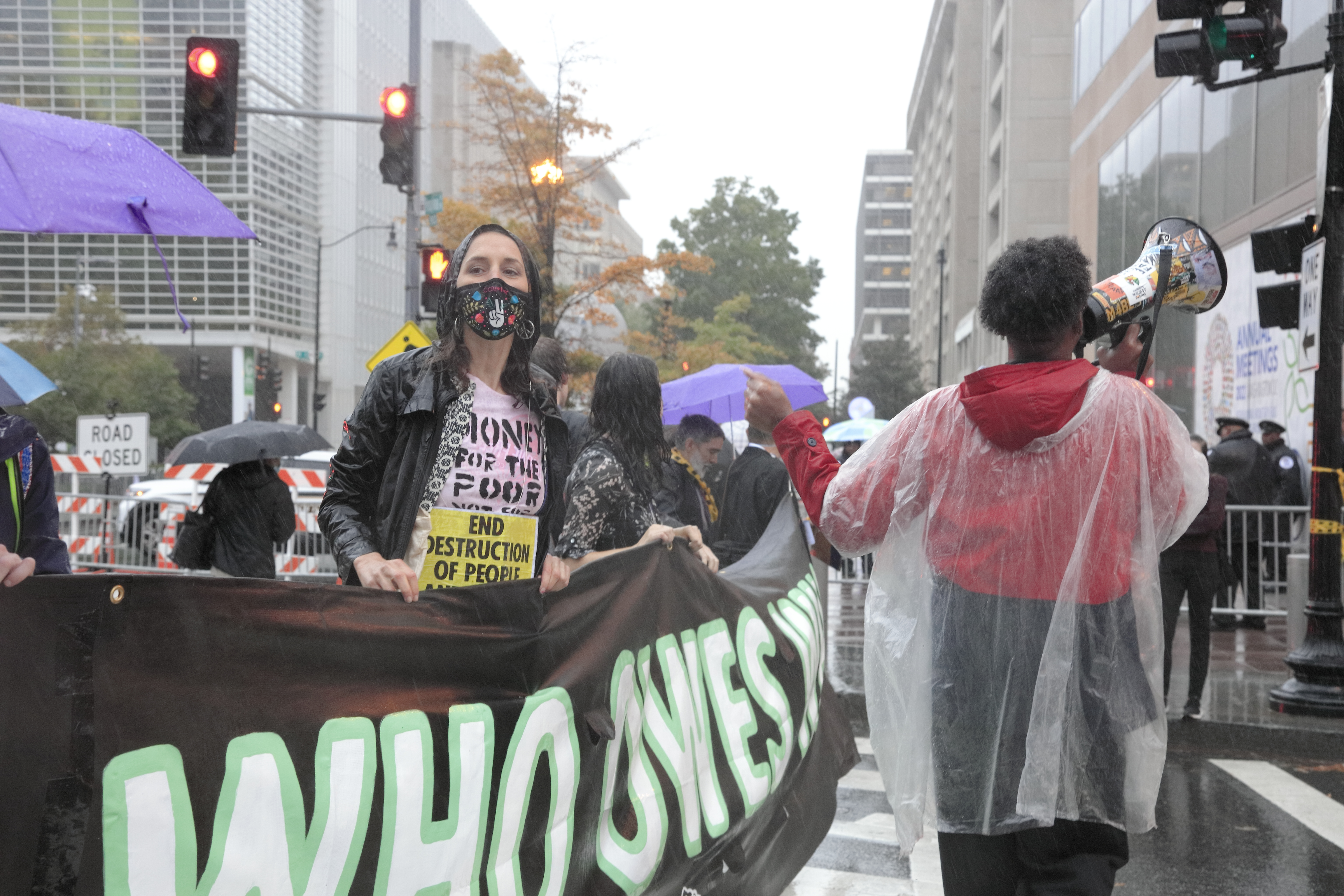 At 10am, activists held a mock trial putting the IMF and the World Bank on trial for their “crimes against life on earth.” Then at 1:45pm, at the same time as a press conference by G20 leaders, activists held a soccer-themed noise demonstration just outside to drown out the press conference. Banging on pots and pans, and making sound with noisemakers, air horns, megaphones, vuvuzelas, and more, activists pretended to hand out a “red card” (indicating a severe penalty in soccer) to World Bank president and climate denier David Malpass.

"We're tired of the World Bank defending their funding for fossil fuels,” said Andrew Nazdin, Director of Glasgow Actions Team. “We're tired of their false promises. So today we're drowning out the press conference to say that it's time for the Bank to stop funding fossil fuels and throw their full strength behind a just transition to clean energy.”

On Friday, as financial delegates attempted to enter the Daughters of the American Revolution building in DC, Teddy and Olivia were in action with the coalition again, using their bodies to block first the entrances to the building, then roads and sidewalks on either side of the building. One delegate from the Global South hinted privately that they “should be in this protest, too,” as the DAR discussions were slated to perpetuate fossil fuel commitments and the predatory restructuring of the money “owed” by Global South countries. 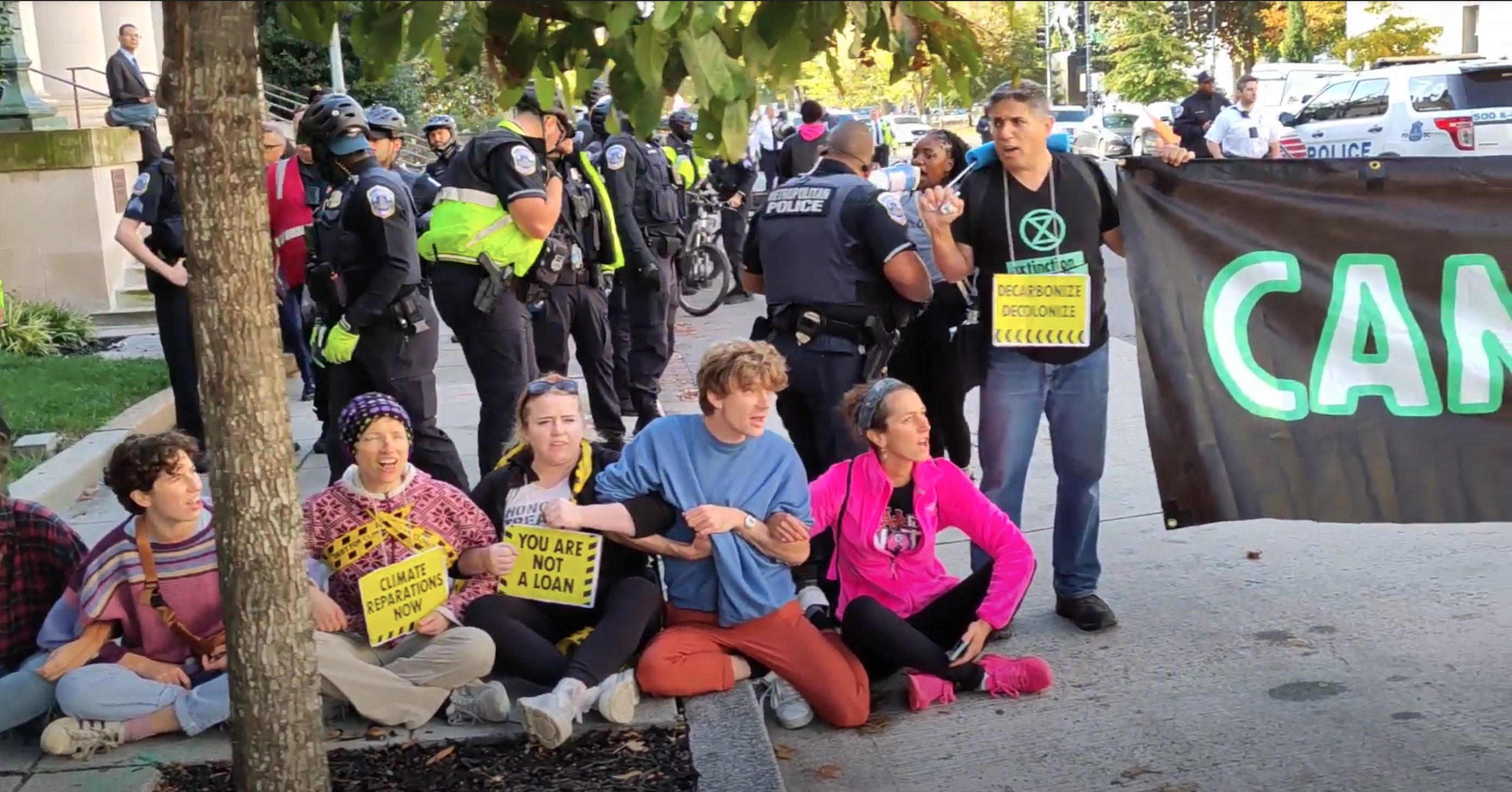 We were proud to stand, sit, and shout in solidarity with front-line communities fighting neocolonial financial schemes and fossil-fueled chaos. This fight is far from over, but we are emboldened by our fortified commitment to securing reparations and eliminating the sovereign debt of the Global South.