Former Attorney General John Ashcroft rewrote laws and created policies that gave new powers to the executive branch and reduced the authority of the judiciary and Congress. He and the Department of Justice ushered in the Patriot Act through the House and Senate, which was a public relations campaign to create unjust laws and policies for the Bush administration. Ashcroft defended the Patriot Act, saying it was needed to disrupt attacks on the United States. He dismissed critics of the Patriot Act, as "hysterics."

Ashcoft was almost held in contempt of Congress for refusing to provide copies of memos written in 2002 that Democratic senators said could have laid a legal foundation for abuses that occurred at Iraq’s Abu Ghraib prison and elsewhere. The documents would have shed light on Alberto Gonzales's and Michael Chertoff's positions on the use of torture during interrogations.

Members of Congress wrote to Ashcroft expressing concern over another memo of which the Federal Bureau of Investigation (“FBI”) detailed on how to collect information on Iraq war protestors.

When Ashcroft spoke at Cornell in November 2007 to defend the Patriot Act and Guantanamo, some audience members wore black hoods and turned their backs on him in protest. 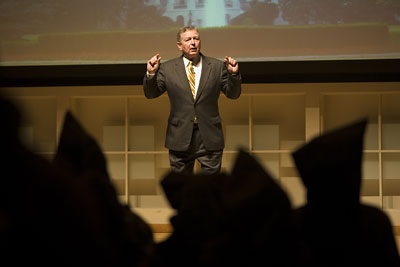 John Ashcroft oversaw the detention of thousands of Arabs and Muslims after Sept. 11.

His name has resurfaced in the news in a civil trial over whether he abused his role as Attorney General in enforcing the kidnapping and disappearance of so-called enemy combatants.

In Nov. 2004, he resigned from his position as Attorney General. Anthony Romero, the head of the American Civil Liberties Union, said "His legacy will show that he was one of the worst attorney generals in American history, with an outright hostility for civil liberties and overt disdain for critics."