Victims at Gunpoint: The Role of the Military in Disaster Relief 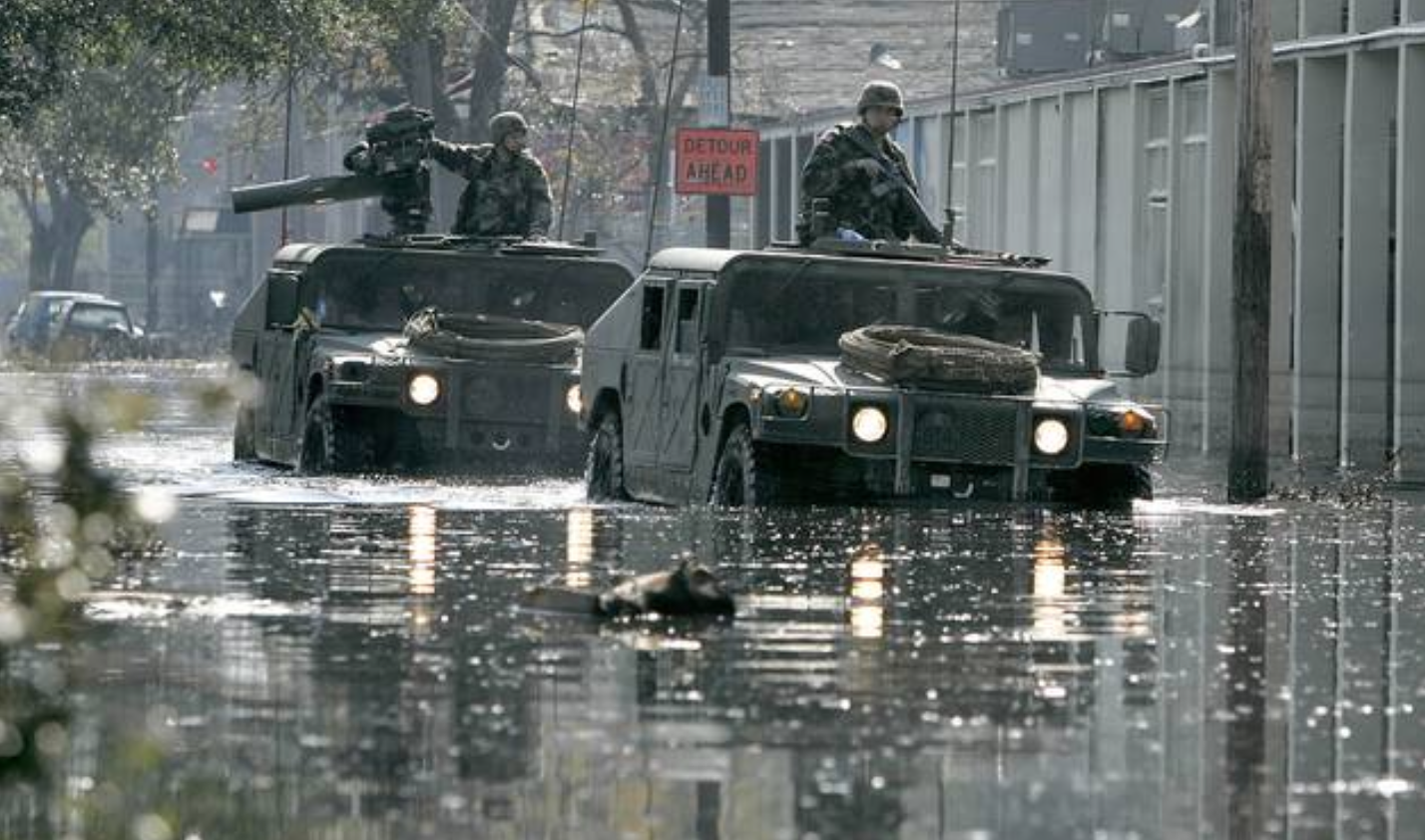 The road to recovery from the two “once in a lifetime” hurricanes that swept across US and Caribbean island coastlines within mere days of each other at the end of the summer of 2017 is littered not only with debris and destruction, but also with a litany of uncomfortable questions about the handling of these deadly storms.

One question, in particular, weighs heavily: What is the proper role of the United States military in natural disaster response?

The ubiquitous image of uniformed soldiers delivering supplies and stationing themselves at the scene of a disaster undoubtedly puts some minds at ease, inspiring confidence that relief has come and that a return to order and stability is just around the corner. But our country’s most vulnerable and marginalized populations, those who are hit the hardest by disasters that destroy property and leave billions of dollars of damage in their wake, may not feel so reassured. Those same populations are far too often treated as part of the threat to the very cities they call home.

When federal relief comes in the form of armed National Guard troops patrolling the storefronts of flooded streets, weapons trained on local residents in the name of “the maintenance of civil order,” the landscape of disaster recovery can look less like humanitarian aid and more like a military occupation.

The aftermath of Hurricane Katrina in 2005 was marked by a heavy atmosphere of tension, mistrust, and violence that yielded grave results for the poor and black communities of New Orleans even after the floodwaters subsided. Amid instances of white vigilante militias attacking African Americans with firearms and the media’s racially divided accounts of displaced residents “looting” versus “finding” necessary food and supplies,  New Orleans was also the site of a highly militarized federal relief effort.

This militarized response consisted of not only the National Guard but also the private security contractor known as Blackwater. Hired by the Department of Homeland Security, this armed force is the same company responsible for killing 17 Iraqi civilians in the infamous 2007 shooting spree in Baghdad’s Nisour Square.

Blackwater contractors and National Guard soldiers descended on the city with an aggressive attitude, intimidating the already frightened and traumatized black residents of New Orleans.

High-level military personnel had few reservations about speaking as if the city were a foreign warzone. Brigadier General Gary Jones, the commander of the Louisiana National Guard’s Joint Task Force notably stated, “This place is going to look like Little Somalia. We’re going to go out and take this city back. This will be a combat operation to get this city under control.” With orders from their commanding officers to confront looters and shoot to kill, soldiers and local police alike targeted the residents of New Orleans in a situation that was already marked by egregious racial profiling. This decision did not go wholly unopposed within the ranks, as was demonstrated by Lieutenant General Russel Honoré. At the scene of the Katrina military presence, Honoré famously ordered soldiers to lower their weapons and refrain from pointing them at civilians, a message he would go on to repeat in subsequent years in the face of police militarization and brutality against people of color.

As armed forces contended with one another on the subject of whether or not to hold the people of New Orleans at gunpoint, and private security contractors took up arms to protect the property of the wealthy, civilian volunteers such as the Common Ground Collective operated out of a mosque providing medical aid to the most vulnerable and marginalized members of the community. These street medics and their logistical support teams were treated by authorities as “insurgents” for their humanitarian work. The post-Katrina relief effort had fractured into two starkly different worlds—one that resembled an active military base camp patrolled by combat-ready troops, and one that represented the solidarity and compassion of a community, with a sign on its door that read, “No Weapons Allowed. Please Respect the Mosque.”

By comparison, one would be hard-pressed to find such lurid accounts of military activity in the wake of Hurricane Sandy, which struck the cities of New York and the northern suburbs and coastal boardwalks of New Jersey in 2012. National Guard troops were deployed for this disaster as for any other, but far from the aggressive counterinsurgency effort that characterized the military presence in New Orleans, this relief team drew criticism from some residents of New York and New Jersey for having too subdued a response. Critics expressed disappointment that the National Guard had been ordered to do “little more than” deliver and distribute supplies to survivors, preferring that the armed troops be utilized as security against looting. There is an important subtext to this criticism: Why involve the military at all if not for armed operations? Does the National Guard offer something more than the services offered by civilian organizations devoted solely to emergency response?

The answer lies primarily in resources. Military-grade structures and vehicles, built for resilience and highly versatile mobility respectively, have important roles to play in circumstances where infrastructure has been severely damaged by natural disaster. Aircraft, in particular, can be crucial assets for navigating compromised terrain, rescuing people from rooftops and trees, and delivering supplies and relief workers to otherwise impassable areas. These military resources played a significant role in the Hurricane Harvey relief effort. They are resources that unfortunately cannot be easily replicated by other emergency response organizations, federally-funded or otherwise.

For peace activists seeking to demilitarize the institution of disaster relief and prevent human rights violations at the hands of armed forces, the search for a solution is made far more complicated by this risk of sacrificing irreplaceable military assets.

With global climate change and the rapidly increasing size and severity of storms, natural disasters are of grave concern to environmentalists and peace activists alike. We all have a vested interest in halting and reversing the climate conditions that produce these deadly storms. We must try to ensure the safety of people struck by these disasters, while not allowing them to be terrorized by those who are hired to aid and protect them. These days, disaster relief relies heavily on military assets, and disentangling that reliance is not a simple matter. This is just one of the complex issues that environmental and anti-war activists will address in the 2017 World Beyond War conference from September 22nd to the 24th in Washington, DC.