Tonight our CODEPINK delegation in Cairo returned to Tahrir Square after the terrible events of this afternoon, when Mubarak's thugs busted up their peaceful protest with rocks, sticks and molotov cocktails. Hundreds have been wounded--their hands, legs, arms wrapped in bloody bandages. Despite the beatings, thousands of people are still camped out in the square--absolutely determined to stay there until Mubarak goes.

Despite the danger on the streets, we went to the square carrying with two big banners. One said "World Says Time To Go, Mubarak!" and the other said "Solidarity With Egyptian People" in both English and Arabic. When the people in the square saw us and discovered we were Americans, they erupted into cheers. "Thank you, thank you," they cried. "We love you." We were crying as well. It felt so good to help lift their spirits after such a terribly violent day.

I saw a friend who is a professor at the American University in Cairo. He had a big gash in his head. "Please, help us tell the world what is happening. Tell them how we were viciously attacked," he said. "Tell them we will die here if we have to, but we will NOT turn back."

I couldn't believe that after today's attacks, there were still women in the square who planned to spend the night. A group of young women ran up to us and started hugging and kissing us. "You don't know what your presence means to us," one of the students said. " Please tell Obama that we need him to do more to push Mubarak to go NOW, before more of us get killed." 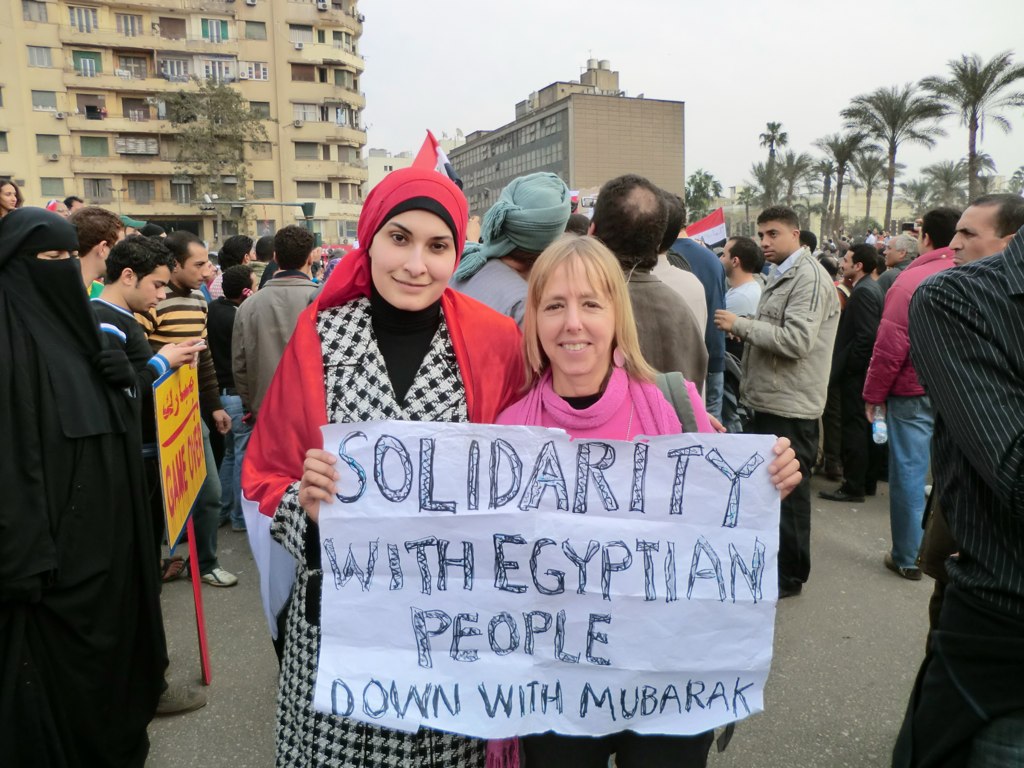 Tomorrow, a group of us will go to the U.S. Embassy with this message. We will sit outside the Embassy, despite the risks of being attacked by government thugs, and call on our government to immediately stop all aid to Mubarak's regime. Please join us by taking the same action back home.

The Egyptian people are writing a beautiful chapter in the history of nonviolence revolutions. Let's show them we are on their side.

Medea Benjamin is cofounder of Global Exchange and CODEPINK: Women for Peace.

See photos of the delegation here.

If you are a member of the press and wish to contact Medea in Egypt please see phone numbers in our press release here.

Sign onto CODEPINK's Call to the President to cut military aid to Mubarak here.