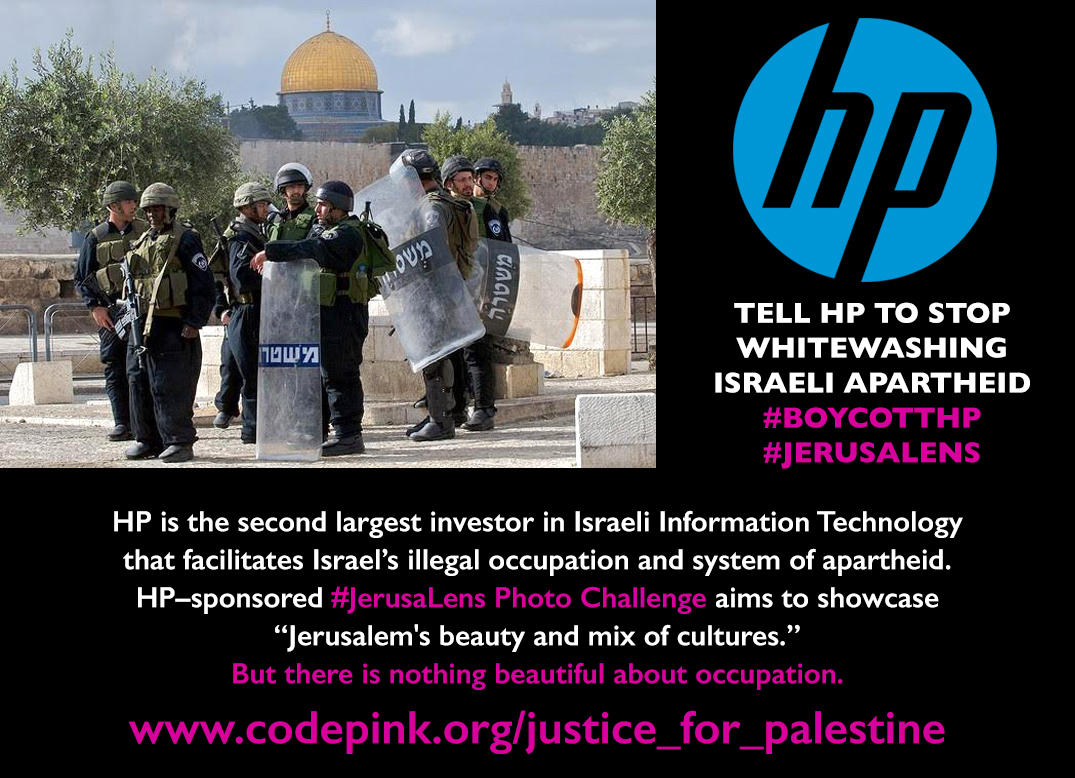 When: Today Thursday March 16 all day on social media

Hewlett-Packard (HP), the company that makes Israel’s apartheid ID cards is sponsoring the “JerusaLens Jerusalem Photo Challenge,” a contest that is part and parcel of the “Brand Israel” campaign to whitewash 50 years of military occupation and ongoing violation of Palestinian human rights in Jerusalem. While the photo contest seeks to show “Jerusalem's awe-inspiring beauty” and “mix of cultures and religions,” the truth is that there is nothing beautiful about Israeli apartheid and occupation.

Please join us to send a message to HP and #JerusaLens contest participants that occupation isn’t pretty and HP must end  its complicity with Israeli crimes violate Palestinian human rights and international law.

Use the hashtags #JerusaLens and #BoycottHP, and HP’s Twitter handle @HP

March 26-28 we will be in protesting the American Israel Public Affairs Committee (AIPAC) annual convention in Washington D.C. AIPAC lobbies shamelessly for unquestioned US financial and diplomatic support for Israel's brutal occupation of the West Bank, including East Jerusalem, and crippling siege on Gaza. AIPAC supports Israel’s settlement enterprise and want to increase US sanctions against Iran. Join us in D.C. for protests, teach-in’s, and to lobby for Israel to drop the charges against internationally recognized Palestinian human rights defender Issa Amro.

Issa Amro deserves to be free. Sign the petition to tell the UN to pressure Israel to drop the charges!

With your help we can achieve freedom and justice for Palestine!