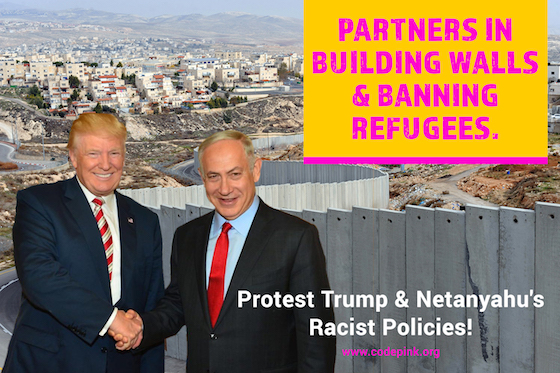 On Feb 15th, Israeli Prime Minister Benjamin Netanyahu and US President Donald Trump will meet in Washington DC. We can expect that this will be an exchange of WORST practices: Trump's wall and Muslim Ban mirror Israel's own religious and identity profiling and restrictive immigration. The next day, February 16, the US Senate will begin confirmation hearings for David Friedman to be US ambassador to Israel. Friedman has raised millions of dollars for illegal settlements, supports annexation of the West bank, and wants to move the US embassy to Jerusalem. Protests will take place on February 15 across the US!

Join All That's Left Collective, Coalition of Women for Peace, CODEPINK and others outside the US embassy in Tel Aviv to protest Trump, Netanyahu, and David Friedman.

The Trump administration’s alignment with Netanyahu is bad for everyone. Netanyahu and Trump's racist, islamophobic, pro-settlement agendas go hand in hand. The resistance to anti-refugee, anti-immigrant, anti-Muslim policies in the U.S. and in Israel must go hand in hand as well.

We must seize this opportunity to say loud and clear-- from US to Palestine: #BuildMovementsNotWalls #NoBanNoWalls