To the LGBT community: Now that you can join the military, please don't!

The peace group I co-founded, CODEPINK, has not only been protesting the wars in Iraq and Afghanistan, and the drone attacks in Pakistan, but we have been going to military recruiting stations, high schools and career fairs throughout the country encouraging our youth not to join the military. We talk to young people about the illegality of the wars under international law since we were not attacked by either Iraq or Afghanistan. We talk about how killing and maiming innocent civilians is morally wrong and creates new enemies, perpetuating the cycle of violence. We explain that the majority of Afghans and Iraqis want us out of their country and that these wars are not making us safer. We insist that our military should be used to defend us at home, not to invade other people's lands. 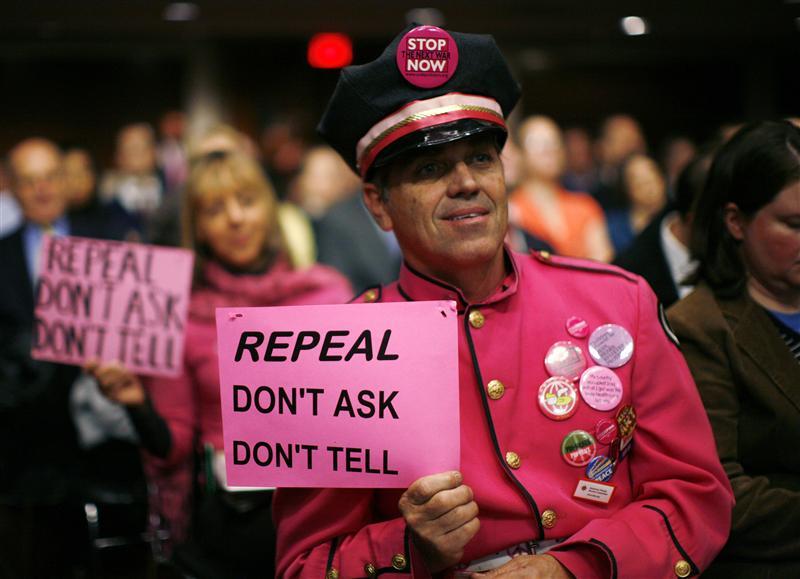 We know that the military is one of the only ways many young people can afford a college education these days and that the financial crisis severely limits this generation's career options. But we still encourage young men and women to look for other opportunities that don't involved killing or being killed in wars we shouldn't be fighting.

It might seem contradictory, then, that CODEPINK was an enthusiastic supporter of the rights for gays and lesbians to join and serve openly in the military. But within our organization, it was never even controversial--we stand up for the rights of all human beings. The decision to join the military or not should be determined by individual choice, not institutional discrimination.

We pressured our Congressional reps and attended every hearing with signs calling for the repeal of Don't Ask, Don't Tell. We joined protests at the White House and rallies in Congressional districts. And we were in the Senate on Saturday when the historic vote passed, hugging and kissing our friends who had struggled so hard for this victory.

We understand that allowing gay and lesbian soldiers to openly serve in the military is a crack in the armor of bigotry that will eventually open the way for LGBT people to marry and be guaranteed equality in the workplace. We understand this victory in the larger context of the march toward full human rights for this oppressed community. And who knows? Perhaps this victory will also serve to strengthen the military's respect for human rights abroad.

We also understand the potential for a powerful alliance between the LGBT and anti-war communities. We can work together to help young people--gay and straight--find careers that won't kill them, maim them, destroy them psychologically, or cause them to do harm to others. We can jointly reach out to those already in the military to speak out against the violations of the rights of peoples whose land we occupy. We can ask LGBT veterans to join groups like Veterans for Peace and Iraq Veterans Against the War. And we can work together to turn our military from an aggressive force to one that truly defends us here at home.

As we struggle to find a more civilized way to treat each other in this world, let us recognize the commonalities in the fight for LGBT rights and the fight to end war.

Medea Benjamin is co-founder of CODEPINK and Global Exchange.