This Year in #Accountability: 2011

This Year in #Accountability: 2011

2011 has certainly been a splashy pink year in exposing the truth about policy makers, decision makers and elected officials who have publicly failed, sometimes miserably, in the struggle for equality, civil liberties, accountability, peace and social justice. Below are some highlights from a memorable year. Almost everything was caught on camera!

Activists across the country, including CODEPINK spent the year confronting Bush, John Yoo, Condoleezza Rice, Donald Rumsfeld, Karl Rove, John Bolton, Henry Kissinger and others for war crimes. Meanwhile up north in Canada, a Senate Page, Brigette DePape, silently stood up on the floor of the Senate chamber with a "Stop Harper" sign. Stephen Harper is the current Prime Minister of Canada and the leader of the Conservative Party. Harper has been leading Canada with a conservative agenda since 2006. Activists oppose Harper's administration because of its "alienation of university students, expanding prisons, cutting art funds and then redirecting it to military spending." 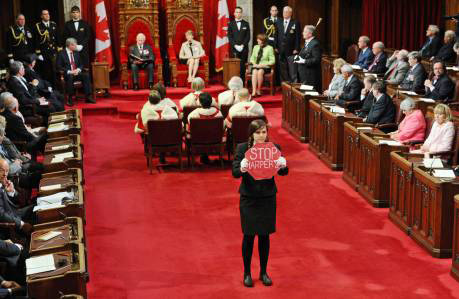 As President Obama spoke at the Facebook headquarters in Palo Alto, California, CODEPINK activists created a Facebook campaign telling the president to 'Update Your War Status' referring to the U.S. military intervention in Libya and the continued military spending in Iraq and Afghanistan.

Barack Obama, during his campaign, promised to close Guantanamo and end torture. American voters have recognized the costs of the wars in Iraq, Afghanistan, Pakistan, Yemen and Libya–lives lost, international cooperation thwarted, and tax dollars squandered. The Obama administration has authorized unmanned drone attacks in Pakistan, in direct contravention of international law, and an attack in Afghanistan that resulted in the deaths of many civilians. Watch the CODEPINK intervention team engage President Obama outside the White House.

Former Minnesota Governor and GOP Presidential hopeful Tim Pawlenty visited San Francisco where he was "glittered" by CODEPINK activists. If elected, the former presidential candidate said he would reinstate Don't Ask, Don't Tell (the ban on openly-gay service). As Governor of Minnesota he vetoed a bill that would have allowed surviving partners of same-sex couples the right to decide what to do with their loved one's deceased body, because he believes in "traditional marriage".

Former Vice President Dick Cheney’s book “In My Time” hit the shelves at local bookstores earlier this year. At the kick off of Cheney’s media book tour, CODEPINK cofounder Medea Benjamin inspired activists to take action in moving Cheney’s book to the Crime section in bookstores in her 10 reasons to move Cheney’s book. 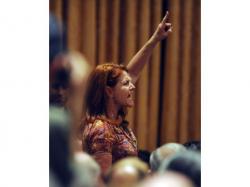 Using social media to its full advantage to protest Cheney’s new book, activists had created a Twitter handle (@fakecheney) and hashtag #InMyTime, joined a Facebook group, taken pictures of moving books for a Flicker slideshow, filmed a YouTube video and downloaded, printed and inserted “Doin Time” bookmarks. Even actor Alec Baldwin got in on the action and tweeted how he felt about Cheney’s new book. If anything, Cheney’s resurrection has inspired creative action and opened old wounds.

Dick Cheney managed to stay in the news for most of the year defending torture and insisting the intelligence to invade Iraq was correct. His visit to left-leaning San Francisco didn’t go unnoticed. Activists with CODEPINK, World Can’t Wait, National Accountability Network, PDA and OccupySF held a protest inside and outside the Palace Hotel where Cheney was addressing a luncheon full of investors. Read more about Cynthia Papermaster confronting Dick Cheney inside the investor’s conference.

There's been a wave of political disruptions taking the 1% by storm! Well-known figures such as Dick Cheney, Condoleezza Rice and former Goldman Sachs CEO Henry Paulson had to take refuge and others like Karl Rove simply “lost his mind”. The 99% has moved its persistency against social and economic inequality and greed from outside the urban camps to inside convention rooms and university auditoriums, flexing their new voices for real change and using the people's microphone: "Mic Check!".

After years of CODEPINK disruptions, it’s refreshing to see the Occupy Wall Street Movement take the reins of a tactic that requires nerves of steel to address those who should not be feted in a country with high unemployment, high foreclosures, expensive health insurance, bloated military budget, expensive tuition and skyrocketing homeless communities. Can't wait to see what's in store for 2012!