This time, we can get the votes 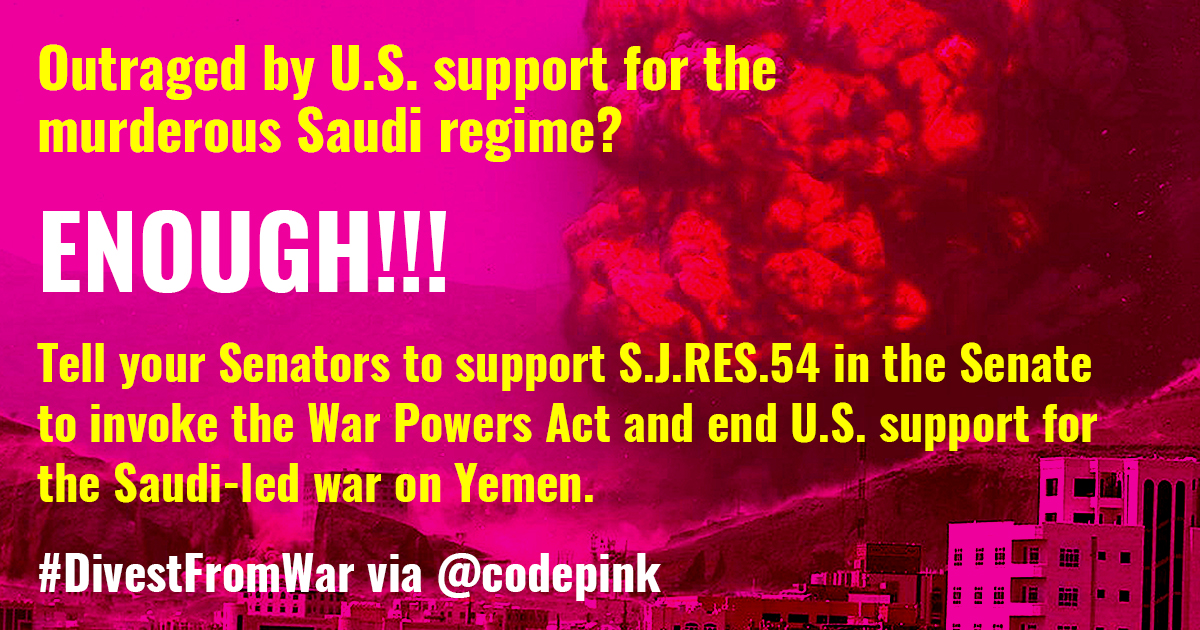 Remember when Trump proclaimed that he could “stand in the middle of Fifth Avenue and shoot somebody” without losing votes? Apparently, Trump thinks this kind of murder is fine because he wants Mohammed bin Salman to get away with the brutal murder of Washington Post journalist Jamal Khashoggi, despite the conclusions of a CIA investigation.

The President may not be willing to hold Saudi Arabia accountable, but Bernie Sanders is taking action tomorrow in the Senate, and we have a real chance to win this time. Call and email your Senators and tell them to vote YES on S.J.Res.54 to end U.S. support for the Saudi war in Yemen.

We knew from the moment Jamal Khashoggi went missing that the action had been ordered by MbS himself, as the Crown Prince is the absolute ruler. We also know that MbS is responsible for the worst humanitarian catastrophe on earth: the devastation in Yemen. Figures just released say that 85,000 Yemeni children under the five have died from acute malnutrition.

After the CIA concluded it was MbS himself who ordered the murder of Jamal Khashoggi, Donald Trump shrugged it off--just like he shows no concern for the death of Yemeni children. He brashly admits that the interests of U.S. weapons manufacturers come first.

Thankfully, we have champions in Congress who aren’t giving up. This time - with your help - we believe we can get the necessary votes to stop US support for the brutal war in Yemen. Call and email your Senators now. Tell them to vote YES on the Sanders-Murphy-Lee Resolution 54 to end U.S. support for the Saudi war in Yemen.

We have been working on this issue for years. Last year, when this same bill went to the floor, we came close to winning the vote. Now, with more support, Sanders has reintroduced the bill and we have a real chance to win. Yemen can’t wait, so take action now!

For the children of Yemen,
Medea and the entire CODEPINK team