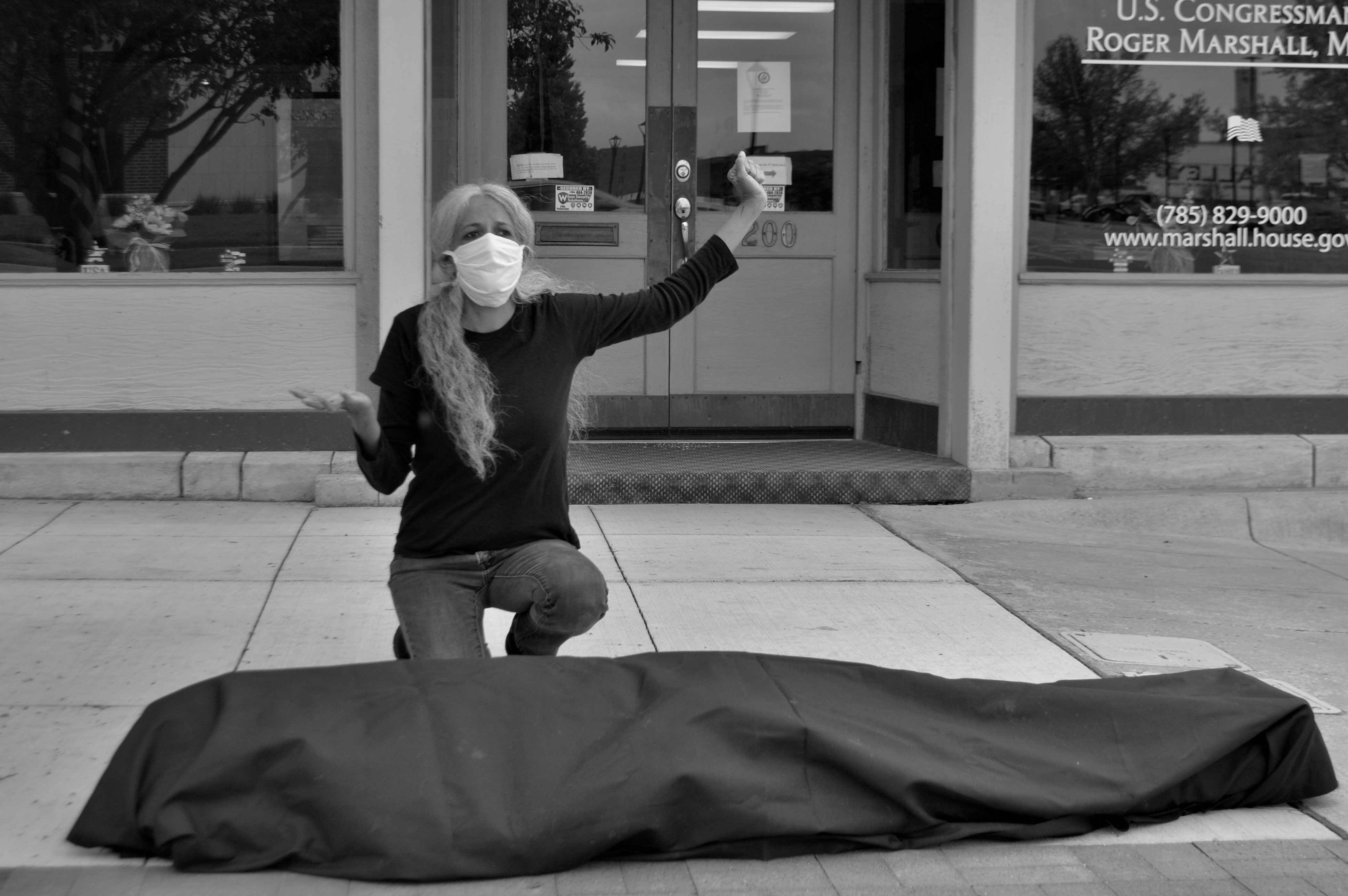 According to David Paul Kuhn, author of The Hardhat Riot: Nixon, New York City and the Dawn of the White Working-Class Revolution, “If there’s an era when the tribalization of the trump era began, it’s this time,” and that “between Kent State and the hardhat riot you have the best microcosm that there is of the beginning of the polarization that haunts America today.”

Fifty years later, in pandemic-time, when more than 70,000 Americans officially have died so far, (the actual number is much, much higher) our politicians are too busy playing status quo politics in D.C. and to varying degrees all across the 50 states. But within the midst of these status quo shenanigans one thing is as clear as this vast, contrail-free Kansas heartland sky above the Sidewalk of Museum of Congress (SMoC) protest today: the core of the tragedy is the same, only the surface layers have changed.

The tragedy that was the Kent State massacre and that was captured in the iconic photo of Mary Ann Vecchio kneeling over the body of Jeffrey Miller—a 20-year-old man whose anti-war voice had just been silenced by a shot through his protesting mouth by superpower state machinery—speaks to us in ways that only those paying attention can hear.

The Guardian points out that the atrocity of Kent State was bookended by two other atrocities: the South Carolina State College massacre of 1968 and the Jackson State College massacre ten days after Kent State. Together, those two state-sanctioned shootings killed five young Black men — Samuel Hammond Jr., Henry Smith, Delano Middleton, Phillip Lafayette Gibbs, and James Earl Green, and wounded 39 other Black students. “Kent State is a story that people know, people can learn from, whereas Orangeburg and Jackson, because they happened on black college campuses, are stories that go untold,” said Bakari Sellers, son of student rights leader Cleveland Sellers who was convicted of rioting and was “the only person to go to prison over what became known as the Orangeburg Massacre.”

Today, the silencing of justice and cries for accountability continues. Only the circumstances have changed. And through the fifty years, we can hear echoes of Crosby, Stills, and Nash:

Left strugglin’ on their own

This summer I hear the silencin’

A thousand dead in Ohio

Gotta get down to it

The government’s letting us down

Should have been gone long ago

What if you knew a Latina,

Found her dead on the ground?

How can you lie when you know?

Gotta get down to it

Administration’s mowing us down

Shoulda been gone long ago

If you saw a Black Man

Lyin’ dead on the ground?

How can you lie when you know?

Left strugglin’ on their own

This fall I’ll hear the silencin’

More dead in Michigan (How many?)

More dead in Illinois (How many more?)

More dead in Delaware (Why?)

More dead in Arkansas (No!)

More dead in Maryland (No more!)

More dead in Tennessee (No more!)