This may be the chance to stop him 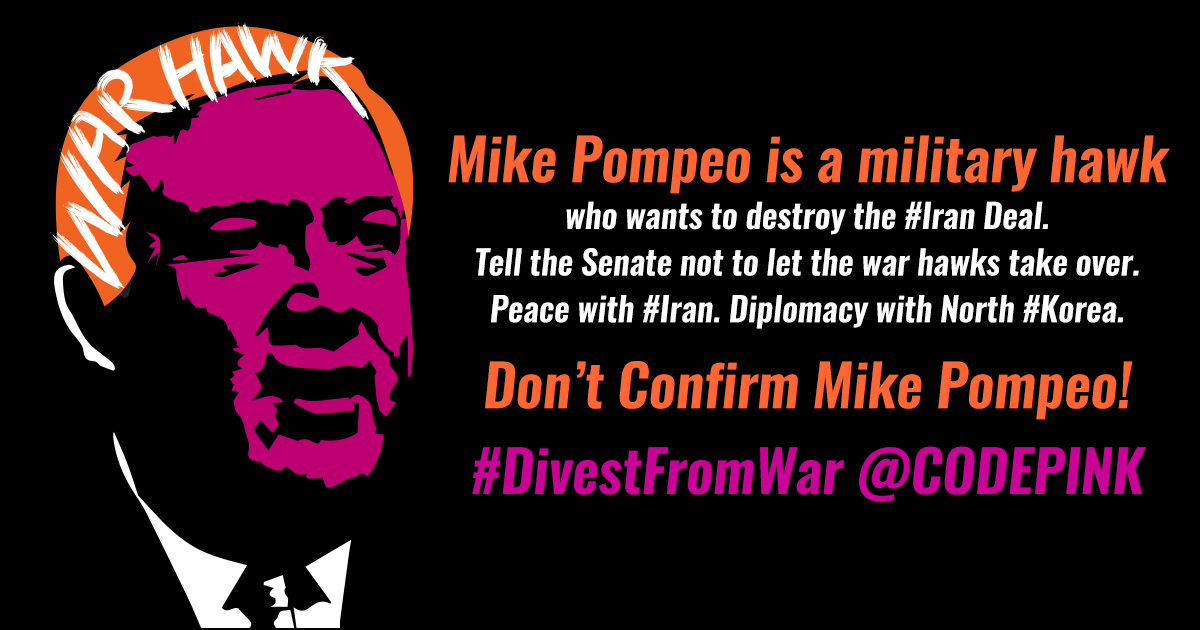 We are heading into real danger, with the horrific chemical attack in Syria and military responses that will lead to more death and destruction. From Syria to Yemen, we need ceasefires, not more war. In Palestine, we need an end to the Israeli occupation. In Iran and North Korea, we need skilled diplomacy. Instead, the Trump administration is filling the White House with war-hawks: John Bolton as National Security Advisor and Mike Pompeo as Secretary of State. John Bolton did not need Senate confirmation, but Mike Pompeo does. His confirmation hearing in the Senate Foreign Relations Committee will take place on Thursday.

The vote is expected to be tight and we have a real chance to stop him. That is why we need you to send this letter to the members of the Senate Foreign Relations Committee. Tell them to vote No on Pompeo.

Pompeo advocates military intervention and regime change in North Korea, and supports ongoing unauthorized conflicts like the Saudi-led war on Yemen. When the Iran nuclear deal was signed, Pompeo blasted it as being “not foreign policy, it’s surrender.” He has since compared the Tehran government to ISIS and has promised to do all he can to destroy the nuclear deal. As Secretary of State, he may now have the opportunity.

Not only does Pompeo advocate for war, but he also cozies up to hate groups and Islamophobes. Pompeo arranged a congressional briefing for Act for America and accepted an award from the group. This is a group that promotes “anti-Sharia” state laws and advocates against new mosques being built.

Pompeo will be coming into the Trump administration at the same time as John Bolton, a man who still says the Iraq war was a good idea and is hell-bent on confronting Iran and North Korea. Bolton is closely associated with Pamela Geller, who had a series of ads placed on busses portraying Palestinian children as terrorists. Together, Bolton and Pompeo threaten to drag us into new, even more dangerous wars. Since Bolton’s appointment did not require a vote, a vote for Pompeo is also a vote for Bolton and a vote for war. Act now to tell the Senate Foreign Relations Committee to oppose Pompeo.

With an urgent call for No More War,
Medea Benjamin and the entire CODEPINK team