The Iraq Uprising: An Interview with Two Iraqi Activists 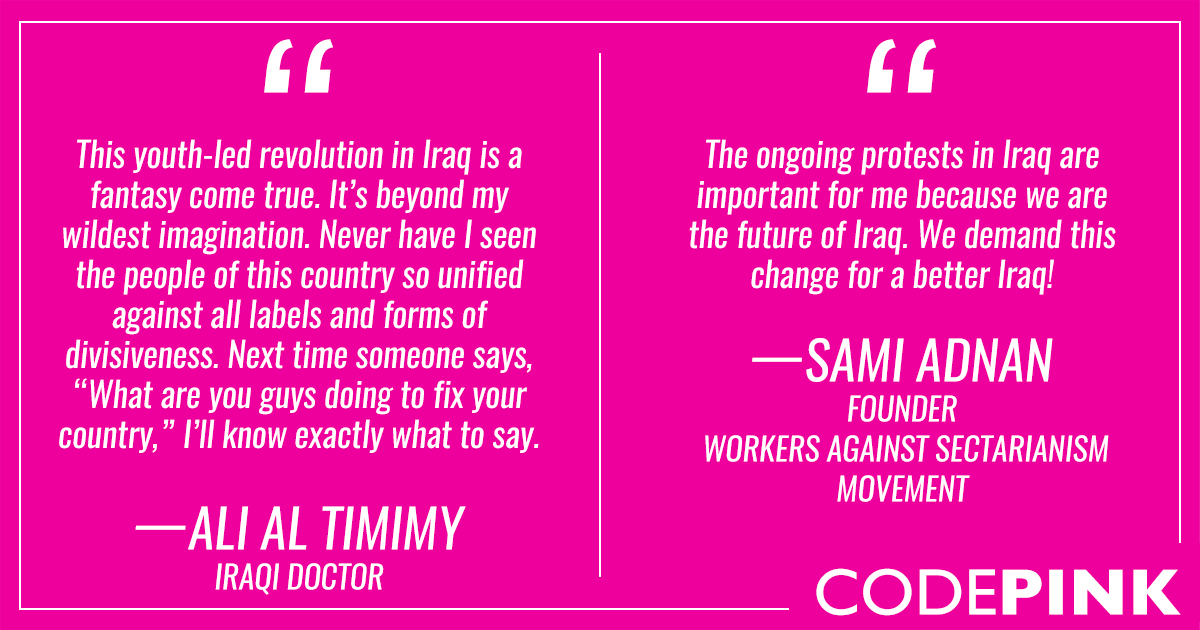 CODEPINK’s Enas AlSaffadi recently interviewed Ali Al Timimy, a doctor and protestor, and Sami Adnan, a leftist political activist and the founder of the Workers Against Sectarianism movement, who has been working in the field since 2010. Both discussed the recent protests in Iraq during this interview.

Enas: What are the main reasons for the uprising in Iraq?

The main reason for the uprising was the crisis of the neo-liberal sectarian system chosen by America for Iraq. This system caused the emergence of many militias, a religious dictatorship, and corruption that became deeply rooted in state institutions. Along with this, the lack of basic rights and services such as water, electricity, paved roads, building hospitals, schools, universities, factories, and more inspired Iraqis to go out into the streets. Since 2003, the Iraqi government had not built a single road! Finally, the Iraqi people, including middle class of merchants were tired of militias imposing illegal taxes and royalties. For 16 years, the militias have been killing Iraqi civilians with no accountability.

One of the reasons for the October 2019 Revolution was the crisis of unemployment. In 2016, the World Bank stated that the crisis of unemployment in Iraq amounted to 13 million unemployed Iraqis out of a population of 30 million. The people of Iraq believe that the number of unemployed is actually higher, and that more than half of the population of Iraq suffer from unemployment, and this is due to several reasons, including privatization as well as the sectarian system and neoliberal policy that America brought to Iraq. We are demanding a secular social system that isolates religion from politics and an end to the sectarian system and militias.

Enas: How has the 2003 invasion of Iraq affected the country through today — daily life, the economy, politically?

Ali and Sami: America chose a sectarian system for Iraq intentionally. America has enabled and supported these Sunni and Shiaa sectarian parties which have divided Iraqi society into sects and nationalities, distributing positions on this basis. Examples of this are the presidency of the Republic of the Kurds, the prime minister of the Shiaa, and the presidency of the Sunni parliament.

This divided sectarian system was done with the approval of Paul Bremer in parliament and with the blessing of the US administration. Bremer was leading the Coalition Provisional Authority (CPA) and assumed the title of Interim President of Iraq following the 2003 invasion of Iraq by the United States, from May 2003 until June 2004. Because of Iraq’s divided sectarian system, we have been living under murder, terrorism, corruption, and bureaucracy for 16 years. The Iraqi parties that were chosen by the US are parties obedient to the US regime, its neo-liberal policies, and it’s oil interests in the region.

Iraq has been affected by the neo-liberal policies of the US and World Bank which have deeply harming the economy of Iraq as Iraqi production of goods has stopped and privatized. The current Iraqi government cut state subsidies which had provided for basic human needs. As a result, there is almost no work in either the private or public sector in Iraq.

Enas: Despite calls for change, Iraq’s government has doubled down on rejecting reforms and has been violently suppressing protests. What are the protests demands, how are they protecting themselves from the Iraqi state violence, and how much hope do the protestors have that their demands will be met?

Ali and Sami: To answer this question clearly, the world must know that the crisis in Iraq is not only internal but much deeper, connecting to the global market and neoliberal politics. The global market wants Iraq to remain as a rentier oil-exporting country that does not produce anything, a consumer state that sells oil and buys goods from Iran, Turkey, and others. The whole world is part of the problem and the solution of Iraq.

So far, the Iraqi government does not have any plans to change this and we do not have an independent government. In the last elections, only 20% of Iraqi society participated in the election. The current prime minister was not elected. The current Iraqi government is no more than a puppet for Iran and America and it has no means to govern other than repression, murder, and terrorism, using militias against its people. Since the demonstrations started, militias have killed more than 500 people and wounded at least 15,000 so far. The demonstrators can not protect themselves from the militias. We do not have the types of self-protection and equipment that the militias and the government have. We have to think outside of the box and use homemade protection, such as making shields from iron or aluminum, wearing homemade gas masks, wearing motorcycle helmets, and using vinegar or Pepsi to clean our eyes from the teargas.

The lack of trust between the government and the people is a crisis. The current government made promises to the people over 16 years ago, but nothing has changed since then. We have lost faith in this government. We no longer want to demand reforms; we want to overthrow this sectarian system and replace it with a secular, humanitarian social system free of militias and terrorism; one that supports employment, local production, and human rights such as the right to demonstrate. We see this desire everywhere, in Tahrir Square and in the streets, expressed by the demonstrators in their drawings, words, and slogans.

"We don't want a government of murderers and criminals to rule us again," is a common demand at the demonstrations in Iraq.

Demonstrators are demanding job opportunities, a secular social system, and basic services such as electricity, health, education, and human rights. Demonstrators are demanding the end of the current sectarian system; an end to privatization, World Bank loans and recommendations, militias, and corruption. We want to reopen Iraqi factories and agriculture. Most of all, we want the current government to resign once and for all. We demand a fair election in accordance with fair election laws. We demand a humanitarian constitution based on citizenship and humanity and the separation of religion from the state and government.