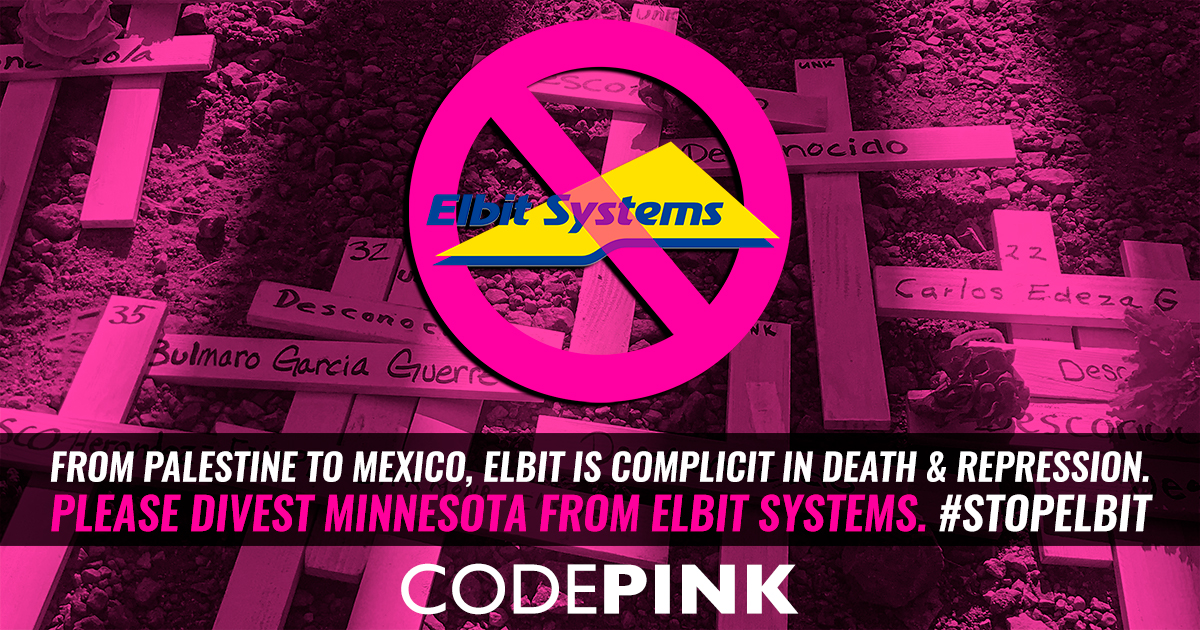 Did you know that the MN State Board of Investment holds a whopping $1.2 million (around 10,000 shares) in Elbit Systems, Israel’s largest weapons company? Elbit Systems is a global leader in weaponized and surveillance drones and border militarization—they are responsible for repression and death from Palestine to Mexico. Join Minnesota activists in calling on Minnesota Governor Tim Walz to divest Minnesota state public retirement funds from Elbit Systems.

Along with supplying the tools for Israel’s war crimes—Elbit has been involved in all of the major Israeli assaults in Gaza—Elbit Systems is currently under contract with the U.S. Department of Homeland Security to build a 53-tower “Integrated Fixed Towers” security project on the US-Mexico border. Minnesota state investments in Elbit Systems contribute to a system of border militarization that results in the deaths of migrants trying to cross.

Elbit markets its equipment to governments around the world based on the fact that it has been “battle-tested” (on the Palestinian people). Elbit’s armed drones are used by the Israeli army in daily surveillance and attacks in Gaza and Elbit is the sole supplier of small-calibre ammunition (bullets) to the Israeli military, responsible for over 250 deaths and over 10,000 injuries in Gaza since May 2018. Elbit also supplies surveillance on Israel’s separation wall in the West Bank, making it a key contributor to enforcing Israeli apartheid, and produces cluster bombs and white phosphorus, both of which are illegal under international law.

Join us to tell Gov. Walz that Elbit Systems, a company whose raison d'être is human rights abuses, is not an appropriate investment for Minnesota’s public retirement funds.

Minnesota anti-war and immigrant rights activists are outraged and making their voices heard. Last month they picketed outside the governor’s mansion (Governor Walz is a member of the MN State Board of Investment) and delivered 1,000 signatures calling for divestment. “We Minnesotans refuse to continue to profit from pain, injustice and tragedy at the hands of Elbit,” said Sarah Martin of Women Against Military Madness. Next Monday, September 16, at 5:30 PM they will again be outside the governor’s mansion, 1006 Summit Ave., Saint Paul and on September 25 at 7 PM they will be holding a BDS/border militarization teach-in at 4200 Cedar Ave, Minneapolis at 7 PM on September 25. Send an email to Gov. Walz now and show up in person on September 16th to protest and on September 25th to learn.

Together we can end Minnesota complicity in crimes from Palestine to Mexico.