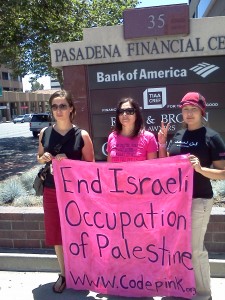 To avoid mass protests in New York City, TIAA-CREF moved their annual shareholder meeting to Charlotte, NC. In response to this deceitful attempt to hide from public scrutiny the divestment movement organized a National Day of Action on Monday, July 19. This resulted in protests in 20 cities across the nation as well as divestment dominating the meeting discussions.

Taking part in this effort, CODEPINK, JVP, LA Jews for Peace, Friends of Sabeel and others gathered in front of TIAA-CREF's offices in Pasadena to deliver a clear message to the investment giant: stop investing in companies that proﬁt from the Israeli occupation of the Gaza Strip and the West Bank, including East Jerusalem!

In a symbolic gesture, we covered our mouths with tape reading "censored" to express the sentiments of shareholders who were denied a vote on a resolution calling on TIAA-CREF to divest from companies, such as Caterpillar and Veolia, profiting from the Israeli Apartheid and its resulting human rights violations.

At the sound of a whistle, we took the tape off of our mouths and sang for TIAA-CREF to uphold human rights in Palestine and stop using investment funds to support an ugly occupation. The TIAA-CREF shareholders present, outraged at the lack of accountability of their company, then attempted to deliver our Censored Ballots to TIAA-CREF only to be stopped in front of the building by security and a TIAA-CREF representative and told that they needed an appointment to enter. After much protest they were able to convince the representative to deliver the ballot box on their behalf. Hopefully it wasn't just discarded as our divestment pleas have been.
Jeff Warner, fervent JVP activist and member of TIAA-CREF since 1967, was there to let them know that he doesn't want his "pension funds to support the illegal occupation of Palestinian lands".

One thing is for sure, the grassroots effort for justice in Palestine is gaining momentum and TIAA-CREF can no longer get away with the hypocrisy of their motto of "Investing for the Greater Good"!

Sign the petition and see a slideshow of photos from the TIAA-CREF National Day of Action.