San Luis Obispo City Council voted 5-0 to divest from the war machine! Read below to learn more about how a grassroots campaign took on the war machine in SLO--and won! 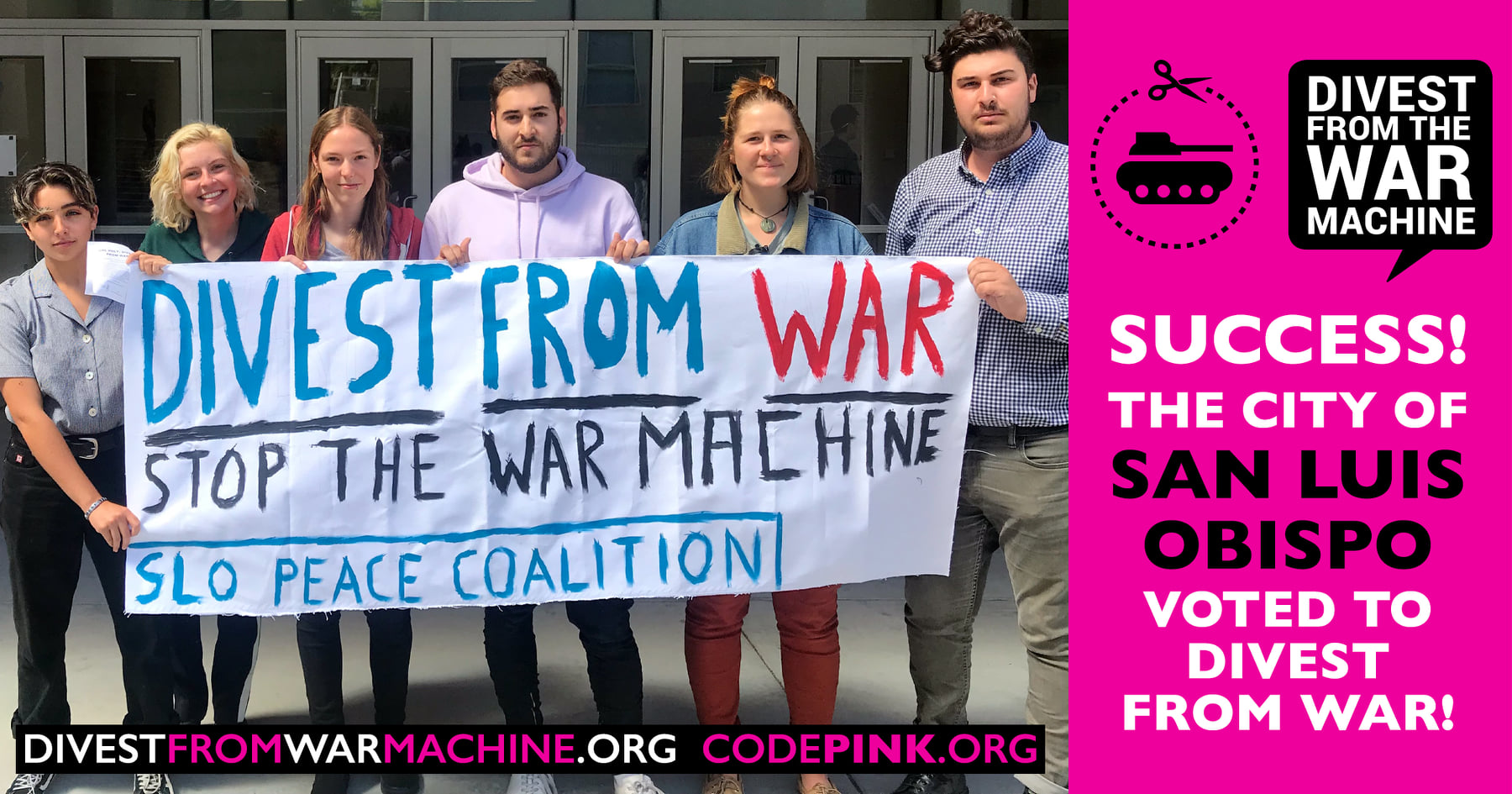 After six months of organizing, thanks to the support of passionate community members, San Luis Obispo City Council voted 5-0 to divest from the war machine. The City of SLO is now adopting a new socially responsible investment screening policy—one that will exclude industries like weapons manufacturers, fossil fuels, and private prisons!

This is a huge victory, and we should celebrate. The pressure we put on SLO City Council not only achieved tangible policy shifts, it also regenerated support for a lasting peace movement in the city.

This campaign’s success was the result of passionate grassroots community organizing. As an engaged constituent of SLO, with the help of the platform at CODEPINK, I had the opportunity to help shape the campaign narrative, generate local support, and open up opportunities for community engagement.

These are the steps we took to promote a successful campaign:

First, we looked for passionate community members interested in organizing around weapons divestment. After compiling a list of all organizations in the city that we identified as “progressive”, we reached out to them all individually to gauge interest levels. A few organizations expressed enthusiastic support, and we focused on fostering supportive relationships with local activists by showing up to their events and participating in their campaigns. Then we drafted a letter of support to circulate throughout the community, so that supportive organizations/individuals could voice their support for divestment. We encouraged these local organizations to spread the word within their networks and on social media. 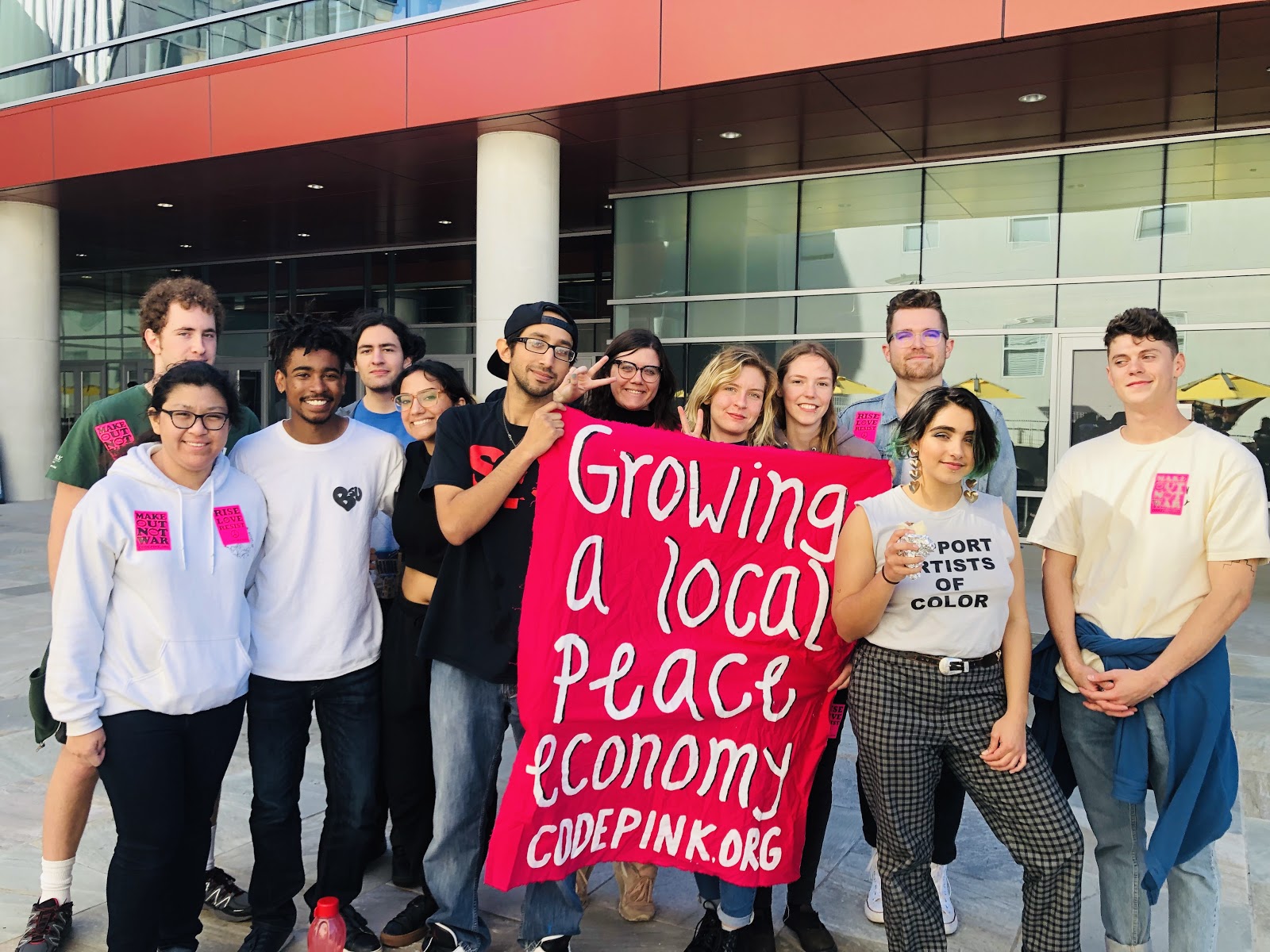 A major goal of the campaign was to shed light on the war economy and popularize the concept of divestment, so we put a lot of energy into building a presence and narrative through social media. Connecting the narrative of this divestment initiative to other trending political issues in the community inspired more young community members to hop on board, and highlighting those connections helped us garner attention on social media. We also created campaign graphics and encouraged supporters to print out posters, take selfies in support, and share them on social media with quotes about why they support divestment. Beyond simply raising awareness for the campaign, this was also a great public education technique. Social media plays a pivotal role in raising public consciousness and generating support.

Divestment is never a one-person show. You need to prove that there is a large amount of community pressure behind the campaign—which is why it’s essential for community members to personally communicate with officials. After finding allies in local organizations, we encouraged supportive constituents to reach out to the mayor requesting timeline updates and information about the divestment initiative. Having community members corresponding with our mayor was instrumental to finding out key dates for when officials would be meeting to discuss divestment. Having an ongoing line of communication open is also key for keeping elected officials accountable and transparent with the public. 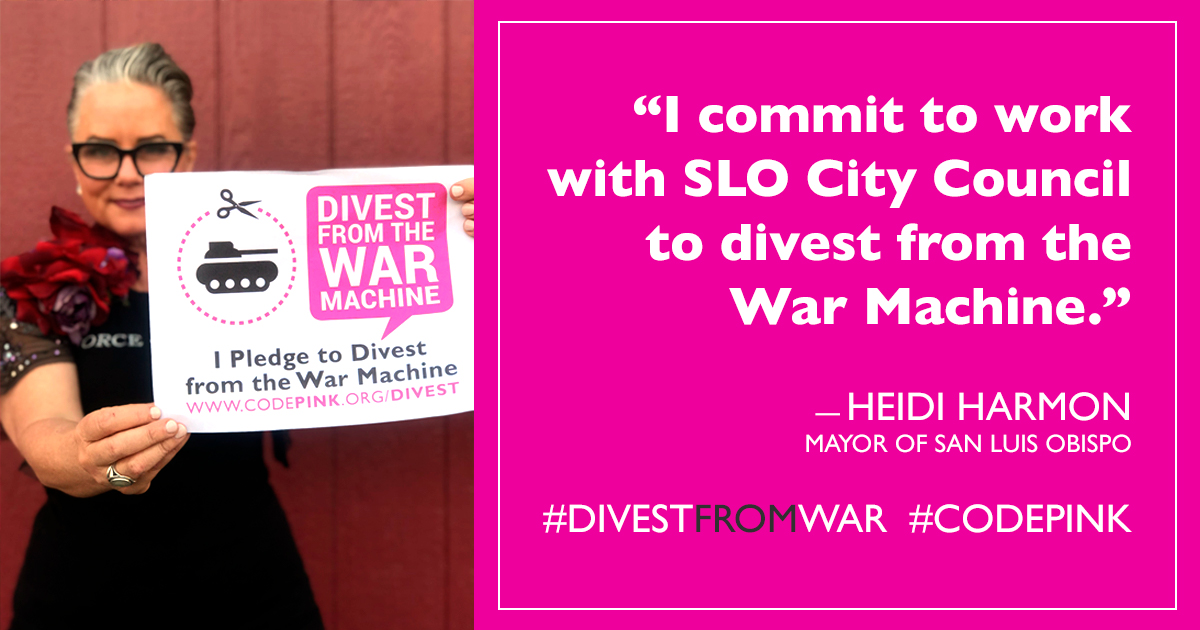 Once we had established personal communication, we extended the divestment conversation to the larger community by carving out accessible opportunities for political engagement. After confirming the dates and times of upcoming City Council meetings, we discovered that people had the opportunity to submit public comments at each meeting. To prove widespread community support, we created a quick and easy online tool that allowed community members to submit public comments via email. We also encouraged people to voice their support during the live meetings. Between meetings, we made sure to provide updates to the network of local supporters and personally kept in touch with all of them. 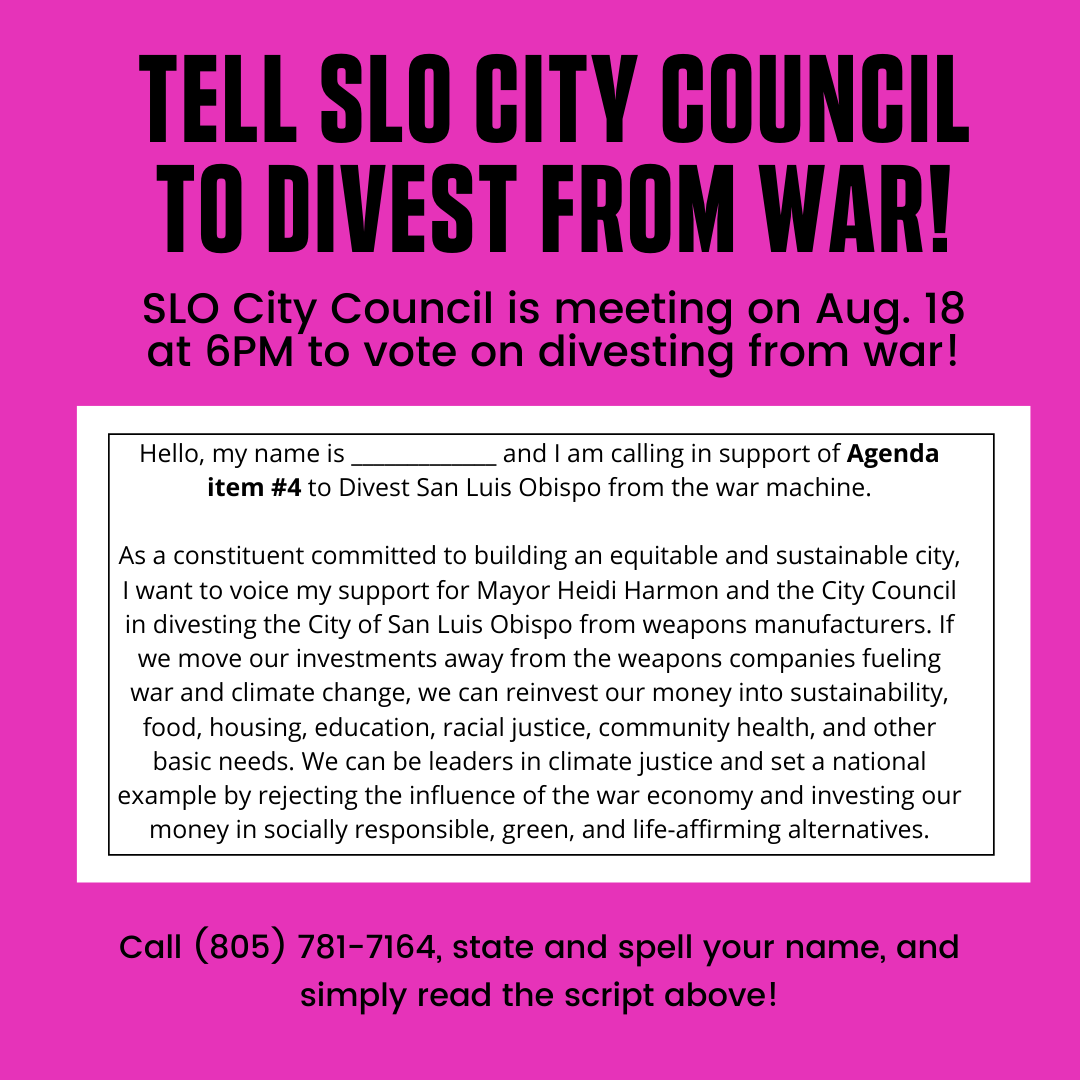 When it comes to amplifying grassroots campaigns like this, it helps to “be the media”. Telling our own story and receiving a substantial amount of support on social media was key to shaping the divestment campaign narrative for ourselves. Just as well, you can also work the media! By connecting with a local news reporter, we were able to get news coverage on the issue. Local news coverage can be helpful for legitimizing the campaign in the public eye, in addition to spreading greater awareness. By announcing to the public that SLO plans to divest from war, it also helps hold the City accountable.

By publicizing the issue so much, we were able to shape the narrative and hone in on what we wanted the new investment policy to target. It was important that we gained public support through social media, news coverage, and public comments—it proves to the City Council that their constituents care and will make sure they deliver. 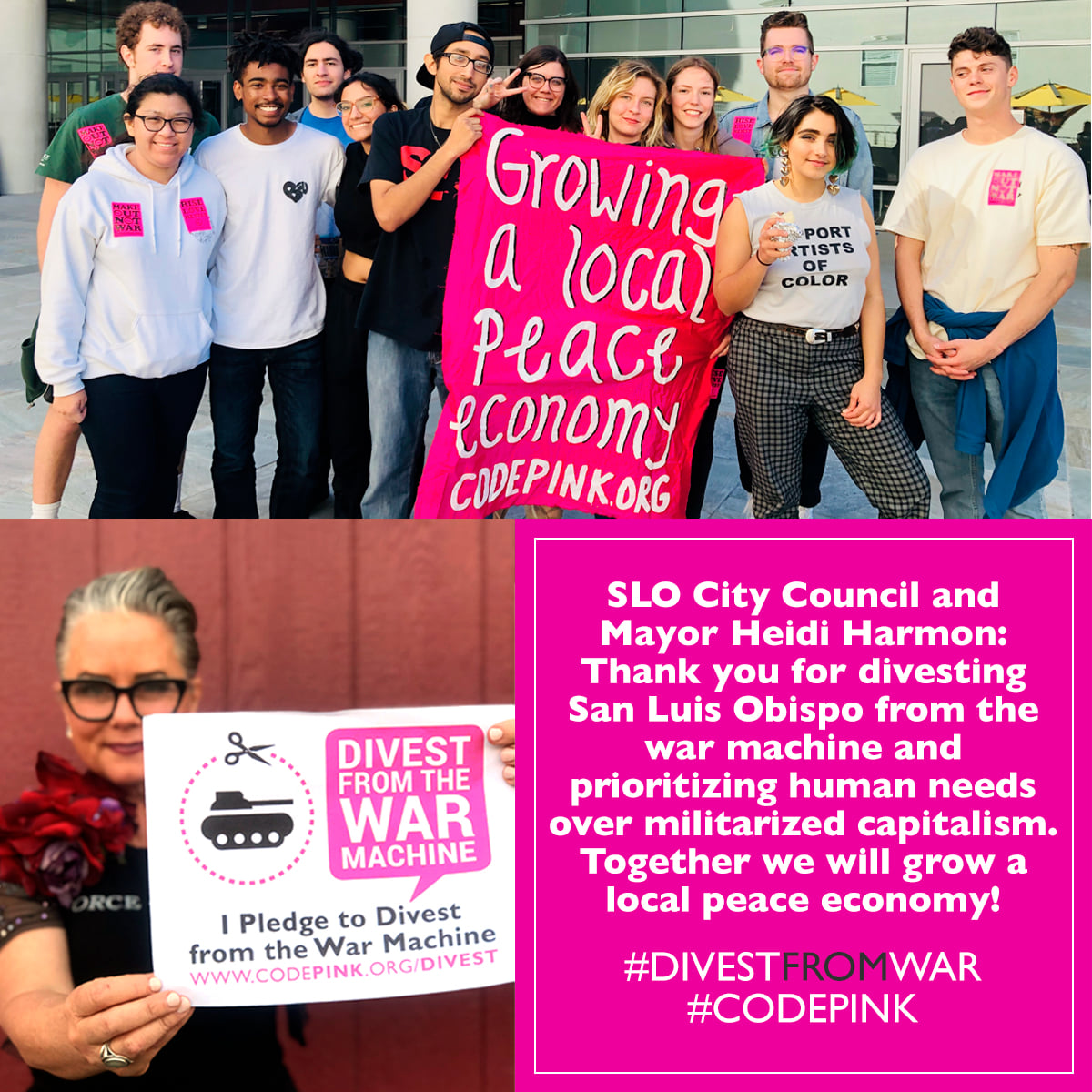 After a win, it’s time to celebrate—and use the victory to keep the local peace movement alive! If you live in SLO and want to keep organizing for peace, reach out to [email protected] and we can talk about next steps! The fight doesn’t end until we end the war machine, so let’s use the momentum to organize around divesting local universities, financial institutions, and other cities from weapons too. What city will divest next? Learn more about how to divest your city here, then let us know you’re ready to get started by emailing [email protected]. You can also sign up here and a CODEPINK organizer will follow up with you.

Thank you so much to everyone who helped the divestment movement succeed in San Luis Obispo. Together we can end the war machine, one city at a time!

Carley Towne is a National Organizer with CODEPINK's Divest from the War Machine Campaign. Contact [email protected] if you're interested in learning more about starting a divest campaign in your own city.