We were a strong, hardworking, and dedicated team, arriving from 12 different states in the union, from as far away as Wisconsin, New Jersey and Washington State.  We were members of  CODEPINK, Veterans for Peace, Nevada Desert Experience, and other peace groups. We were there for one main purpose:  to let the U.S. government, CIA, Pentagon, local police and military and civilian employees know that remote-controlled drone killing is intolerable, illegal, abominable, racist and MUST STOP NOW!  We were also there to demand an end to “Endless Wars” and to all war.  We got up at the break of dawn each morning, and every afternoon, during each 2 hr. commute rush, to bring our messages to the gates of “Drone Base Central,” Creech Air Force Base.

MEDIA:  We had fantastic media coverage, including an unexpected interview on Rising up with Sonali on Tuesday morning.  Eleanor and Toby were interviewed by Sonali, and it was aired on most Pacifica radio stations and other radio and tv programs across the country.
Listen and watch Here.

AP and Las Vegas Review Journal photographers came on Tues. am, and a short AP story about the protest and 6 arrests was picked up by multiple media outlets in at least 26 different states.
In addition, filmmaker Kari Barber was present much of the week, finishing up on final footage of a documentary that she and her husband Nico Columbant have been working on for many years, telling the story of our ongoing anti-drone campaign at Creech AFB. This film is expected to be completed within the next year, hopefully. 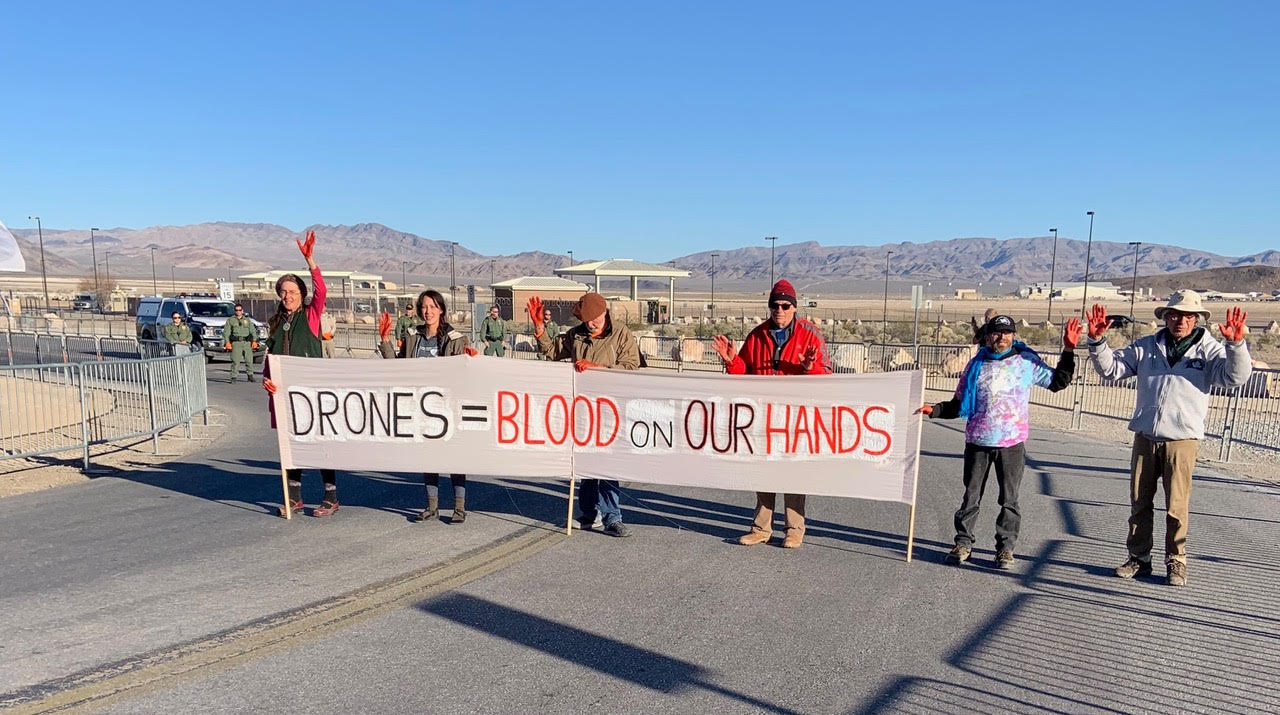 6 Arrestees Blocking the entrance to “Drone Murder Central,” just prior to arrest, April 3.

Our drone resistance culminated in a very successful nonviolent direct action on Wednesday, April 3,  to “SHUT DOWN CREECH.”  To demonstrate the barbarism of drone killing, we painted our hands with fake blood, and held a long banner, “ DRONES = BLOOD on OUR HANDS,” at the entrance to the gate.  Hundreds of cars passed us in the early morning commute, as we shouted out:  “No More Blood on Our Hands, Stop the Terror, Stop the Drone Wars” for nearly an hour. Watch here.  (41 sec).  Ultimately, with our bloody hands held high, we carried the banner out into the entrance road to "stop Creech drone murder” for as long as we could.  Many who were not able to risk arrest still joined some of the blockade, until the 2 min. warning was given.  Thank you everyone!  Watch here.  (11min.)

Arrestees were taken to the Las Vegas jail for a short detention, and were cited and and later released, surprisingly, all at the exact same time, in the early afternoon, in enough time to participate in the afternoon peace vigil at Creech the same day!  We were all given the same May 16 court date to appear before a judge.  Interestingly, this spring's entire arrest and processing experience was entirely different, and much easier, than last fall’s action.  During our October 2018 direct action at Creech, there was absolutely no warning given (a first in our 10 years of doing this work). Last fall, after the Las Vegas police read aloud the usual, long “riot act," warning us to disperse and that we may experience “bodily harm," etc, the police then rushed quickly into the street, and even arrested one man who had no intent to risk arrest.  The 7 arrestees were then taken to the LV jail and released at completely different times from each other, between 9 and 33 hrs after their arrest!  This was the  longest detention that we had ever experienced before.  One thing is certain:  There are no certainties when risking arrest at Creech Air Force Base! 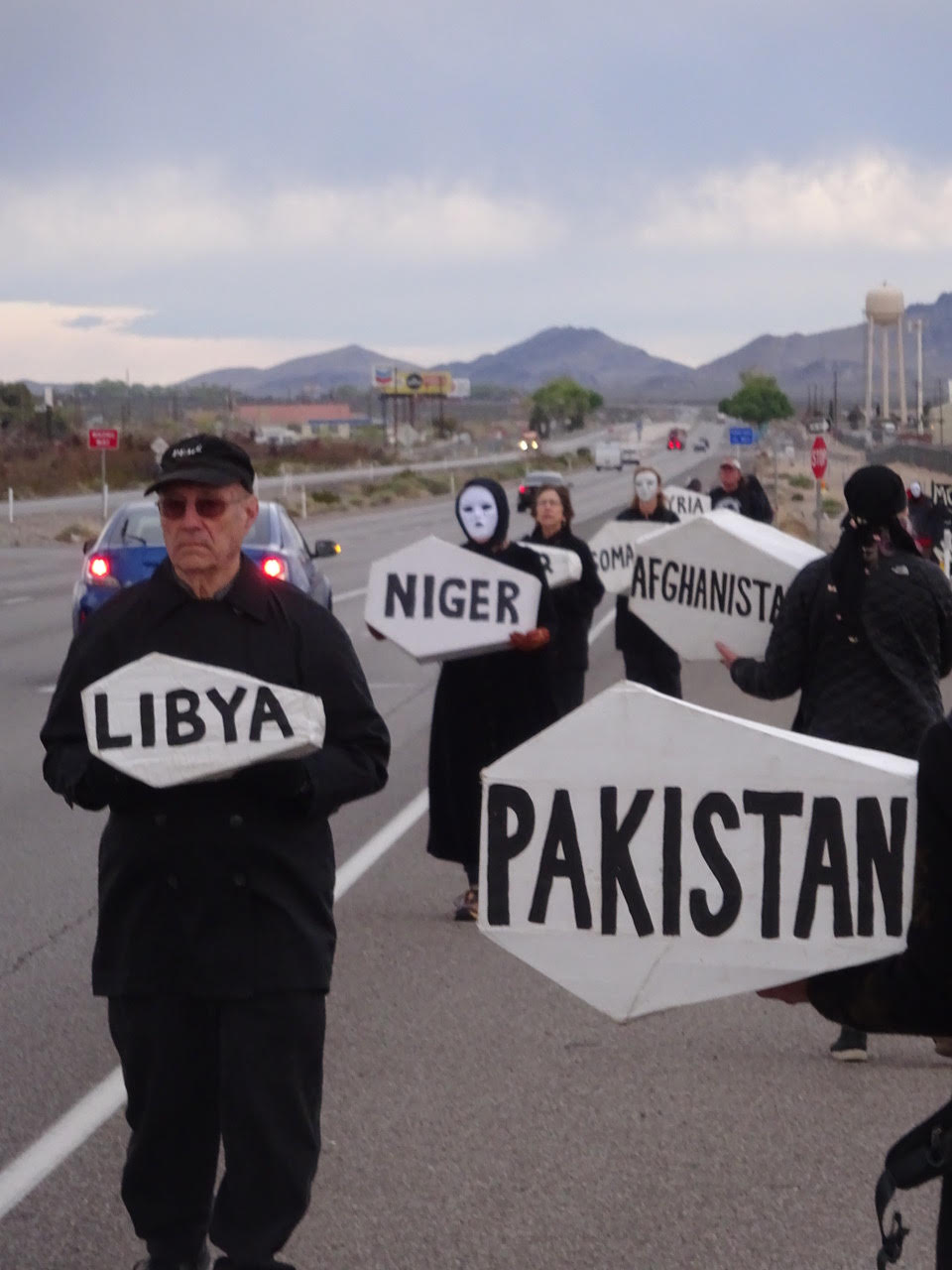 Other memorable and successful actions during the week included:

- A solemn Funeral Procession with black clothing, white masks and coffins to mourn for the dead.  This also included an altar to commemorate the child victims of U.S. drone attacks.
- April 4 (am):  NO to NATO, YES to PEACE, A solidarity action to a call for a global action against NATO, on it’s 70th anniversary year.  We also brought messages of “U.S. Hands Off Venezuela,” knowing that it might be the very next target of U.S. aggressive intervention.
- April 4 (pm):  We broadcasted, via loudspeaker, Martin Luther King’s famous speech, Beyond Vietnam, on the 51st anniversary of his assassination by the U.S., and on the 52nd anniversary of the date he gave the speech.  (Interestingly, within 10-15 minutes, the military closed the gate where we were broadcasting the MLK speech.  Maybe it was too much truth and wisdom for the U.S. military to hear? You can hear it HERE
-Visit to the Nevada Test Site, site of continued nuclear weapons development and testing and the closest thing to hell on earth, just 15 min. north of Creech AFB.  (Plutonium was just recently shipped there against the will of the State of Nevada!)
-April 5:  FLY A KITE NOT A DRONE:  The Last vigil of the week:  5 beautiful kites were flying overhead to remind the airmen and airwomen what our skies should really be flying, and to leave them with a positive vision of joy, peace and beauty.  It was a beautiful and positive last exchange that hopefully will help draw some of them to the side of peace.

There are so many things that could be said, but this is a brief summary of a most rewarding and productive week.  What made it exceptionally rewarding this year is that we were joined by 5 new activists to our SHUT DOWN CREECH campaign.  We were especially grateful to all the many ways people stepped up to the plate and contributed, offering special skills, but also being very eager to help and take on tasks even when not asked.  It was a truly very dedicated and committed team.  We will hold off specific expressions of thanks, for fear that we may leave someone out, but please trust that we are deeply grateful for the tremendous team spirit we witnessed.  We will, however, offer special thanks to two folks who contribute in very special ways, year after year:

Candace Ross, The Goddess Temple Priestess, who does a superior job both maintaining and improving the temple grounds and guest house, year after year, helping to improve the space that is so vitally needed for this work.

Cres Vellucci, “Press Man Extraordinaire,” who assists us with press releases and press contacts year after year.  Without him, our outreach would be so compromised.

We were a very hard working and supportive peace community that converged for one week from across the country for a common cause:  To Shut Down Creech, and Shut Down Militarism!  We want to grow, please help us.  Think what we could do with 500 or 1,000 people!

With Much Gratitude and Love, Forever,
Toby, Eleanor and Maggie

Divest from the War Machine!  Go HERE  to find out how YOU can divest from war! 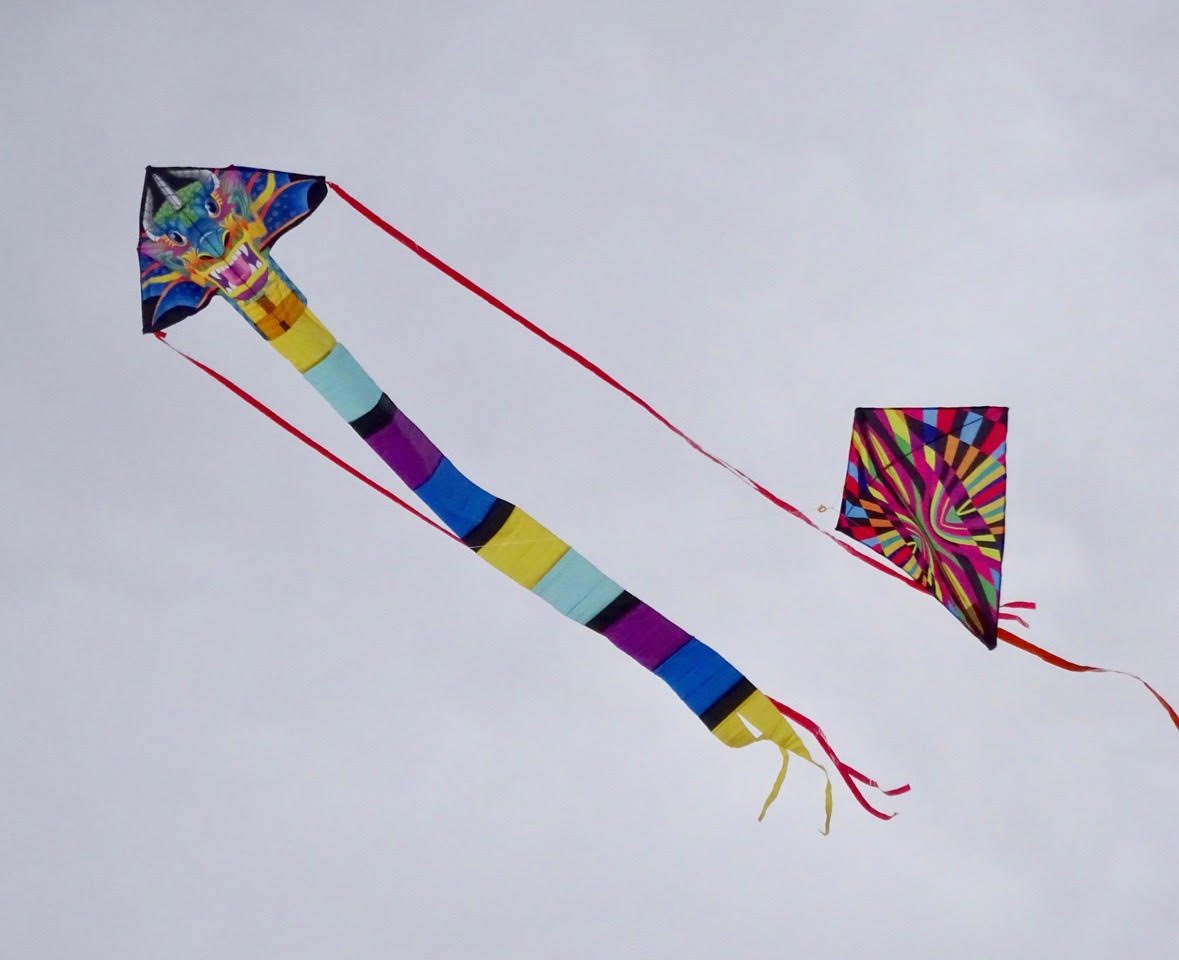 To the People of Afghanistan:
We fly these kites for your liberation!  May it come one day soon!  17 Years: ENOUGH!! 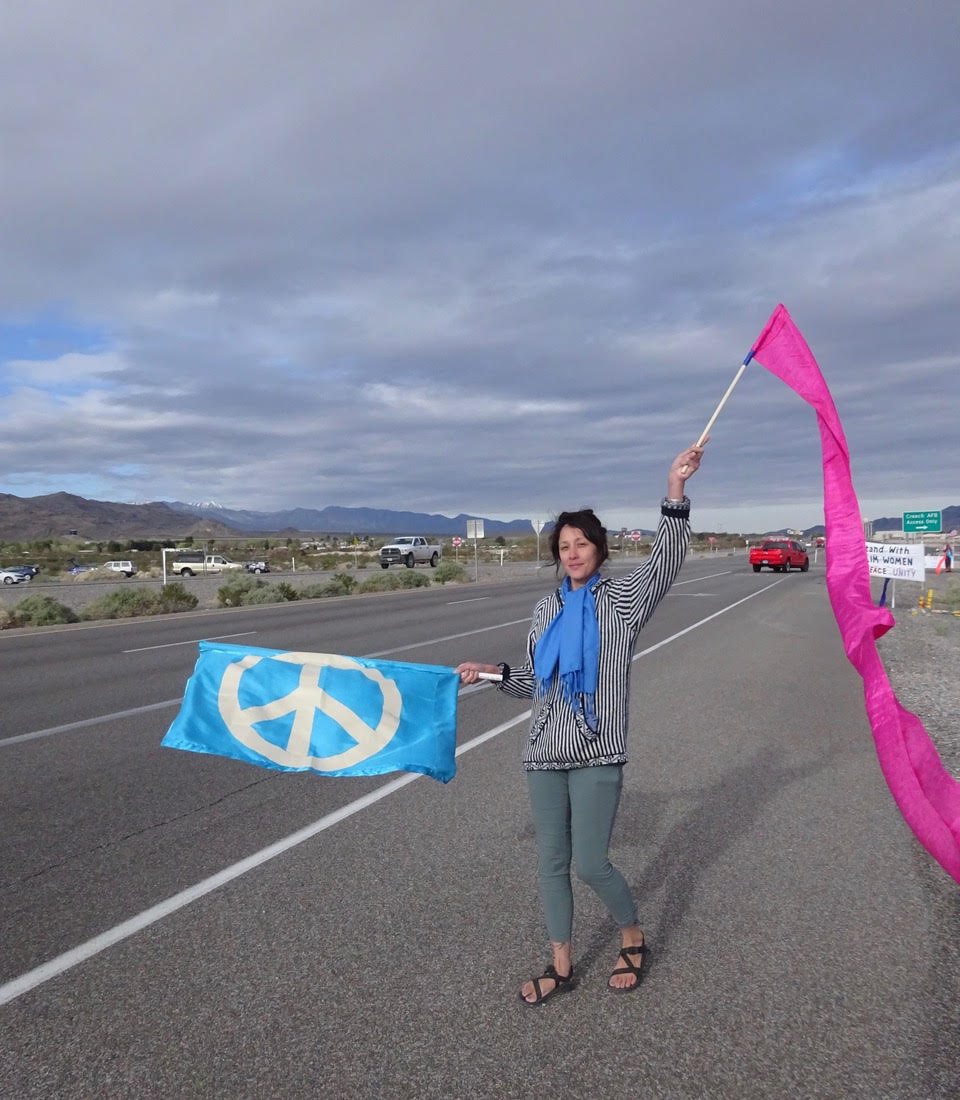