Tell the UN: Release the List of Companies Involved in Israeli Settlements

Tell the UN: Release the List of Companies Involved in Israeli Settlements 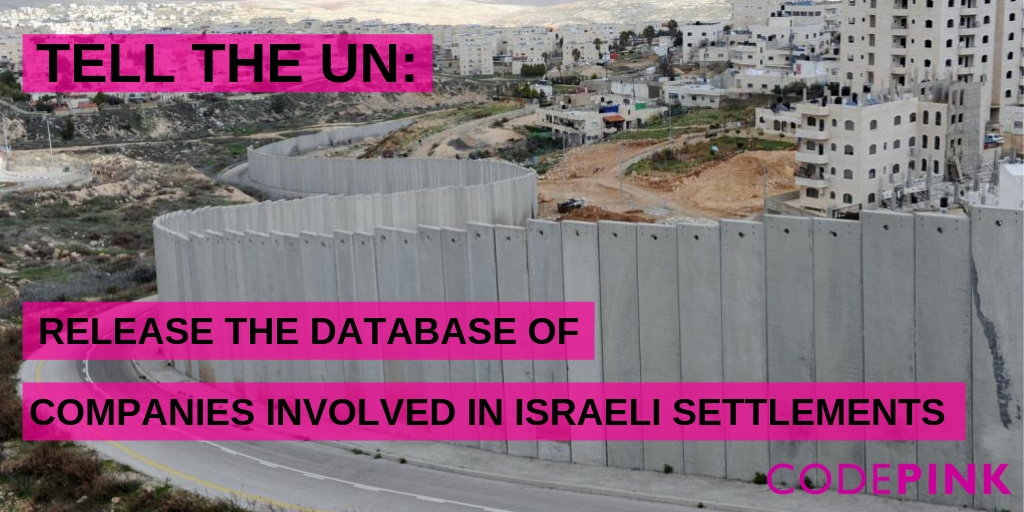 In 2016, the UN Human Rights Council voted in favor of establishing a database of companies involved in business activities with Israeli settlements in the Occupied Palestinian Territory (OPT). Israeli settlements are illegal under international law; a database of businesses with activities or relationships in settlements would provide transparency for governments, businesses, and the public, and can be used to ensure that companies are not complicit in human rights violations and violations of international humanitarian law.

Almost three years since the resolution calling for the Database, the UN has still not published the result of its work; this is due to political pressure from Israel, the United States and some European states. On 4 March 2019, the High Commissioner issued a letter stating that “further consideration is necessary” to fulfill the mandate, and that her Office will continue to finalize the “mandate in the coming months.”

These unnecessary delays allow international and Israeli businesses to continue to exploit Palestinian natural resources, and contribute to and profit from Israel’s impunity for its expanding colonial settlement project and human rights violations.

We strongly urge you to abide by your commitments and immediately publish the UN database of companies involved in business activities with Israeli settlements. Jewish-only settlements are discriminatory, built on stolen Palestinian land, illegal under international law, and directly contribute to Palestinian suffering.