On Wednesday, Sen. Max Baucus called on the IRS to investigate non-profit organizations engaged in political activity, focusing on groups that are newly flush with corporate cash and strongly connected with the GOP. Karl Rove better get ready to open his books.

Sen. Baucus wrote a letter to IRS Commissioner Doug Shulman stating that the groups in question “have raised serious questions about whether such organizations are operating in compliance with the Internal Revenue Code.” He has asked for the IRS to help identify any tax laws that these groups may have violated. His next step would be to oversee his own committee investigation and “take appropriate legislative action” if needed.

[caption id="attachment_9433" align="alignright" width="234" caption=" People have been moving Rove's new memoir to the appropriate section of their local bookstores. "] 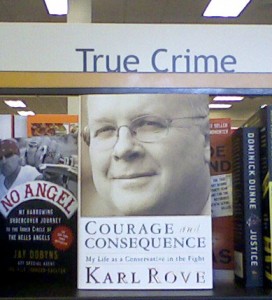 Sen. Baucus's much needed leadership has no doubt been spurred on by national campaigns demanding an investigation of Karl Rove's so-called grassroots, ahem astroturf, group American Crossroads. Watchdog groups assert that Rove's group accepts millions from shadowy corporate donors and funnels the money into the campaigns of Republican candidates. As the mid-term election season heats up, this topic will only get hotter.

Thousands of Americans have seen through Rove's sham operation and have sent letters to Congress calling for an investigation of his American Crossroads group. Groups like American Crossroads Watch (AWC) have stayed hot on Rove's money-trail. And they're serious about bringing Rove to justice. AWC recently even put up $100,000 for information leading to the arrest and conviction of Rove.

Sen. Baucus's formal request for an investigation may just produce a lucky winner.