I was planning for a day to remember, and it turned into a day I remember every day.

It was 2014, and since the beginning of the Israeli assault, I had been praying that by my birthday, July 18, the war would be over. It was to be my 22nd birthday, and the first one after graduation from IUG (the Islamic University of Gaza) in English literature. For days, F-16 jets had been flying overhead 24 hours a day. As my birthday grew closer, I would have settled for even a brief ceasefire.

At 7 on the morning of my birthday, I was browsing the news on the Internet, hopeful, but no ceasefire was in sight. My dad’s mobile rang. We thought it was a “precaution” call from the Israeli occupation army asking us to evacuate our home: me, Mom, Dad, sisters and 13 stranded nieces and nephews, including my 2-day-old niece, Lana.

Dad looked at the phone and saw it was indeed an unknown number. We all screamed, “No, Dad, don’t answer!” But Dad answered. A wailing voice violated our silence. It was my cousin, 35 years old and a tough guy. He told Dad that the Israeli navy had just killed his brother, Ali. Dad listened without uttering a word. Was he shocked? Was he expecting it? Ali was a fighter and could have been targeted. My birthday now was the anniversary of a martyr. 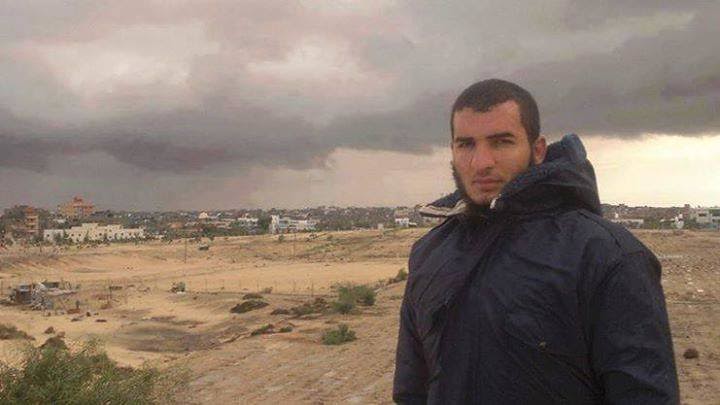 Ali, Sarah's cousin, who lost his life at the hands of the Israeli navy

I tried to forget about my birthday and started thinking about Ali’s mom. Just days earlier, her other son had been killed in a raid by the Egyptian army on the tunnels where he had been working. What grief she must have felt, to lose two sons. Did she blame herself for bringing them into a world of conflict, missiles and blood? I shook my head to dispel these thoughts... no time to think about her... we had to convince my father not to leave the house while F16s are flying around. He was preparing to go to the hospital where the family men were gathering to bid farewell to our martyred cousin. We could not convince him not to go.

“Ohhhh, thank God!” I heard my older sister sigh in relief, realizing the call was not from the Israelis, and that our home would not be bombed. She had been afraid for her baby girl. I wondered if she was thinking of Ali’s mother who lost her sons without a goodbye. I wondered what determines that one person’s destiny is to live while another’s is to die.

I had been planning to wear a red dress but I wore a blue sidal instead (Muslim women’s praying garment), preparing myself in case of an evacuation. Instead of the big cake Mom had promised to bake, she made us cheese sandwiches and tea. My sisters were supposed to teach my favorite song to their kids so they would sing it to me, but they could not keep them calm.

By noon the “festival” had begun. A massive F16 missile targeted my neighborhood; a spokesperson for the Israeli army claimed that rockets were being launched from here. It was a massacre. I have never experienced anything like it. The total destruction makes you feel that the afterlife has begun and you need to survive, yourself, and forget about everyone else. I did not care about my family or my belongings. Every time I remember that day, I cannot forgive myself for being so selfish; that day left me in utter confusion.

The paramedics spent hours clearing the dead bodies. It was the first time I saw martyrs. I saw the bodies of neighbors who I had last seen while we were all visiting as we cooled off our roofs. I saw the girls who used to accompany me to the university, and the boys who would knock on our door and then run away. I remembered Ward, a kid I had once caught and gave a spanking to. He was so cute; he was being spanked and yet he was laughing. The missile hit as he was watching a pop show on TV, a favorite program he used to imitate in standard Arabic accent. I saw him wearing a white mask, with no legs. I saw the whole family get killed and I did not cry, yet seeing Ward killed is the shock I cannot wake up from. I wish time would turn back and Ward would knock on our door. I would say: "Ward, come here,” and I’d give him a big hug. I saw all this from my window.

It is one year after the war and I still see that view every day. I still see the face of Ward on every rock. The window was locked for three months after the war, until one of my nephews opened it to see a bird. The bird was poised on the roof of the ruined house. Sunrays were peeking through the window and I felt it was time to reply to the sun.

Sarah, 22, is a freelancer translator, bookworm and logophile from Gaza who writes for We Are Not Numbers.