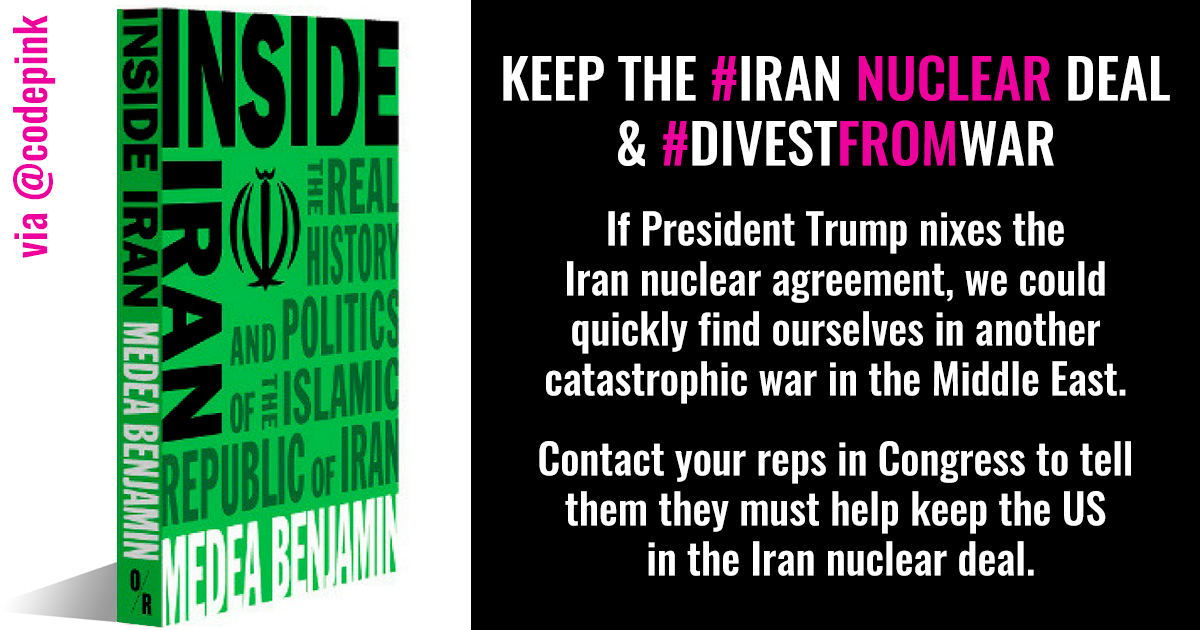 As I travel around the country speaking about my new book Inside Iran: The Real History and Politics of the Islamic Republic of Iran, I explain how the consequences of the 1953 CIA coup that overthrew Iran’s democratically elected government persist to this day. There would probably never have been an Islamic revolution in 1979 or a decades-long conflict between Iranian leaders and the west. Now we are poised at another critical moment in history. If the US pulls out of the Iran nuclear deal, as President Trump threatens to do on May 12, we could be careening down the path of another catastrophic, senseless war in the Middle East.

We can’t let that happen. Contact your representatives in Congress and let them know that we want the US to uphold the Iran nuclear deal.

I have visited Iran several times in recent years. I am always amazed at how, despite the years of Western sanctions and Iranian government restrictions, the people are so educated, friendly, and worldly. I am also surprised at how pro-American they are. People were dancing in the street when the nuclear deal was signed in 2015, hoping it would mean an improvement in their economic situation and an improvement in US-Western relations.

The American people are also in favor of the nuclear deal. Despite the constant drumbeat that Iran is a threat to our security, a recent poll found that 64 percent of Americans oppose withdrawing from the nuclear deal.

All the other signatories to the agreement—France, Britain, Germany, Russia, China and Iran—want to keep it. French President Emmanuel Macron is in Washington DC now, trying to convince Trump not to pull out, and German Chancellor Angela Merkel will meet with Trump on Friday with the same message.

Trump’s own Secretary of Defense, James Mattis, has said the agreement is in the US national interest, and CIA Director Mike Pompeo, during his confirmation hearing to become Secretary of State, agreed that Iran was complying with the terms of the agreement.

Not only is this deal key to future relations with Iran, it is also key to successful talks with North Korea. Why would Kim Jung-Un sign an agreement with Donald Trump if Trump goes back on a deal already signed with Iran?

Tell Congress that we need to extricate ourselves from Middle East wars, not create new ones. The Trump administration should honor the agreement and use it as a springboard to normalize relations with Tehran.

Israel and Saudi Arabia want the US to join their obsessive, anti-Iran rivalry. While the deal was being negotiated, Israel urged the US to bomb Iran instead. Saudi’s Crown Prince, heir to the throne of an absolute monarchy, has been spreading the absurd notion that the Iranian supreme leader “makes Hitler look good.” Getting involved in the Israeli and Saudi feud with Iran is not in our interest or the interest of peace in the region.

P.S. You can buy my new book on Iran here and contact [email protected] if you would like me to speak in your community.