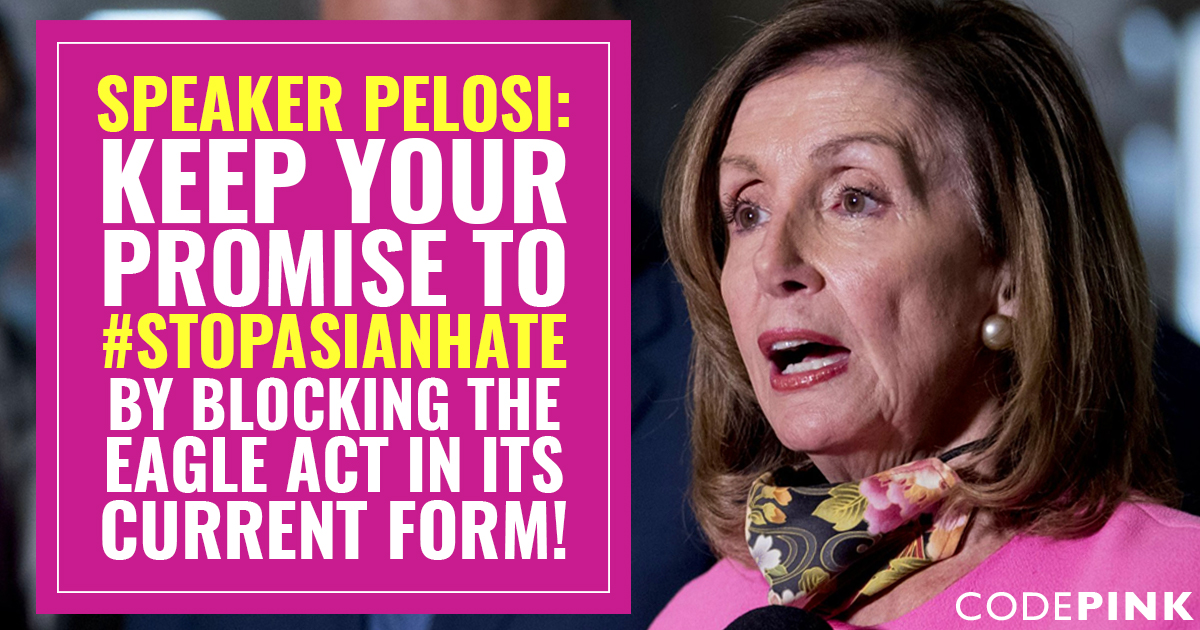 I am writing to you today to urge that you block Gregory Meeks’ EAGLE Act (H.R. 3524) until all military funding, anti-China rhetoric, and language that threatens the United States’ long-standing One-China Policy is removed from the bill.

While the EAGLE Act seeks to ensure American global leadership, it ignores our most pressing domestic issues, ensuring that America is not a role model for other nations as our citizens face deteriorating health systems, out-of-control police and gun violence, mass incarceration, and disastrous climate change. Instead of spending our tax dollars on solving the greatest threats that the U.S. faces, like climate change, the EAGLE Act in its current form adds to the dangerously high levels of pollution by the U.S. military by appropriating over $200 million dollars to International Military Training and Education.

The EAGLE Act brings us dangerously close to war with China by deepening the U.S. commitment to defend Taiwan at all costs, including with nuclear warfare. This deeper commitment to Taiwan ignores years of established U.S. foreign policy known as the One-China policy, which has delivered peace and stability to the region. The EAGLE Act provokes conflict and begins the buildup for a protracted war over Taiwan by encouraging Taiwan and other U.S. allies in the region to heavily invest in weapons and munitions “to meet contingency requirements and avoid the need for accessing United States stocks in wartime.” These buildups cannot reasonably be called deterrence while this bill also agitates existing agreements for peace like the One-China Policy.

Another unacceptable aspect of the EAGLE Act in its current form is the consistent anti-China rhetoric that is repeated again and again throughout the bill and in promotion of the bill. As the language in the EAGLE Act that portrays China as manipulative, distortive, and predatory is spread by mainstream media outlets, the narrative paves the way for more dangerous, and potentially deadly, scapegoating of not just China’s politicians and leaders but all Chinese and Chinese-perceived people, including other Asian and Asian American communities. We have already seen coast-to-coast violence against Asian communities in the U.S. in part because of this kind of political rhetoric; this is a continuation of the political rhetoric the Trump administration began.

Speaker Pelosi, you yourself said: “Congress must continue our work towards stopping this violence and bigotry in America. I am proud to be able to represent such a strong AAPI community in San Francisco and will continue advocating to combat the fear this community has to live with each and every day.”

The AAPI community in San Francisco and all over the world need you to put action behind these words and actually use your power and authority to address this epidemic of anti-Asian violence. Words are not enough here — you must prevent your chamber from passing anti-Asian rhetoric that fuels this violence. Don’t let this epidemic of ignorance, hate, and violence that started under Donald Trump continue through your chamber and into American law.