Our Birthday Present for Ed Snowden 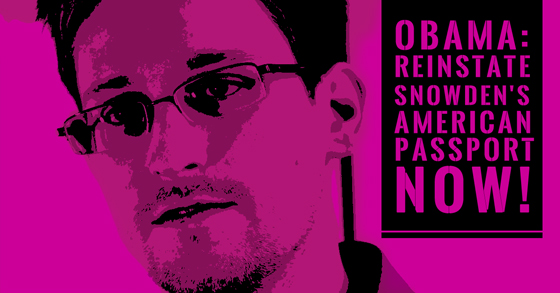 Today, June 21, the heroic whistleblower Edward Snowden turns 32. Last week while CODEPINK co-founders Medea and Jodie were in London, they asked Julian Assange what Ed might want for his birthday. Julian’s response: his freedom, the return of his passport.

Snowden was on his way to Latin America via Moscow to seek asylum when the U.S. revoked his passport, leaving him stranded for weeks in Russia’s Sheremetyevo airport . Now, he can’t leave Russia. The leadership in Moscow has granted him a 3-year residency permit but he doesn’t have the ability to travel abroad. Even Putin acknowledges Snowden is trapped!

Edward Snowden’s courage exposed the truth about NSA spying so we could work to free ourselves from it. Despite the recent (largely symbolic) sunsetting of three Patriot Act provisions curtailing the NSA’s reach, its surveillance and data collection powers remain alive and well. But without Snowden, we wouldn’t have made any progress toward gaining our civil liberties back.

People from all over the world have contributed to the birthday Tumblr CODEPINK made for Snowden to show our appreciation for the extraordinary sacrifices he made so we would know the truth about government spying.

Take a moment now, and call on Obama to reinstate Snowden's passport!