One Pound Capitalism, a Pinch of Democracy and Keep On Keepin’ On 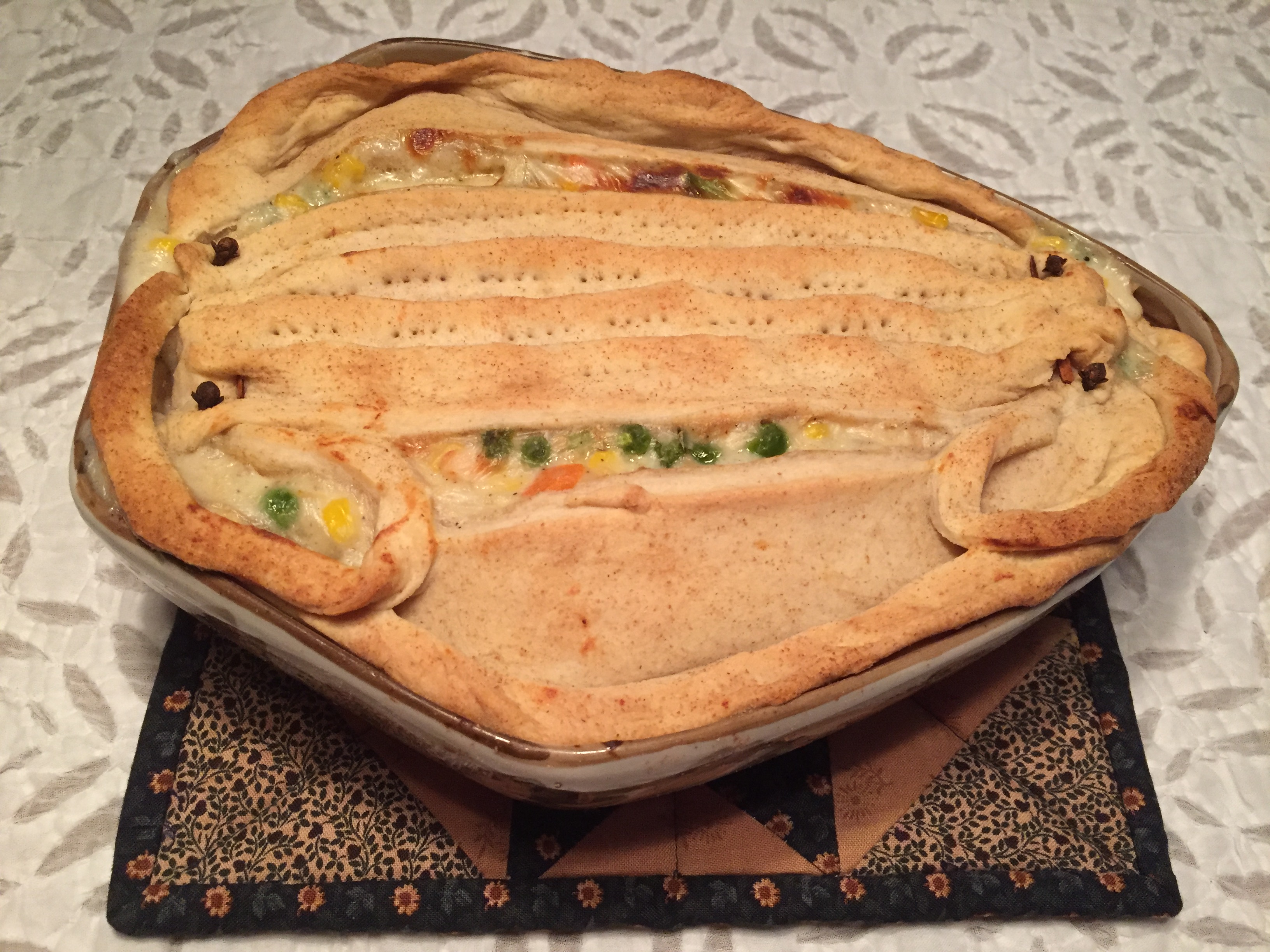 (Includes a Discomfort Foods recipe, and the words in bold inspire it)

For Trump the ‘warrior’ talk isn’t about shared sacrifice. He is adding a cheap patina of valor to his demand that people endanger themselves and in some cases die to restore the greatest economy that ever was … the one he created, the one he thinks will get him reelected in November. This is less warrior than cannon fodder. — Josh Marshall, TMP, May 7

Marshall wrote that in response to one of Trump’s latest nonsensical utterances: that he views the “great citizens of this county to a certain extent and to a large extent as warriors.” Of course, Trump wants America to snap out of its induced COVID coma and open up. After all he wants America’s “to-a-certain-extent-and-to-a-large-extent-warriors” get busy keeping America profiteering again. What Trump didn’t add was that the warriors are also “overworked, underpaid, under-protected, and under-appreciated,” to a large, very big extent. And by golly they work for rich white people like Trump.

But most of America is not white and rich. In fact it’s the opposite. It’s non-white and poor-white. In fact, there would be no rich white people in America if it wasn’t for exploitation of the hands of non-white and white working people. And come to think of it, there’s nothing truly rich about rich-white-America. In fact, it’s dull, boring, and bland.

They signed up for a job to work for a company and to make ends meet. These workers didn't sign up to die. — Kim Cordova, president of United Food and Commercial Workers Local 7, Colorado, NBC News, May 8, 2020

With Covid, the way it’s treated, in my view it’s just a symptom of something that happens. All. The. Time. We still have construction workers who have cave-ins in trenches. Well that’s just ridiculous. Or falling off a building. No! We can’t have that! — Joan Ratzlaff, co-chair, Salina Area Workers Coalition, Kansas.

Even before the pandemic hit, this country’s workforce was suffering unimaginable hardships. And their collective suffering has, for the most part, remained outside the government’s livelihoods-policy imagination like a scabbed-over wound that now, thanks to COVID, has suddenly exposed its rawness for all to see and act upon. A rawness without which this country could not come to a full ill-functioning circle.

This richest country in the world, for instance, would have no public transit workers, 26% of whom are black, deliver restaurant workers to their place of work, every day. The well-off would have no restaurant workers to serve them their fave chicken dish; no chicken to give underpaid poultry industry workers carpel-tunnel syndrome; no carpel-tunnel syndrome to be left untreated because many workers like them have no healthcare to speak of.

There would be no healthcare for female and Latinx workers, 53.2% and 40.2% of whom work in building cleaning services, respectively; for women who make up 64.4% of all of the country’s frontline workers in industries where 41.2% of the workforce is also non-white; or for non-white workers, who along with women and foreign-born — 23% of whom live below the 200% poverty line—a poverty line under which live workers like the black bus driver who delivers restaurant workers to their workplace to serve chicken. Coming full circle, every day.

And the real ugliness of America lies in the country’s rich, white profiteers whose latest fad is viewing their workers as COVID fodder.

Meanwhile, states are “opening up” without having met the White House’s own criteria that must be followed before going ahead with a phased comeback—criteria that include showing a downward trajectory of cases over a two-week period, and vigorous testing and antibody testing.

The administration is lying. State governments are lying when they say things like it is safe to attend concerts standing 6 feet apart. And I suppose the owners of that crowded restaurant in Colorado — a state that has seen more than 19,700 cases of COVID and 973 deaths so far — were demonstrating how much they love their mothers on Mother’s Day.

Here, a worker at a large frozen-food factory in Kansas explains the company policies that he and his fellow workers have to live under:

I am to this day not 100 percent sure on what happens entirely when you call in absent or self quarantine or something like that. My impression… since about late March when they upgraded kinda the measures that we’re taking into account, employees would no longer be punished for calling in absent, which was the case before when there was a points system, where absences even with doctors’ notes would count as one point and at ten you would be terminated. And at six you would be denied any opportunity for promotion. Now it seems to be that they’ve taken an incentivized approach to coming to work where you don’t seem to be punished for calling out but you are rewarded with a $100 bonus [for a week’s work] for not missing any of your scheduled time to work, which to me seems like a bribe to come to work while sick… It’s the appreciation bonus, is what they call it.

Self-quarantining to my knowledge doesn’t seem to be rewarded. There’s no pay. If you call in with any amount of symptoms, you’re not allowed to come back until you’re symptom-free for three days. Which seems like good policy but you’re either forced to take it without pay or to consume your vacation and holiday pay which is not unusual but not great… The only paid sick leave that I understand is if you are made by the company to quarantine if there were a confirmed case to happen there.

As for other measures like masks, there are temperature checks that occur on entering the facility… A lot of the time they’re done out in the cold in the morning and I’ve seen an awful lot of instances where they would read temperatures that would suggest like, cold body temperatures and then allow people into the facility.

The problems then occur (with the masks) mostly when on the floor, er, the masks were implemented very recently… maybe one week ago. Before that there was a policy in place that everybody would be expected to maintain six feet of social distancing, except that in the more manually intensive packaging lines almost none of this changed. You would still have situations where the production speed is too fast for the packagers to keep up without more people coming to the rescue.

So instead of maintaining maybe three packers on a line like six feet apart and four lines total, it would be five people at less than a foot and a half apart, desperately like flying one way or the other just like grab products and package it and ship it out. All day. The same people next to each other rotating around the line so that everybody would be in everybody’s spot at one point. And you have members of management that would come by and they would catch you if you were talking to each other less than six feet apart… but they would seem to walk right past all the people that would package continually all day…

That was before the masks… Since the masks have been rolled out not only has that continued to be the case, as if this suddenly, you know, we can make up for the bad job we did before with the social distancing. Like this is the perfect defense against everything.

But the masks bring more problems. They are an extra piece of personal protective equipment that has to be worn underneath an additional full head net for your hair… everybody must wear. It’s pinned down further with… safety glasses and with hard hat with ear muffs, so it peals very tightly across the mask which makes it even harder to breathe than just the mask.

So if you rotate to a spot with harder work, it gets really hard to breathe right. A lot of people have started reporting signs of heat stress, or other things that like not being able to catch your breath. There have been some complaints about it but there are no solutions, and to an extent it seems like there’s even been a mild effort to pass this off as, oh, this is just you not being used to the mask, you know. Your body just thinks the mask is choking you. You’ll get used to it. Keep on keepin’ on.

Now if you look at some of the meatpacking facilities like Smithfield… some of the pork producers, they’ve had cases skyrocket to the hundreds just in that facility alone. And I don’t really think that our things here are the same as there, but I don’t think that they’re so different that it shouldn’t worry us a little.

Mix the salt into the flour. Cut the butter in little pieces and incorporate in the flour using your fingers. Add just enough cold water to make a stiff dough. Then break in half, wrap in saran wrap and chill for an hour or two.

Melt butter in a pan on medium heat, add the onion and cook for about a minute. Stir in flour, salt and pepper. Slowly add the broth and milk, stirring continuously. Turn the heat up and bring to a boil, continuing to stir. Turn the heat off and mix in the chicken pieces, veggies and chopped jalapenõs.

Take the dough out and roll one half of the pieces thin to fit a pie pan. Fold the pan over the rolled dough and cut around. Then roll some more. Press in pan and keep aside. For the top lie-crust layer, take about 2/3 of the remaining piece of dough and shape it like one of your face masks with straps and all, replacing pieces of cinnamon sticks and cloves for thread to make pleats. Fork 100 holes in the mask and keep aside.

Pour the pie-filling into the pie pan, and place the face-mask-shaped dough in the center. Then roll and shape the remaining 1/3 piece of dough to fit the circumference of the pie pan, leaving a small opening between it and the mask-shaped dough. Pinch edges and bake at 425 F for 35-40 minutes, till the crust is golden brown and you can see the filling bubbling through the opening. Serve with fresh salad.

Discomfort Foods uses the medium of ingredients, measurements and textures to communicate the state of the planet and its occupants, in the process creating new food memories and associations. For this recipe, for instance, I have stayed true to the comfort-food taste of chicken pot pie, but introduced an element of discomfort by establishing new livelihood-policy associations with the ingredients — dairy, chicken and veggies, decorating it with a 100-holed face mask, and adding jalapenõs. (This was first published in Peace Data)