Official release: CODEPINK NYC pink police to wait for President Bush outside U.N., call for his arrest on war crimes! 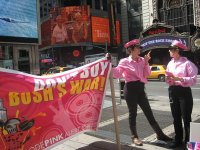 CODEPINK NYC pink police to wait for President Bush outside U.N., call for his arrest on war crimes!

NEW YORK -- While George W. Bush addresses the U.N. General Assembly, the CODEPINK "pink police squad" will wait for him outside and call for his arrest on international war crimes.

At 9:30 a.m. Sept. 23, CODEPINK members dressed in pink police hats and badges, with whistles and signs, will demonstrate their desire to arrest Pres. Bush and to see him tried by the International Criminal Tribunal in the Hague for launching a war of aggression, sanctioning the use of torture (considered a violation of international law by the United Nations), and flying detainees to "black sites" as part of a secret rendition program.

"We hold George W. Bush directly responsible for the illegal and unnecessary war against and occupation of Iraq, a war that has resulted in the violent deaths of over 100,000 Iraqi civilians," said Nancy Kricorian, coordinator of CODEPINK NYC. "So Pink Peace Officers will be outside the U.N. where the President will be speaking to the U.N. General Assembly letting people know that one of the world's biggest war criminals is in town."

In 2003 then U.N. Secretary General Kofi Annan called the war in Iraq a violation of the UN Charter and therefore "illegal." A war of aggression refers to any war not initiated out of self-defense or sanctioned by the UN. The Iraq war has resulted in the violent deaths of an estimated 1,000,000 Iraqis and over 3,800 U.S. military personnel and has cost American taxpayers over $450 billion dollars. The Bush administration designated suspected Al Qaeda and Taliban members as "unlawful combatants" who were therefore not protected under the Geneva Conventions. On May 19, 2006, the UN Committee against Torture issued a report stating the USA should stop "ill-treatment" of detainees, since such treatment, according to the UN-report, violates international law. It also calls for cessation of the US-termed "enhanced interrogation" techniques, as the UN sees these methods as a form of torture. Under international law, rendition as practiced by the U.S. government is illegal. The UN's 2006 report also admonishes against secret prisons, the use of which is considered as tantamount to torture.

This is not the first time Americans have moved to arrest the president for crimes. In March, voters in two Vermont towns approved a measure to instruct police to arrest President George W. Bush and Vice President Dick Cheney for "crimes against our Constitution" including the sanction of illegal wiretapping of citizens. State lawmakers have passed nonbinding resolutions to end the war in Iraq and impeach Bush and Cheney, and several towns have also passed resolutions of impeachment.