From arresting war criminals to promoting healthcare not warfare to actions to lift the siege on Gaza, October was a busy month at CODEPINK!

Bird-dogging, a CODEPINK tradition, provided dramatic highlights for October:
Dallas, Texas area PINKers Nel and Leslie took on confronting War Criminal-in-Chief Bush at a motivational speakers' gathering. After showing their "ARREST BUSH" banner right in front of the stage as Bush was "motivating", they were escorted out and yelled out: "Bush is NOT inspirational! On his watch: Abu Ghraib, Katrina, 9/11, Gitmo, torture, lies, rendition, illegal spying, illegal, immoral war. Bush is NOT inspirational! He's a war criminal! Torture is illegal!"
See their brave actions here!

Bay Area local PINK stalwart Cynthia Papermaster reported on bird-dogging war criminals:  CODEPINK's Golden Gate Chapter has been working intensely on accountability and justice for former officials and torture policy architects who lied us into a war, tortured, and violated our civil rights. From camping outside Dick Cheney's house in McLean, VA to protesting in torture architect Judge Jay Bybee in the Ninth Circuit Court rooms in seven cities (Pasadena, San Francisco, Seattle, Portland, Las Vegas, Honolulu, and Anchorage), to confronting Condi Rice at Stanford University with bloody hands, these women are busy!  Since May the group has been protesting torture adviser and current UC Berkeley law professor John Yoo at his house, and, starting in August, at his classroom.  Read about it in the Cal newspaper here!

Former prime minister of Israel Ehud Olmert, responsible for the atrocities of last winter's assault on Gaza, was confronted with protesters all along his US speaking tour in Chicago, San Francisco and Arkansas. The inside action video from SF has been seen by over 65,000 viewers on YouTube.  Gaza Freedom March student outreach coordinator Ali Glenesk held up bloody hands when she disrupted.  CODEPINKers Nancy Mancias and Rae Abileah unfurled pink banners.  (Read the arrest warrant for Ehud Olmert on our PINKTank Blog.) A large outside contingent did street theater, held banners, shouted and chanted.

We announced the release of a PINK War Criminals Card Deck (pre-order yours now here -- and email Paris your mailing address so you get them!) and set up a War Criminals Watch calendar (email Marina if you hear of a war criminal coming to town!). 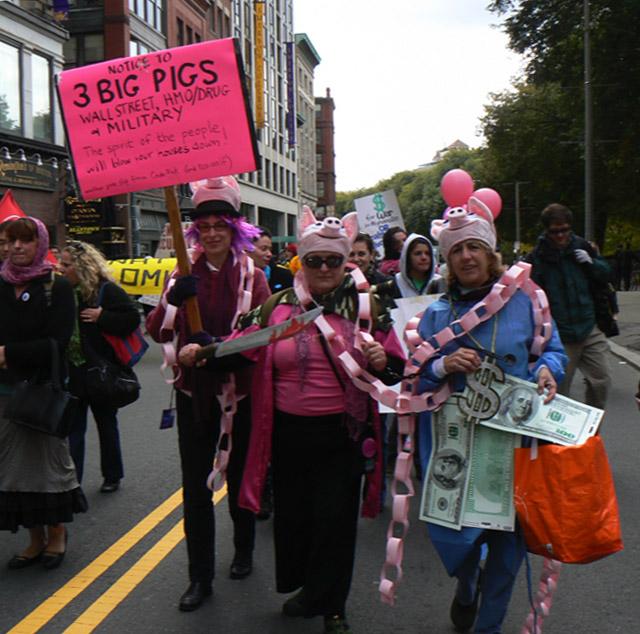 The news that President Obama had been awarded the Nobel Peace Prize kicked our "Remind Obama" campaign into overdrive. We unfurled banners reading "President Obama: End Bush's Wars!" and "End the Afghan Quagmire" behind Tiger Woods at the President's Cup golf tournament. When the Democratic standard bearer spoke at a party fundraiser at St. Francis Hotel, we capped off an amazing week of actions by hand delivering our petition from Afghan and American women to President Obama himself, urging him to keep his promises for peace.

Mid-month, the October 17 rallies and marches against the wars in Iraq and Afghanistan drew CODEPINKers out into the streets in Pittsburgh, Boston (see pic at right) and San Francisco. We marched, tabled, flyered, networked and, in Boston, listened to RAWA leader Zoya give a strong message for US troops out of Afghanistan. That evening, Sacramento-Yolo county local coordinator Heather Woodford organized a fun, successful counter-recruitment event: Draft Beer, Not Kids.

Healthcare not Warfare
Healthcare sit-ins: Our healthcare not warfare signs and banners got a workout, as the struggle over single-payer and public option in Obama's plan continued. In LA, we brought our messages to Congresswoman Jane Harman's attention. CODEPINK's emphasis on humor was in evidence at this Capitol Hill protest.

Peace is Green
The climate justice movement's worldwide actions on October 24, International Day of Climate Action, garnered participation from CODEPINKers in Phoenix, San Francisco, DC and Toronto. Our Canadian pinkers are bringing attention to the heavy environmental costs of war and militarism with a focus on the book "The Green Zone: The Environmental Costs of Militarism".

Halloween in PINK
In DC, CODEPINKers demonstrated outside the White House demonstrating against the wars in Iraq and Afghanistan. NYC CODEPINKers showed up at Ricky's beauty and costume stores boycotting their sales of Ahava Dead Sea products made in occupied Palestine.  In Montreal, Tadamon! Palestinian solidarity group launched their boycott of Ahava outside The Bay department store, dressed in full Halloween garb. In Arizona and Washington State, CODEPINKers delivered letters to store managers to asking them to remove Ahava's illegal products from their shelves, in solidarity with the Montreal and NYC actions. In SF, CODEPINKers joined in Iraq Veterans Against the War's Make Drag, not War! Drag Show, showcasing fashion resistance to militarism and fundraising for a delegation of conscientious objectors and vets traveling to Israel and Palestine this month to meet with their peace activist counterparts there.

Gaza Freedom March Update
Already about 500 people from over 30 countries have signed up to march with us in Gaza! Among the "notables" already committed to joining us are Pulitzer Prize-winning novelist Alice Walker; Syrian actor Duraid Lahham; former Japanese ambassador to Lebanon Naoto Amaki (who will be leading a delegation of eight including CODEPINK Osaka women); and Philippine intellectual and National Assembly member Walden Bello, and Center for Constitutional Rights President Michael Ratner. CODEPINK will organize a women's contingent which will connect with women's organizations in Gaza, focus on women's needs and will also work together on a mosaic mural in Gaza City.  Can you adopt a student to go on the march?  Email Rae for a list of students seeking funds to make their trip a reality!

Save the date!  December 27 will mark one year since the deadly 22-day Israeli assault on Gaza.  The Gaza Freedom March coalition is coordinating solidarity actions around the world to spell out "Free Gaza". To sign up email Nancy at  [email protected]

We're looking forward to an equally active month of November, as Afghan parliamentarian and feminist leader Malalai Joya will speak in several of our communities on her national book tour for "A Woman Among Warlords" and a group of Bay Area CODEPINKers will fast for Thanksgiving at the gates of Creech Air Force Base, where young pilots are trained to control drones.