Occupy Wall Street Day 5: This is What Democracy Looks Like

After yesterday's rain and violent arrests, I’m afraid of what to expect as I approach Liberty Plaza for the fifth day of Occupy Wall Street. Mainstream media report that numbers have dwindled; our own media's livestream was shut down yesterday while people were arrested for trying to cover the equipment with tarps. I am bracing myself for a sad, soggy, mess. 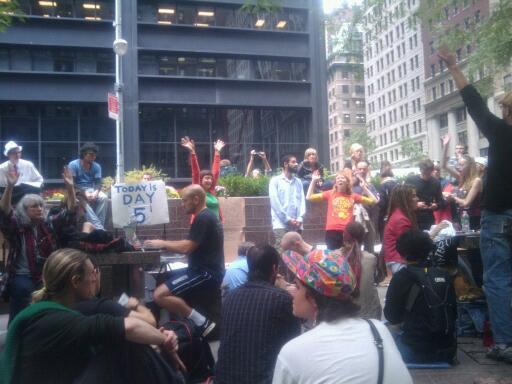 I arrive and it’s beautiful. Everything is cleaner, more organized and more vibrant than I left it. Spirits are high in the General Assembly (GA) and even nature is cooperating, lending us a little sunlight. Since Justin was arrested yesterday for using a megaphone the GA has adopted a system of self-amplification referred to as the “people’s microphone.” A new speaker begins by testing the volume – “MIKE CHECK!” and everyone within hearing distance echoes in unison: “MIKE CHECK!” People are becoming accustomed to speaking in brief, clear, beats and hearing their words reflected back to them by their peers – a democratic improvement on the megaphone. As one cardboard sign says, REVOLUTION IS EVOLUTION. 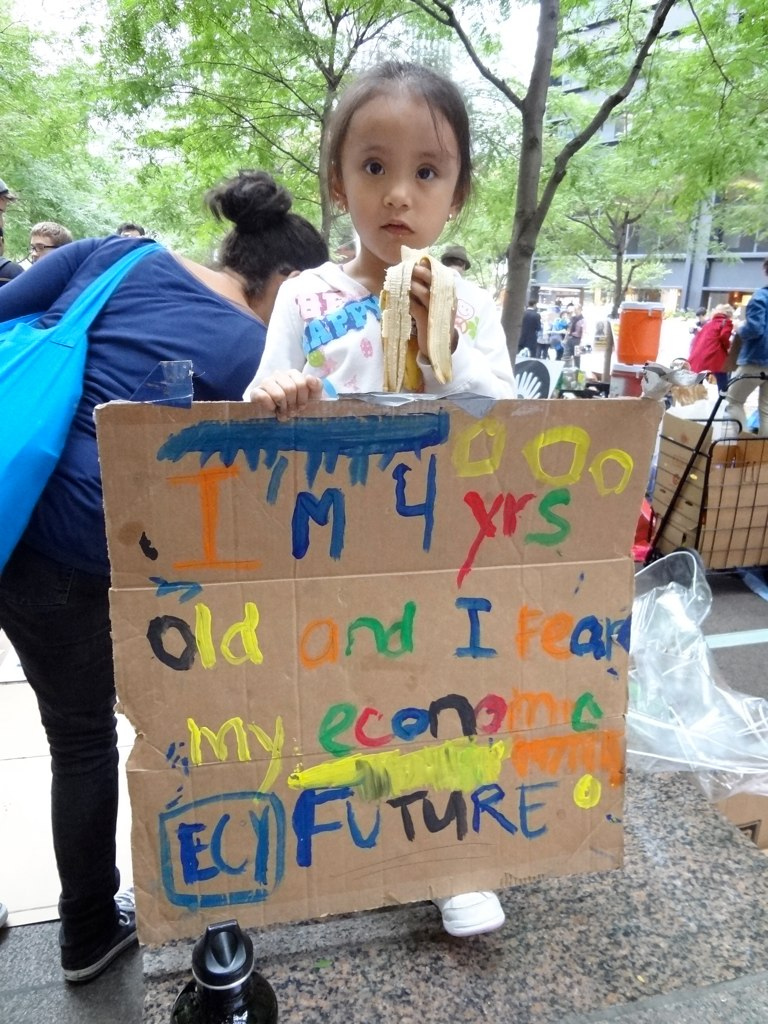 The GA welcomes back one of yesterday’s arrestees, who reports that she was hospitalized after the NYPD denied her access to prescription medication and told her she was suicidal when she demanded information about her brother, who was also arrested. A member of the medical team tells me another arestee has deep wounds where his wrists were bound with zip-ties so tight that police officers had to use needle-nosed pliers to sever them, further mauling his wrists in the process. Everyone who has been arrested during our peaceful protest has returned to Liberty Plaza upon being released.

A GA facilitator asks for a “vibes check:” we signal good vibes all around. People are naturally and intuitively adopting the many hand gestures we've developed to communicate: “I agree/I feel good about that”, “I disagree/I feel bad about that”, “I have a direct response,” “I block 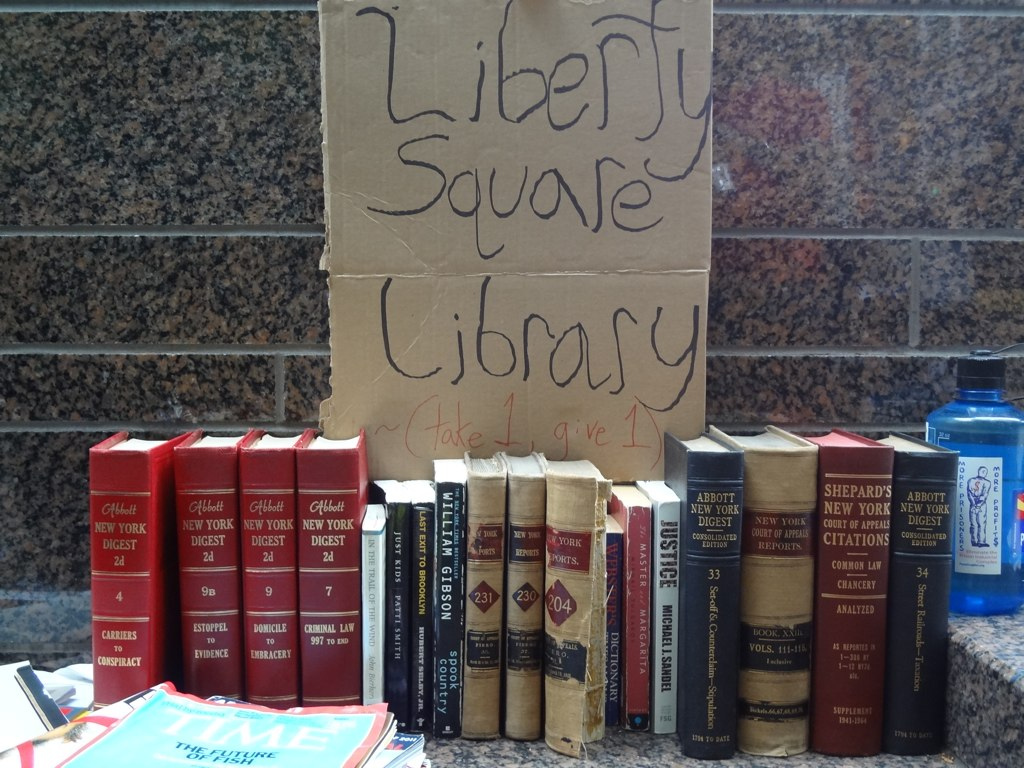 that idea,” “point of process,” “point of information,” “shorten your sentences,” and “I’d like to be put on the speakers’ stack.” The young woman taking stack informs us that most of the speakers thus far have been men, and asks if any non-male identifying participants would like to speak. Grateful for the invitation, I take the opportunity to wish everyone a happy International Peace Day and announce a rally to support Bradley Manning organized by CODEPINK and other peace groups for this Friday. People take fliers and signal their support by wiggling their fingers towards the sky. In Liberty Plaza, we are all Bradley Manning. 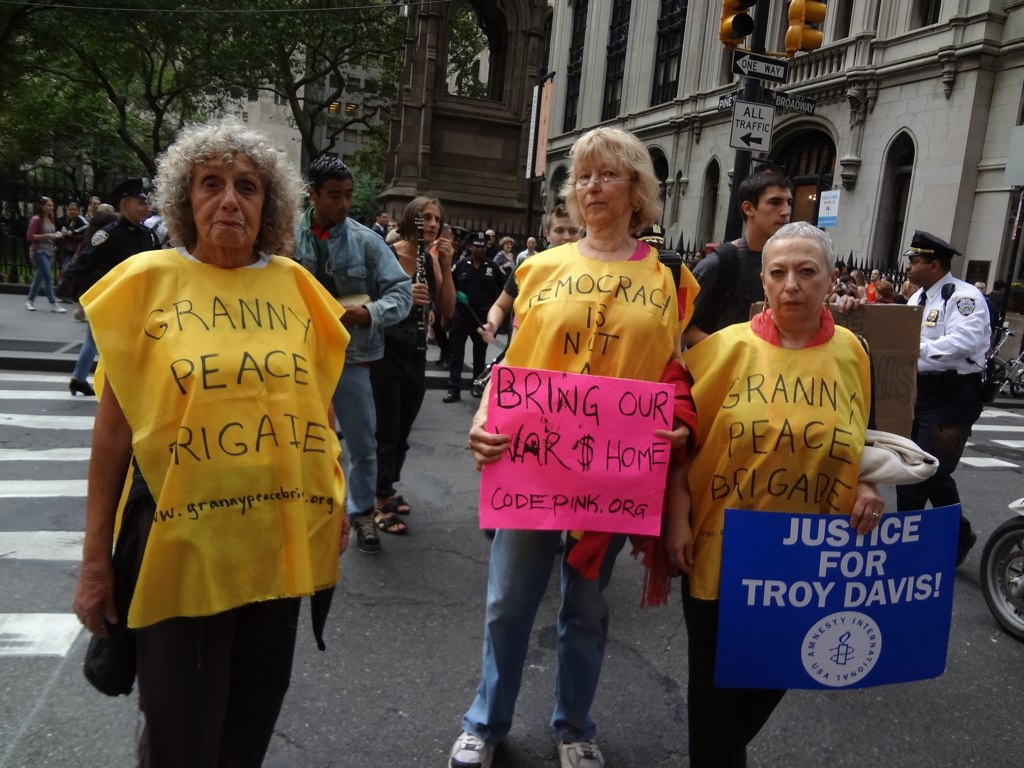 As people are leaving work we march on Wall Street, led by the bombastic musical stylings of the Rude Mechanical Orchestra. I march with Eva-Lee, a seasoned CODEPINKer and member of the Granny Peace Brigade. She is in awe of what young people are doing and says it's unlike any other demonstration she’s experienced:

“it’s the process even more than the issues. I’m just blown away by how people are treating each other!” 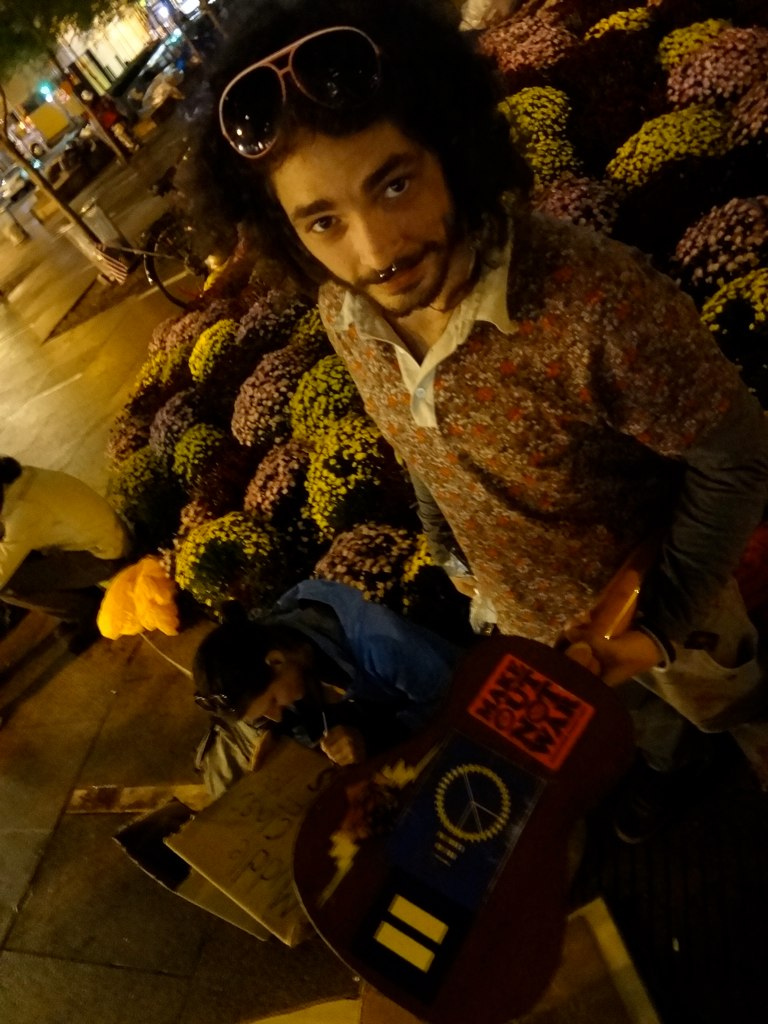 During the evening GA the Principles Committee passes around copies of a framework they’ve prepared for discussion: “Principles of Solidarity [Working Draft of Consolidated points for Discussion].” Someone voices a concern: the media is so desperate for any kind

of statement from us that they will take this and use it to represent us. The point resonates with the GA. I share the concern that the document

will be misinterpreted as a set of demands, which continue to be the focal point for most interviewers asking me about the demonstration, and decide not to post my photo of the document online.

A member of the committee, who tells us he stayed up until 3 am drafting the document, responds to the questions ermerging from the GA. His words resound through the plaza, as the people's microphone brings us back together:


The GA break into small groups to discuss the document. At 9:50 pm someone interrupts with an emergency announcement: Jerry of Ben and Jerry’s has donated 4 cases of ice cream to the demonstration. 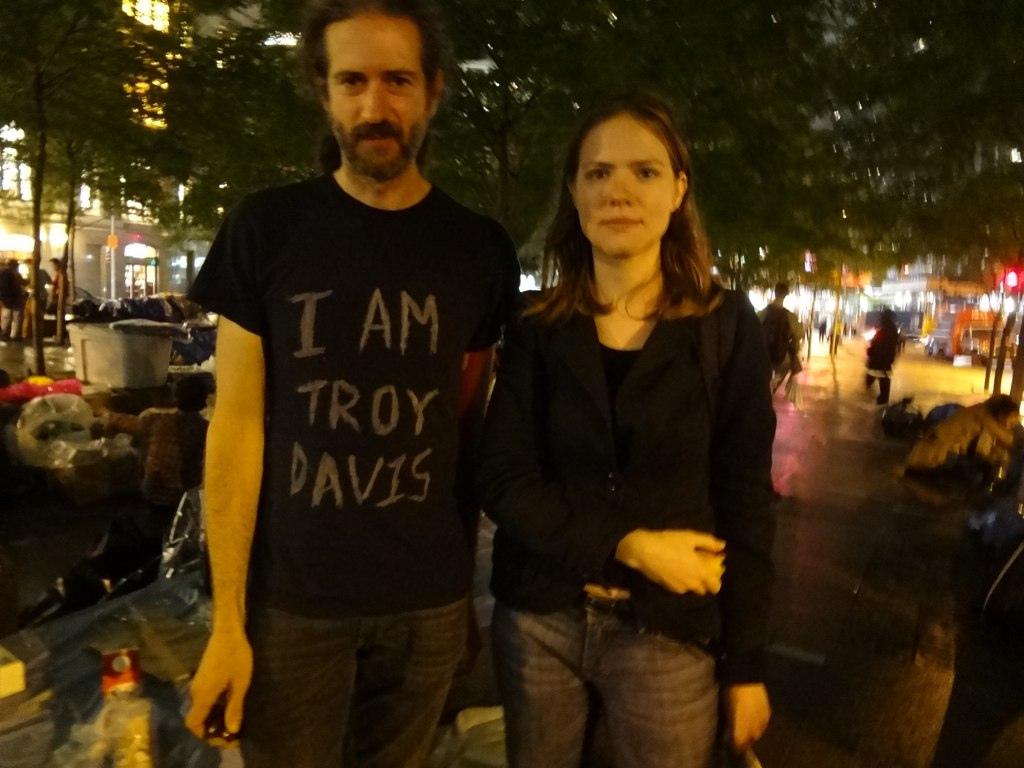 As we continue to hash out the principles, people bring around tray after tray of small bowls of rum raisin, chocolate, and cookie dough. Throughout the GA people have been circulating to distribute apples and collect trash

. I continue to be amazed at how this rag-tag collection of unemployed, underemployed,

debt-ridden souls manages to feed thousands of people and accomplish what our government does not: caring for each other’s basic needs and engaging in true democracy. The twitter hashtag #needsoftheoccupiers solicits everything from independent journalists to extension cords to birthday cake:

"@OccupyWallStNYC: Member of legal team's wife's birthday. He spent it here defending us. Can somebody send a cake here tomorrow? #needsoftheoccupiers"

At 10:33 pm we receive another emergency announcement: someone has just learned via text message that Troy Davis will be executed in 20 minutes. The announcement chills the square, as his last words resonate through our bodies and voices:


We have a moment of silence. I take the hands of the once-strangers sitting on either side of me. I hear people crying. Rain starts to fall. The peoples' microphone speaks:


Some decide to march to the courthouse. We make sure they are accompanied by a camera and a member of the legal team and send them on their way.


It’s well after midnight. We have not made it through the Principles of Solidarity – at least not on paper. More food arrives: delicious-looking salads, snacks, fruit and vegetable smoothies. The friendly people in our new-and-improved kitchen station promote their offerings, ask what else we need (nothing – we have more than enough!) and encourage everyone to eat. No-one will go hungry in Liberty Plaza. I see the bike bloc leaving for their nightly run and signal with my bell I’d like to join them. They wait patiently as the marchers return and people light candles. I hear the people’s mic propose changing the name of Liberty Plaza to Troy Davis Square. 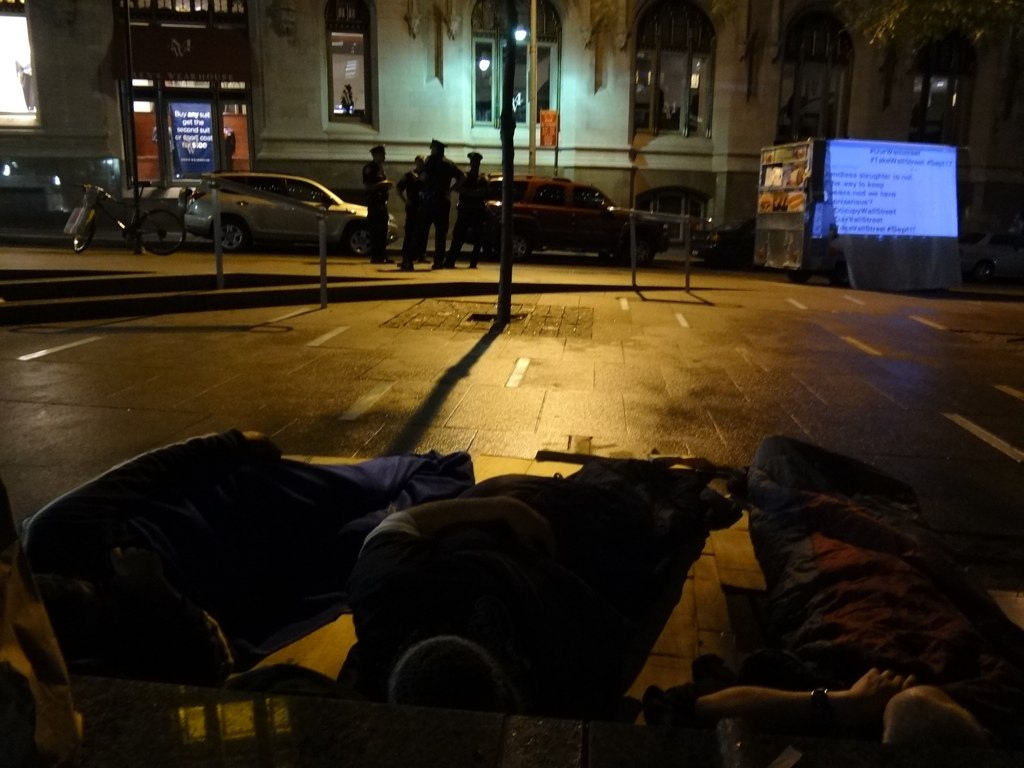 We ride past the line of police guarding the metal barricades still blocking Wall Street: me in my pink, Joe at my side in rainbow knee-high stockings. The scene reminds me of an iconic image of a CODEPINKer piercing through a line of riot police with a smile and a pink feather boa -- an inspiring symbol of our power to disarm the military industrial complex with humor and positive energy. I sail through the financial district with renewed faith in our mission to bring our war dollars home where they belong and resist the endless funding of death and destruction.

The police may have succeeded in occupying Wall Street with fear and violence, but we have succeeded in exposing their commitment to protecting corporate greed over human need. Together with our friends in Liberty Plaza, we are creating an alternative, peaceful, vision based on beauty, joy, and hope.